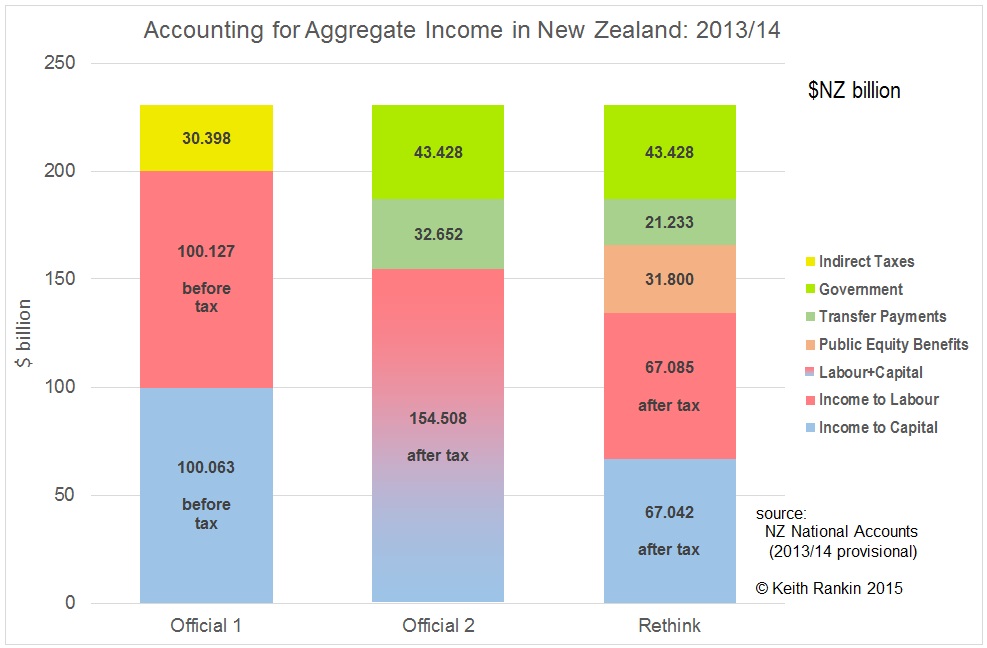 My most recent chart (New Zealand Income Shares 2013/14, 21 October) in my Chart for this Weekseries on Evening Report shows the four-way division of income in New Zealand for the year ended March 2014. The data is from the National Accounts of New Zealand has been straightened out by revealing the full extent of the public shares.

In the national accounts, as they are officially presented, the majority of the public share is obscured, under the name ‘secondary income’. Secondary government income is essentially income tax, including company tax. In the official presentation of the national accounts, a tiny government ‘primary share’ is acknowledged – essentially GST, excise taxes and customs duties. Otherwise, the impression given is that income distribution is essentially a private affair, despite the general acceptance that public resources and cultures play the critical role in determining the difference between rich economies and poor economies.

If we combine ‘secondary’ government income with primary government income, we see the statistical emergence of a genuine public income sector. In the middle part of my chart, income is split almost exactly in thirds, between the public, labour and capital. Green (public), red (labour) and blue (capital).

A careful analysis shows that this boundary between public and private is quite arbitrary. Tax breaks in particular are presented as private income when in reality they represent allocations of income subject to government caprice.

So the right-hand part of the chart (labelled “rethink”) presents a principled division between public and private income, based on existing reality. This is not a wish-list; it’s recent (2013-14) reality subject to a little re-illumination. The private shares are calculated by deducting a 33 percent tax from the private shares on the left-side of the chart. (The core income tax rate in New Zealand is 33 percent, and has been since 1988. 33 percent if anything understates the contribution of public domain assets to New Zealand’s wealth.)

The ‘rethink’ column of the chart shows private income at just over $134 billion dollars, 58 percent of total income generated in New Zealand in that year. Private income is almost exactly equally split between labour and capital.

The remaining 42 percent of income is now split (green and orange) between government spending (‘polis’, green) and payments returned to the people on an essentially universal basis (‘demos’, orange), as “public equity benefits”.

(The principal mechanism through which these payments are made today is through income tax concessions. The secondary mechanisms are through a social security system that still retains its founding ‘cradle-to-grave’ universal ethos, and through Inland Revenue administered “tax credits” paid to caregivers of children.)

Part of the public share remains ambiguous in the ‘rethink’ column; this is ‘transfer payments’ which are cash payments paid through political discretion rather than as a right of ‘economic residence’. It’s not clear whether they should be classed as polis or demos. While in the chart I have opted for polis (public income essentially retained by government and given out through political criteria), payments paid universally on the basis of age only come especially close to being people payments rather than government outlays.

The power of this chart lies in what it means for the future. Through an open acceptance that there are essentially four grand income divisions of the ‘economic cake’, we can think about which of those divisions could get larger and which will get smaller in a progressive vision of the future.

In the conventionally-understood three-way division of income with its emphasis on private over public property rights, the labour share can only be maintained under conditions of rapid economic growth. Under other more sustainable conditions, the labour share necessarily falls as labour loses its negotiating power. The problem is, if the ‘state share’ is to be constrained, that simply means a rising private capital share. Thus the dystopic trichotomy is unsustainable growth versus big brother government versus the plutocracy of capital. None of those features are appealing.

However, once we introduce (reveal) the fourth income share (‘demos’, the people; the non-state component of the public division of income), then everything changes. We can become optimistic again for the future of the planet and its people.

If the fall of the labour share is inevitable – as I think most of us recognise that it is, even if we sometimes pretend otherwise – then the falling labour share can be offset by the rise of the ‘people share’ (demos). The capital and government shares can remain much as they are.

In my chart, the people’s share is modest, 14 percent of national income (enough to pay three-and-a-half million adults a public equity dividend of $175 per week).

Arguably it should be higher than 14 percent. For the present, it doesn’t much matter. What does matter is that this share – as a growing share – is humanity’s hope for the future. I can see no reason why anybody of any political persuasion should feel threatened by the emergence of a people’s income share within the wider rubric of a public share that needs to grow as the labour share declines.