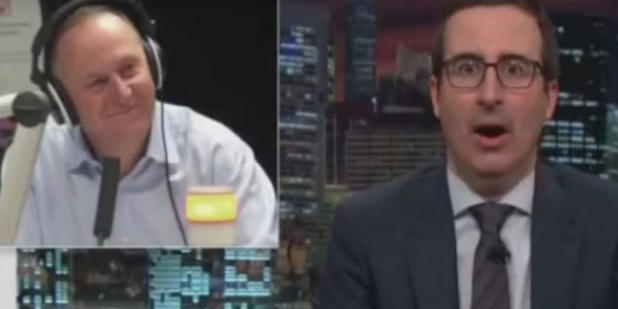 John Oliver thinks John Key’s ‘wees’ interview is amazing
John Key’s admission that he wees in the shower to a morning radio show is the “greatest political interview of all time,” according to John Oliver.

Last week, Key took part in Hauraki Breakfast’s game ‘Thank You For Your Honesty’ in which hosts Matt Heath, Jeremy Wells and Laura McGoldrick grill participants with a series of 10 silly, often rude, questions, which they then have to answer truthfully.

Key admitted that he’d stolen stuff, did wees in the shower and that he didn’t think the Virgin Mary was a virgin. However, he didn’t “trim his downstairs” and neither had he sent a “dick pic”.

British comedian and Last Week Tonight host John Oliver joked the segment was “the greatest political interview of all time”.

Beyond Oliver’s mocking is the reality of what he is highlighting. Key loves soft interviews on commercial radio stations, it allows him to joke it up with the masses without being challenged for 305 000 kids in poverty, the mass surveillance state and signing away political sovereignty with the TPPA.

It’s difficult to drag the Prime Minister back to issues of an Orwellian Big Brother state where the rich get richer and the poor get nothing when he’s joking about how often he urinates in his own shower or touches his penis for pleasure.

Which of course is the whole point of him appearing on these shows.