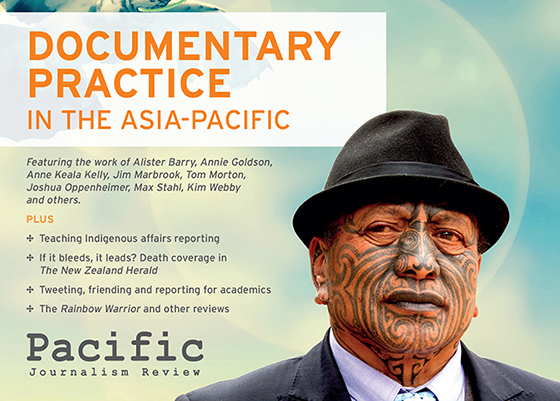 The rise of popular factual television has threatened the key claim on “reality” of documentary practice but there is hope on the horizon in the post-documentary era, says Pacific Journalism Review in the latest edition published this week.

The October edition examines the state of documentary practice in the Asia-Pacific region and also profiles the work of many contemporary filmmakers.

He adds that a “troubling implication is that post-documentary forms threaten the legitimacy and credibility of the documentary tradition as a whole.”

King notes that one symptom of this “tangible appetite can be found in the rise of citizen journalism, which, however evaluated, still answers to civic impulse”. The surveillance of authorities also boosted this eyewitness function.

“On the other hand, it can become merely a form of self-promotion, as in the case of the selfie and celebrity-centric Twitter.”

But King also observes on the positive side that some documentary makers are welcoming the opportunities by digital media to “significantly reduce production costs and open up new means of distribute their work online”.

‘Views from the field’
Introducing a section on “Views from the field” from filmmakers, co-editor Professor Annie Goldson, herself one of New Zealand’s leading documentary makers, reflectively analyses her own body of work over many years in the context of contemporary filmmaking challenges and developments.

She argues positively that “long-form creative documentary has re-emerged on the cinema screen, and, of course, online”.

“Filmmakers are able to take more political and formal risks than television traditionally permitted, breaking from notions of balance and objectivity,” she adds.

This edition of PJR features the work of Asia-Pacific filmmakers and radio documentary makers such as Anne Keala Kelly (Noho Hewa: The Wrongful Occupation of Hawai’i), Jim Marbrook (The Dark Horse and Cap Bocage), Tom Morton, Joshua Oppenheimer (The Act of Killing), Max Stahl (Bloodshot: The Dreams and Nightmares of East Timor) and Kim Webby (The Price of Peace).

The journal also features a series of unthemed articles such as on “the sense of place” in indigenous affairs reporting, death coverage in The New Zealand Herald, and tweeting, friending and reporting for media academics and a large review section coordinated with edition managing editor Professor David Robie and reviews editor Dr Philip Cass.

The edition is the second volume in the two-part series based on papers from the PJR2014 conference marking 20 years of publication of Pacific Journalism Review.