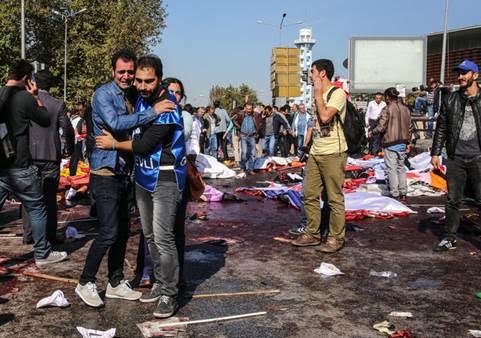 THIRTY-SIX HOURS AGO (11/10/15) in the Turkish capital, Ankara, 128 were killed in a double-barrelled terrorist attack. Two bombs exploded in quick succession in the middle of a peace demonstration. Most of the casualties came from Turkey’s Kurdish minority, many of whom were also members of the pro-Kurdish HDP (Peoples Democratic Party) campaigning for an end to renewed fighting between the Turkish Government and the military formations of the PKK (Kurdistan Workers Party). At the time of writing, no individual or group had claimed responsibility for the attack, but official Turkish sources were quick to blame the outrage on suicide bombers from Islamic State (IS).

Twenty-four hours after the bombs exploded, fighter-bombers of the Turkish Air Force struck back against targets in Iraq and Syria. Now, a reasonable person might suppose that those attacked would be the alleged planners and perpetrators of the terrorist attack – Islamic State. Surely, if the Turkish Government believed IS responsible for inflicting mass death and injury upon its citizens, it wouldn’t send its jets against anyone else?

But, as is so often the case with the behaviour of states, reason turns out to be no guide at all. Because those Turkish jets weren’t sent to exact retribution from IS, but from the PKK. That’s right, the Turkish Government’s way of honouring its dead Kurdish citizens was to escalate the very same civil conflict they had died trying to end. To order something like that takes a special kind of cynicism.

Small wonder that many Turks reject entirely the whole notion that the bombings were the work of Islamic State. They point to the similarities between this latest outrage and the terrorist attack that reignited the war with the PKK a few months back. On that occasion, too, IS was accused of attacking a gathering of mostly young socialists belonging to the HDP. As always, the question to ask is: Cui bono? Who benefits? The answer then, and now, is an increasingly unpopular, religiously-inspired authoritarian government desperate to recover its waning political support. Namely, the Justice and Development Party government presided over by the man who has dominated Turkish politics since 2003, Recep Tayyip Erdogan.

Certainly, the tens of thousands of Ankarans who poured onto the streets in the hours following the bombings were absolutely sure who was responsible for the worst ever terrorist attack on the Turkish Republic. “Chief and Murderer Erdogan! Death to Fascism!” chanted the throngs of red-flag waving members of EMEP (Turkish Labour Party) gathered in Central Ankara’s Sihhiye Square.

And the relevance of all this to New Zealand is – what? Turkey, in spite of its membership of NATO has never really been a working democracy. This latest attack is all very sad and everything – but what’s it got to do with us?

Well, first and foremost, it’s a warning. A timely reminder of the ruthless impulses toward self-preservation that define the fundamental operating procedures of all states. New Zealand is no exception in this regard. Confronted with a sufficiently serious challenge, the New Zealand State has never been slow to demonstrate it ruthlessness. 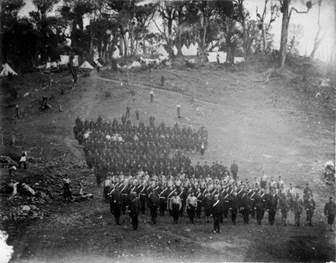 In 1881, in western Taranaki, a combined force of police and local militia totalling 1,600 men, invaded the little Maori town of Parihaka, destroyed the buildings, dispersed the inhabitants, arrested the community’s leaders, and detained them in Dunedin for 16 months without trial. Seventy years later, the New Zealand State, in the course of crushing the militant Waterside Workers Union, suspended the political and civil rights of its citizens for 151 days. An equally massive exercise in repressive policing was mounted in 1981 to ensure the continuation of a tour by the Springbok rugby team from apartheid South Africa.

No one should ever be in the slightest doubt, therefore, that our own state – like all states – will do anything and everything to maintain the integrity of its core institutions. And, just in case you were wondering, the maintenance of citizens’ rights, and the preservation of democracy, form no part of that mission. A state’s core institutions are those responsible for maintaining the existing distribution of economic, social and political power. Or, to put it another way, those agencies to which the owners of society’s most valuable properties turn if their interests are threatened. At a minimum these include the courts, the police, the security services and the armed forces. A more expansive definition might include the news media, along with those conservative social institutions most readily enrolled in the State’s defence: farmers organisations, business associations, service and sports clubs, and, of course, right-wing political parties.

Turkey is a much larger state than New Zealand, and the economic and social crises through which it is passing – most particularly the conflicting demands of nationalism, secularism, Islamic religiosity and socialism – may appear to dwarf our own. But were this country to slide even a little from its present course: were ethnic and/or class-based political mass movements to assert themselves too energetically; then the ruthless internal logic of our own state’s core institutions may be relied upon to generate results every bit as explosive – and tragic –as Ankara’s.