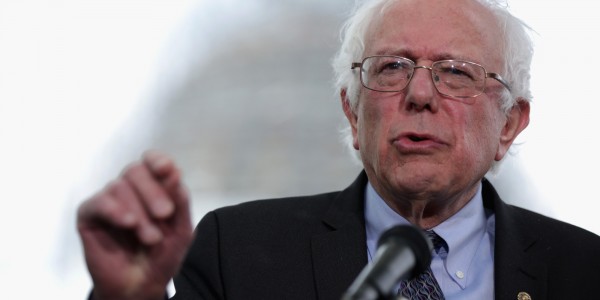 I was pleased to watch the half-hour interview with Bernie Sanders – United States Democratic presidential candidate – screened on Three60 on 4 October 2015. The final question asked was whether Sanders could support the introduction of a Universal Basic Income (UBI) in the United States. Sanders’ answer was a qualified ‘yes’, though I was not convinced that he fully appreciated what a UBI was and was not. Of most interest is that the UBI s on the global radar at present, as it never has been in the past.

While I do not claim to be the first person to ever use the term, it was my coining of the name Universal Basic Income in 1991 that led to the worldwide growth of the concept under that particular name. It was after I attended the Basic Income European Network (now ‘Basic Income Earth Network’) conference in Vienna in 1996 that this name permeated to a wider than New Zealand audience, in particular as a result of long-time Basic Income proponents Philippe van Parijs and Guy Standing – intellectual leaders within the BIEN movement – adopting the name subsequent to the Vienna conference.

My paper at that conference – Constructing a Social Wage and a Social Dividend from New Zealand’s tax-benefit system – did not include the name ‘Universal Basic Income’ in its title. But UBI was the central concept which I defined in that paper as: “A full universal basic income (UBI) is an adequate social dividend, equivalent to at least an unemployment benefit”. While my main concern in then was to promote the more general concept of ‘social dividend’ (or, in my more recent writing, ‘public equity dividend’), it is clear that the nuances around the name ‘universal basic income’ resonated with the international audience. One reason, I suggest, is that this name avoids the words ‘minimum’ and ‘guarantee’. Further, the word ‘universal’ has a wider reach than the word ‘unconditional’. “Unconditional’ sounds to too many ears like a freebie that others pay for, whereas ‘universal’ more easily blends with a ‘property rights’ approach.

(Other pre-existing names for a ‘basic income’ included ‘demogrant’ and ‘refundable tax credit’. But they were not sexy, and did not reflect any underlying principle. It was the word ‘universal’ that gave the concept its underlying warmth and dignity.)

In order to move forward with an idea that has potential to break through policy impasses around poverty and inequality, the idea should be based on ‘sharing’ principles (such as those of equity within an organisation) that are widely held across the political spectrum, and should not be built around principles of ‘taking’ or ‘transferring’. That’s not to suggest that all income transfers are bad or wrong; rather it’s that a widely acceptable way forward needs to adopt redistributive transfers on its periphery rather than at its core.

A Universal basic Income is not a Guaranteed Minimum Income.

In December 1987, New Zealand Finance Minister Roger Douglas announced a new income tax system based on a ‘low flat tax’ (intimated to be about 23 cents in the dollar) and a Guaranteed Minimum Income (GMI). While the new system was scuppered two months later by David Lange, the compromise worked out still looked much like what Douglas wanted (albeit a 2-step rather than a 1-step tax scale), and it included a pared-down GMI called a GMFI (Guaranteed Minimum Family Income). The GMFI still exists in New Zealand, under the name ‘Minimum Family Tax Credit’.

The GMI was a top-up transfer; it was the antithesis of a universal payment. Only poor workers would receive it. And it came with a 100% ‘effective marginal tax rate’; meaning that nobody receiving a GMI could gain an increase in after-tax income.

The GMI proposal sounds deceptively similar to the Universal Basic Income; indeed both essentially work in conjunction with a flat rate of income tax. The most obvious giveaway is that a GMI is a highly targeted transfer payment that allows for a low single-rate income tax (eg a rate under 30 percent), of the type Roger Douglas wanted and the Act Party still does. A UBI on the other hand comes with a flat rate of income tax in the 33-45 percent tax range (or, as in Gareth Morgan’s version, comes with another form of tax in addition to a flat-rate income tax).

With a UBI, taxes are simple, high by neoliberal standards, and everybody (subject only to age and residency criteria) claims an equal share of that public revenue as a basic income. While a UBI should never be understood as the only form of publicly-sourced cash income (some ‘needs-based’ transfers will always be necessary) – and is a dividend rather than a ‘hand-out’ – for a substantial majority of the resident adult population, it would be their only publicly-sourced income.

A UBI on its own is not a cure for poverty. Rather, it’s a public-property-rights-based payment that incidentally serves as a hand-up rather than as a handout. Of particular importance is the additional bargaining power it gives to the relatively poor. It tides-over people during spells without income – like ‘strike pay’ once did – enabling them to hold out for fair private-sector wages; and it reduces pressure on self-employed people who might otherwise under-tender to get work. Of equal importance is the way it addresses the low-income poverty trap that accompanies all forms of targeted redistribution. The GMI accentuates the low-income trap. The UBI eliminates it.

My initial 1991 publication was The Universal Welfare State incorporating proposals for a Universal Basic Income. The paper incorporated a ‘pension’ – conceived in terms of the Australian usage of the term to mean a non-work-tested benefit – which in later papers I called ‘supplementary basic income’ (SBI; refer The Collective Valuation of Unpaid and Underpaid Work) or simply ‘supplementary benefit’ (as in A New Fiscal Contract? Constructing a Universal Basic Income and a Social Wage, Social Policy Journal of New Zealand: 1997).

Any attempt to make a universal basic income the only kind of cash benefit payable falls down because it is either too expensive or too meagre. I addressed the issue through making a ‘pension’ available for particular groups of people (especially retirees, lone parents, and persons with long-term health conditions). This pension would be an alternative higher UBI set at an amount comparable with New Zealand Superannuation, but subject to a higher flat tax than the normal UBI. Retired people, for example, would opt for this option if they had little private income, whereas richer retired people would be better off sticking with the regular UBI that applies to all adults.

My general view today is that supplementary payments should reflect the full range of circumstances of those in special need (and this could include a provision for debt-aid that falls short of bankruptcy), and should be ‘tapered’ or ‘abated’ at a consistent rate. Once a person’s private means are sufficiently high, then their disposable incomes would be simply gross private earnings reduced by a flat-rate tax (eg 35 percent), plus their universal basic income. Increased productivity over time – more outputs produced relative to inputs required – would be the principal cue for an increase in both the rate of income tax and the amount of universal basic income.

What if a country has a UBI with a graduated tax scale?

Consider this example. If New Zealand had a UBI of $10,000 per year and a very simple graduated tax scale (0% on the first $10,000 of income and 40% on remaining income) then that would be the same as having an unemployed person’s UBI of $10,000 alongside an employed person’s UBI of $14,000. (The extra $4,000 is the automatic tax discount that only ‘taxpayers’ can receive.) It cannot be called a universal basic income if poorer people get as of right less publicly-sourced income than richer people.

In New Zealand at present, if you try to introduce a UBI of $10,000 while maintaining or extending progressive income taxation you would just create a super-UBI for the rich. All persons in New Zealand earning over $70,000 per year already receive a UBI (in all but name) of $9,080 per year.

It’s great that the concept of Universal Basic Income is being raised with people standing for the world’s highest office: President of the USA. We – the citizens of the world – have to be vigilant however that other similar-sounding proposals are not confused with a universal basic income. We need to be particularly vigilant with respect to names like ‘Guaranteed Minimum Income’.

A UBI is a truly universal distribution of a substantial portion of public revenue – an equal payment to poor and to rich. It is affordable if it coexists with needs-based welfare, rather than being set so high as to cover all conceivable needs. It is funded by a proportional tax system that reflects the importance of tangible and intangible property in the public domain as complementary to private property.

On its own a universal tax-benefit regime cannot end poverty. Rather it creates a power-balance; and a dynamic that confers dignity and puts an end to poverty traps. It enables people to say ‘no’ to exploitation, and ‘yes’ to private initiatives that contribute to social and economic wellbeing; to initiatives that, among other things, raise productivity and thereby raise the future level of universal basic income payable.