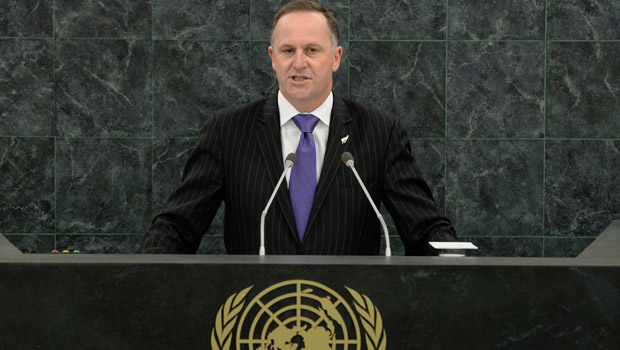 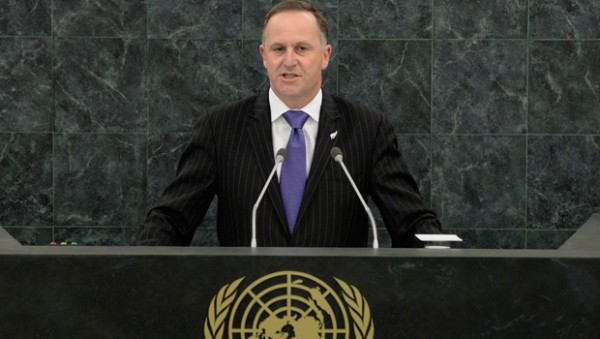 In his address to the seventieth UN General Assembly, New Zealand Prime Minister John Key referred to his own country 15 times – or 16, if you include his expression of pride in “the values and principles that underpin the country I lead.” His opening remarks even informed delegates that, “New Zealand is a small country at the bottom of the world”. Key then went on to boldly criticise the United Nations – in particular the Security Council – referring to suffering in the Middle East that demonstrated, he said, “how far we are from achieving the aspirations of our founders and of today’s members.” He went on to assert that the UN seventieth anniversary meeting was taking place “against the backdrop of the worst refugee crisis since World War Two”, noting that this was the consequence of “the Security Council’s failure to act over the past four years.” The past four years?

The appalling Middle East refugee tragedy actually began in 1948 with Israel’s expulsion of the Palestinian people. If John Key didn’t know that fact of history, then his speech-writers certainly let him down badly. Many ethnically-cleansed Palestinians have ended up in Syria’s Marmouk refugee camp; Lyse Doucet, chief international correspondent for the BBC, visited the refugees there last year, and described the plight of Palestinians in the camp and how armed men struggled “to contain a crowd desperate to reach a UN food distribution point” in a “desolate wasteland of utter ruin.” Ever since the catastrophe that dispossessed the native Palestinians, the Security Council’s failure to act has enabled the denial of justice to continue. In his speech, Key made ten references to Syria, speaking of it by name. However, he chose to avoid directly mentioning both Israel and Palestine, even though his speech had devoted more than a third of its length to the Middle East. The closest John Key could bring himself to mentioning Israel and Palestine was a passing reference to what he referred to as the “Middle East Peace Process.”

Key’s apparently tenuous grasp of Middle East affairs showed itself again when he told the delegates of “the evil nightmare of ISIL . . . that first took hold in Syria”. Of course, the establishment of ISIL began in Iraq at the time of the US-led attack on that country in 2003. The terrorist group began by calling itself the Islamic State of Iraq. It was when the war in Syria began that ISIL militants (then known as ISI) allied themselves to the Western-backed Syrian opposition to bring down the Syrian Government; it was only later that the group changed its name to ISIL. In November 2013, ISIL stormed Raqqa and forced out militants from the self-styled Free Syrian Army. Also that month, the anti-Assad Syrian Observatory for Human Rights (SOHR) stated: “ISIL is the strongest group in Northern Syria . . .” Iraq blames the West’s ally, Saudi Arabia, for helping to arm and finance ISIL.

In his address, John Key also reminded the UN delegates that “it’s time for members to set aside their vested interests and historical alliances in order to stop the violence and end the suffering.” But will he really step away from ‘the club’ he so clearly appears to support? The selectivity and misinformation embodied in his speech must be cause for concern. While Key quite rightly condemned ISIL’s “warped ideology” that had “. . . spread death and terror into the region and beyond”, he seemed oblivious to the Zionist ideology that has, for decades, also spread death and terror into the region and beyond. For the Palestinian people, Zionist expansionism has certainly proved to be an evil nightmare and it has been sowing the seeds of ever-growing instability in the Middle East for the past 67 years. The Security Council has repeatedly condemned Israel for its failure to respect Security Council resolutions and the provisions of the Fourth Geneva Convention, in particular by committing criminal acts in occupied territory. The Security Council has also condemned “desecration and profanation” of the Holy Al-Aqsa Mosque, the transfer of Israel’s civilian population into occupied Palestinian territory and the killing, wounding and expulsion of defenceless Palestinian civilians.

John Key told the UN General Assembly that the Security Council must “stop talking about what’s right and do what’s right.” The dozens of resolutions passed by the Security Council condemning Israeli human rights abuses and Zionist racism would fit the description of “talking about what’s right”. Doing “what’s right” would, for a start, necessitate the imposition of UN sanctions upon the occupying power. As Key put it in his address to the United Nations: “It’s time for the Council to do its duty for those who have lost their lives and loved ones, and for the millions who have been displaced.”

New Zealand claims to enjoy a good relationship with both Israel and Palestine. Covering for Israel could certainly be seen as very friendly from the point of view of the Netanyahu regime but for the Palestinian people, ignoring the refugee catastrophe that Israel and the world thrust upon them must seem anything but friendly. As Key suddenly awakes to the plight of Middle East refugees and their flight to Europe he forgets those exiles who simply beg to return. UN Resolution 194 confirms that right but John Key and the National Party never call for its implementation. The universal right of return is binding under international law. The Universal Declaration of Human Rights (UDHR) was proclaimed by the United Nations in 1948 “as a common standard of achievement for all peoples and all nations” and one of the most basic of rights set out in the UDHR is the right of return. Article 13(b) of the UDHR which states: “Everyone has the right to leave any country, including his own, and to return to his country.” Palestinian refugees are entitled to this binding universal right.

John Key’s speech completely failed to recognise the fact that Palestinian refugees constitute the world’s largest refugee population although the Palestinian right of return has been reaffirmed by the United Nations General Assembly (UNGA) on more than 135 occasions. This expressed will of the international community has been consistently ignored by Security Council members.

“the refugees wishing to return to their homes and live at peace with their neighbours should be permitted to do so at the earliest practicable date, and that compensation should be paid for the property of those choosing not to return and for loss of or damage to property which, under principles of international law or in equity, should be made good by the governments or authorities responsible”.

Israel was admitted to membership of the United Nations on condition that it would accept and implement UN resolutions including, of course, UN Resolution 194.

“the problem of Palestine Arab refugees has arisen from the denial of their inalienable rights under the Charter of the United Nations and the Universal Declaration of Human Rights”.

“the inalienable right of the Palestinians to return to their homes and property from which they have been displaced and uprooted, and calls for their return.”

One of the main purposes for the foundation of the United Nations was:

“to establish conditions under which justice and respect for the obligations arising from treaties and other sources of international law can be maintained” and “to unite our strength to maintain international peace and security”.

Security Council domination of the United Nations and the power of the veto, quite rightly condemned by New Zealand’s Prime Minister, effectively disenfranchise nearly 75% of the world membership. This power to frustrate the will of the majority is exemplified in the insistence by world leaders upon the so-called Middle East ‘peace process’. These one-sided ‘negotiations’ between the defenceless Palestinians and the mighty Zionist nuclear power have achieved nothing but greater impunity for Israel to continue its territorial expansion and the creation of ever more colonial facts on the ground. In the past month alone, Israeli occupation forces destroyed 46 Palestinian homes and, for those living under Israeli military rule, even the refugee camps can offer no sanctuary.

A single state
Israel’s actions have resulted in the demise of the ‘two-state solution’ which, had it been implemented, would have been a betrayal of the Palestinian people. Israel has made it abundantly clear that the separated Palestinian enclaves that it might have permitted to constitute a Palestinian ‘state’ would never have been allowed a defence force or sovereignty over air space, borders or coastal waters. Under principles of international law and equity, UNGA Resolution 194 holds the key to reconciliation and peace “. . . refugees wishing to return to their homes and live at peace with their neighbours should be permitted to do so” and this should be facilitated by the governments or authorities responsible.

Logic and equity demand recognition of the fact that the territory which constitutes the combined areas of Israel/Palestine is too small for partition. The geological reality is evidence of the indivisibility of the land’s natural resources. The delicate nature of the ecological and cultural balance that has taken centuries to achieve demonstrates the danger to everybody of arbitrary interference. Ideologically-driven forceful discrimination is not only unjust but also sows the seeds of instability, nurturing bitterness and resentment. Zionism is the last remaining state-sponsored ideology of racial supremacy. It is an anachronism that belongs in the last century’s ‘age of the dictators’ (to borrow a phrase from Lenni Brenner). That is why Zionism does not represent all Jews. Unfortunately, people like Anna Baltzer, who has travelled and written extensively among the occupied Palestinian people and organisations, such as Jewish Voice for Peace, are ignored by the mainstream news media.

The son of an Israeli Army General, Miko Peled, has observed that:

“If there is one thing that is truly frightening it is an army of soldiers who really believe God is on their side. In Israel and in the West people like to believe that Israel is immune to that. Travel to Hebron, Kiryat Arba, Karmei Tsur and some of the other Jewish-zealot colonies in the West Bank. Walk around the Jewish Quarter in the Old City of Jerusalem and talk to the settlers who want to turn Silwan into the “City of David.” Talk to these people who see this as a zero sum game and think nothing of killing Palestinian children. The discussion of two states is numbing everyone. We need to act together for a secular democracy, equal rights and the protection for minorities.”

Peled’s perspective is that Israel actually created one state by “erasing the Green Line. So the only possibility now is to transform it from a Zionist state — like South Africa was transformed from being an apartheid state — and allow equal rights for everybody.” The tragically hard-won provisions of the Fourth Geneva Convention should serve as a beacon of enlightenment and universal responsibility. They offer the only civilised alternative to mindless anarchy and violence. Of course we should reform the UN and remove the power of veto but above all we should respect what has already been established and work to support it. That will take plain and honest debate that overrides “vested interests and historical alliances”. New Zealand has been party to policies that have disastrously failed the Middle East and to continue blindly along the same course is inexcusable.