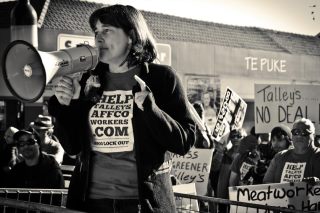 Helen Kelly has been a human rights crusader all her life. She is a hero in the Union movement and does more to stand for worker rights than most Governments ever have. Her battle against the constant war on workers waged by John Key and the National Government over the last 7 years has been tireless and her call for real safety legislation so workers can come home after a long day at work makes her a national treasure.

She has done more than most Union Presidents to reach out and engage and her activism to highlight how the Government watered down the recent health and safety laws demands respect.

News that she is fighting Cancer shook the activist world in NZ, but in the usual Helen Kelly style, she is taking a new battle in her stride and that battle is to demand change in NZs ridiculous cannabis laws…

“I’m actually going to write to Peter Dunne, who’s got permission to give me cannabis oil, and I’m going to ask him to do that,” Kelly told TV3’s The Nation on Saturday.

Having exhausted legal pain relief medicines, she was “brassed off” about having to go onto the black market for cannabis oil because “you don’t know what you’re getting”.

…we are almost alone now in the developed world to refuse to acknowledge the medical benefits of cannabis. Our denial at the harm cannabis prohibition creates borders on the delusional. Apart from criminalising people like Helen seeking pain relief via cannabis oil, we lock NZers up for pipes, bongs and cannabis for personal use like never before.

Let’s look at those numbers again…

The moral panic over so called stoner madness is keeping us in the dark ages, keeping good NZers in prison, allowing the Police enormous amounts of intrusive power over us as citizens, denying the Government taxation revenue, empowering organised crime and criminalising people like Helen Kelly.

It is time to end this nonsense, that Helen has the honesty and courage to tackle this while fighting cancer is just another reason why she is such a legend.