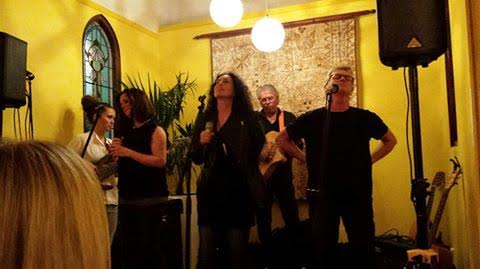 THERE WAS A PAINFUL IRONY about Monday night’s “Salon” at Ika Seafood Bar & Grill.  As Don McGlashan and Moana Maniapoto were raising their voices against the Trans-Pacific Partnership (TPP) its negotiators in Atlanta were bringing the deal home. Before the music started, there was only one topic of conversation: “Will they sign, or will the TPP negotiations, once again, be stalled – this time for good?”

One of the first people to arrive at the restaurant on Monday night (5/10/15) was Kim Dotcom and his rather subdued entourage. The big man deposited himself wearily at a window table and morosely interrogated his smartphone. His companions, fresh from the rigors of the Dotcom extradition hearing, looked equally exhausted.

Later in the week, Dotcom would admit in court that if he had possessed a crystal ball he would have held back the $4.5 million expended on the doomed campaign of the Internet-Mana alliance. His now severely depleted financial reserves, he lamented, were hampering his defence.

I observed the little group with a mixture of pity and incredulity. Pity, for Dotcom’s and his partners’ predicament. All that effort and expense on behalf of the US Government for … copyright violation!? Incredulity, that so much money could be spent on a political campaign … to so little effect!

Still, there was a silver lining to the Internet-Mana debacle. The Ika Seafood Bar & Grill. Had the Internet Party leader, Laila Harré, not crashed and burned last September, she would not now be the proprietor of the restaurant in which I was sitting, and a year of fascinating political “happenings” within its walls would not have ensued.

Looking around the room, it was clear that word of the success of these various “Salons” and “Table-Talks” had percolated through the Auckland progressive community. The lonely Dotcom group was soon joined by Dale Husband and his crew from E Tangata (the Maori-Pasifika website sponsored by the Tindall Foundation). Then First Union bosses, Robert Reid and Maxine Gay, came through the door. Professor of Economics, Tim Hazledine; Amnesty International’s, Miriam Pierard; broadcaster, Pam Corkery; AUT’s media expert, Dr Wayne Hope; and the former Human Rights Commissioner, Rosslyn Noonan, followed them in. The eatery was full-to-bursting.

Which was good news for Jane Kelsey, because this was a $100 per plate affair. The funds raised would defray some of the legal costs of the judicial review of Trade Minister Tim Groser’s refusal to release official TPP information, which Jane (and a host of others) have finally secured. Universally acknowledged as the leader of the Anti-TPP movement, the spirited law professor ducked and dived through the crowd with her characteristically bird-like energy.

And then came the music.

Don McGlashan is one of those extraordinary national treasures about which the nation itself is criminally ignorant. His professional career spans more than 30 years, during which he has composed some of this country’s finest songs. There is deep feeling and sharp intelligence in his music: gentleness allied with formidable strength.

Tonight he has matched at least some of his repertoire to the vital issues raised by the TPP. Make Your Own Mind Up, written for McGlashan’s daughter, Pearl, is a father’s plea for his child not to be taken in by her culture’s dominant myths.

They’ll try to make you believe in The Invisible Hand
The sweet self-interest of successful men
To believe in the chance, however remote
That the rising tide lifts all the boats

Envy of Angels was written for McGlashan’s father, a civic-minded civil engineer who taught his son that public works had to be built strong enough

To bear the weight

Of all the people

Who haven’t been born

Widely considered to be one of New Zealand’s most accomplished indigenous performers, Moana Maniapoto and her “Tribe” of – on the night – Cadzow Cossar (guitar), Marika Hodgson (bass), and Caroline (backing vocals) delivered an equally affecting performance.

Maniapoto has the ability to take a song from another culture and weave through it the essence of her own. In her hands, for example, the old union ballad Which Side are You On?, was effortlessly harnessed to the anti-TPP cause. In this example, and in much of the rest of her set, I couldn’t help feeling as if the audience was being wound-up tightly in a spell. Perhaps it was simply the superb musicianship of Cossar and Hodgson, and the amazing blending of Maniapoto’s and Caroline’s voices, but the sense of power growing and growing in the room was palpable.

As McGlashan joined Maniapoto and her tribe for one last song – a work in progress about the Treaty of Waitangi – I couldn’t help contemplating what a wondrous people New Zealanders are. So much talent exists in this country – too much of it unused, unwanted and unpaid – that if it was ever fully mobilised: if Art was to put on armour; then the world would stand astonished. Seeing those two superb entertainers, Moana and Don, singing about “our place” – the great meeting-house of Aotearoa – it occurred to me that nothing could withstand the coming together of progressive Pakeha and progressive Maori – not even the TPP.

Making my way home down Mt Eden Road, the words of the final verse of McGlashan’s Make Your Own Mind Up kept coming back to me: a sort of refrain about all that the evening had represented, and about all the work that now lies ahead, if this country is to remain “our place”:

They’ll try to make you believe in nothing
That nothing you do will amount to something
That the long, long lives of people like you and me
Never changed a thing, never made history

Aotearoa-New Zealand, you will have to make your own mind up about that.