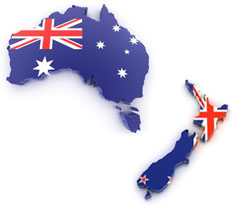 Australians who happened to be born in New Zealand are being rounded up, locked up in hard-core detention facilities, and marooned. What’s this about? What exactly is New Zealand’s relationship with Australia?

In short, New Zealand is Australia’s Ireland. Further, in British eyes, it always was.

Some history. New Zealand was called ‘New Zealand’ because of its discovery by Europeans in 1642 by employees of the Dutch East India Company (VOC); their captain was Abel Tasman. Australia had likewise been ‘discovered’ 36 years earlier, and had been named New Holland. There was a nice symmetry about this; most directors of the VOC were from Holland, with the remainder being from Zeeland. These were the early years of the Dutch United Provinces, one of Europe’s first ever republics.

In 1770 James Cook ‘discovered’ New Holland’s eastern coast. Initially named ‘New Wales’ by Cook, for reasons unknown this was revised to New South Wales. Before 1836, British-settled eastern Australia was generally known as New South Wales, and the remainder of Australia as New Holland. Then the colony of South Australia (never part of NSW) was proclaimed. New South Wales reached its greatest extent in the year 1840, when it incorporated New Zealand. In the 1850s, Victoria and Queensland broke away from New South Wales.

From Britain’s perspective, New Zealand as part of New South Wales was only a temporary expedient. Rather, the British thought of New Zealand as New Ireland, with Ireland being beyond Wales rather than of Wales; over a saline ‘ditch’. Unfortunately for the British there was already a New Ireland (in what is now known as the ‘Bismarck Archipelago’, and named in 1767 by a British sea-captain, Philip Carteret). Never mind, the British simply called our triple crown ‘New Ulster’, ‘New Munster’ and ‘New Leinster’; the ‘New Ireland’ was implicit. In the 1846 constitution some token realism took place. Stewart Island did not really compare with Greater Dublin. And Wellington was more connected with Nelson and Christchurch than with Auckland. So New Zealand was re-divided by the British into two New Irish provinces; New Ulster north of the Patea River mouth, New Munster south of that line.

The United Kingdom was formed as a union of England/Wales, Scotland and Ireland in 1801. The Union Jack is a blend of the crosses of St George (England), St Andrew (Scotland) and St Patrick (Ireland). Ireland was very much the subservient part of the Union, and was treated with much contempt by the English in particular, who saw the civilised world as being across the Channel to its southeast, not across its ditch to the northwest. Although much of industrial Britain was constructed with Irish labour, the Irish were always second-class citizens – really denizens – to English eyes.

Unlike the Irish, New Zealanders fortuitously averted their neighbour’s yoke after only 14 months of attachment, in 1841. The ‘troubles’ that occurred persistently between the Irish ‘home rulers’ and the English-dominated Westminster government were legendary, and will enter their penultimate phase soon if Britain votes to leave the European Union. (The final phase will be the resolution of the Northern Irish question in a post EU United Kingdom; or a post-EU England. Maybe Northern Ireland will be separated by a Hungarian-style fence erected by the Irish to close Ireland’s EU back door to England’s millions of resident denizens?)

New Zealand averted a second opportunity for Irish-style ‘troubles’ by not joining the Commonwealth of Australia in 1901. For 100 years, while Australia looked the other way (to its far northwest in the main, but also, from the 1950s, to its far northeast across the Pacific), we pretended to be a rivalrous sibling; equal though smaller. Australia, not able to govern us, simply ignored us. To Britain, New Zealand was literally eclipsed by Australia. To Britons, New Zealand exists ‘as if’ it was an Australian state. We reinforce this particularly English perception, by appearing through our symbols to be something like New Anglesey. To the British, Auckland since the 1950s has become the Holyhead rather than the Dublin of the south.

To Australia New Zealand became its Ireland in the late 1980s. (Or was it March 1946 when Australia played New Zealand at test cricket and contemptuously refused to play New Zealand again until 1974?) That was when gross national income (GNI, formerly GNP) per person in New Zealand fell by about 20% against that in Australia. Prior to that the two countries’ per capita incomes were close enough to the same. The legacy of Rogernomics, however, was to make the Tasman Sea crossing close to one-way traffic in labour; with a small offsetting flow of junior managers in Australia doing time in New Zealand to build their careers.

By 2001, New Zealand’s stereotyped role as Bondi crims and dole bludgers was well established. Air New Zealand bought the dying Ansett Airlines (because the Australian government had reneged on CER provisions to allow Air NZ to fly within Australia), and imported Australian managers. It was not clear who took over whom. When Ansett and its New Zealand parent became insolvent in September 2001, many Australians thought it was all New Zealand’s fault. The New Zealand Airforce had to rescue Helen Clark from Australia when her flight was picketed. “The Kiwi bashing generally has become very vicious,” Clark said. Earlier that year, Australia unilaterally disqualified New Zealand-born residents from rights to tertiary education support, and disqualified New Zealand-born participants in the ‘reserve army of labour’ from rights to unemployment benefits.

New Zealanders came to live and work in Australia as denizens, not as Anzacs; and were looked upon generically as the English looked upon the Irish. While I like Australia, and I like the Australians who know me, I also understand that Australia has become as much ‘another country’ as any other ‘other country’.

We are now seeing the full playing-out of this new ‘guest worker’ relationship. New Zealand-born Australians have become substantial victims of a process within Australia in which a clear divide is growing between denizen workers and citizens. The Saudi-isation of Australia.

New Zealand has to accept that it is not a much-loved bastard sibling of the former Australian colonies. Rather New Zealand is just another foreign nation dealing with an essentially xenophobic neighbour. We need to get used to this. It’s part of our journey towards actual independence within a world of Wilsonian nation states. (This ‘sovereign nation’ system may not be the best system of geopolitical organisation, but it’s nevertheless the system that became firmly entrenched last century, and is therefore what we accept as reality.)

New Zealand has to separate from its past attachments. Ireland has largely separated from its British attachments; generally for the better, despite the Eurozone crisis. While Britain may not be as ruthless today in deporting unwanted Irish-born Britons as Australia is at deporting unwanted New Zealand-born Australians, we accept that Australia sets its rules, and New Zealand should continue making other friends while learning to live with its neighbourhood bully. Australia is that bully, not Australians.