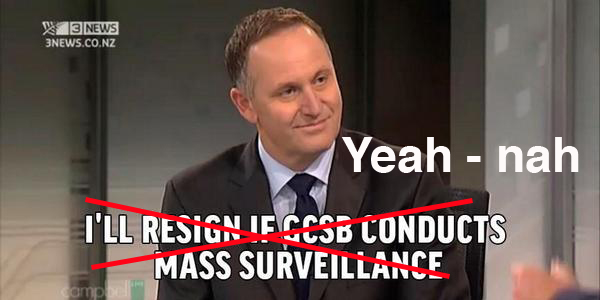 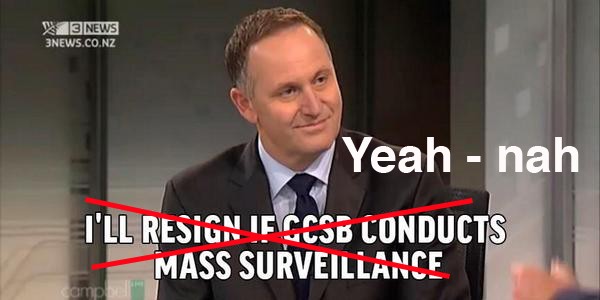 The powers that be probably could not believe their luck when NZers returned John Key to power in 2014. After all the mass surveillance lies, after all the revelations from Dirty Politics, after the public learned that the PMs Office had colluded with the SIS to smear Phil Goff before the 2011 election, the GCSB must have thought all their Christmas’s had come at once.

The vast increase in budgets, the incredible spying power given them by the NSA and the law change that allowed them to do it all legally was an avalanche of good fortune that they just couldn’t have manufactured if they had directly taken over the Government themselves.

The only problem to all this was the public. Beyond the most ardent National Party lovers, the public had deep suspicions about mass surveillance and if the democratic pendulum ever swung back the other way, their new found power might be curtailed. It has become increasingly important for the GCSB to con NZers into believing that they are protecting NZs interests rather than America’s.

That’s right folks, the GCSB isn’t a stooge for America and doesn’t feed all it’s info directly to the NSA for their own purposes, it’s really a giant cuddly anti-virus system that keeps your computer safe.

Was it Listener editor, Pamela Stirling, who came up with the idea? Or, did free-lance journalist, Rod Vaughan, pitch it to her? And was the deal clinched by the promise of access to all three chiefs? And whose idea was that? At some point, someone in the “intelligence community”, decided that a front page story about a “revolution” sweeping the corridors of Pipitea House would be just what the Director ordered. The question is: was that decision made in response to Rod Vaughan’s request for access? Or did someone make Rod an offer that he – and Pamela – couldn’t refuse?

Because a front-page story in the Listener, reassuring the Baby-Boomers that the SIS and GCSB are now being run by people just like themselves, was bound to prove very helpful – especially now. That’s because a Government-commissioned review of both agencies, led by Sir Michael Cullen and Dame Patsy Reddy, is about to start asking questions. A cynic might observe that Rod Vaughan’s article has very helpfully suggested most of the answers.

What is there to fear, after all, from an SIS staffed by scores of bright-eyed young university graduates determined to keep New Zealand safe from “extremist behaviours”? Or, a GCSB run by someone who understands the importance of reminding “the troops” to “remain focused on the job at hand and to remember their responsibilities to all New Zealanders.”

…if the GCSB really want to con the sleepy hobbits of muddle NZ, they should suggest overseas criminals are trying to hack their property valuations. Watch the howls of ‘something must be done’ then.

The ease with which the GCSB has managed to con us that they aren’t really a mass surveillance franchise for the NSA is as extraordinary as NZers desire to re-elect Key after they were told how corrupt his Government had become.