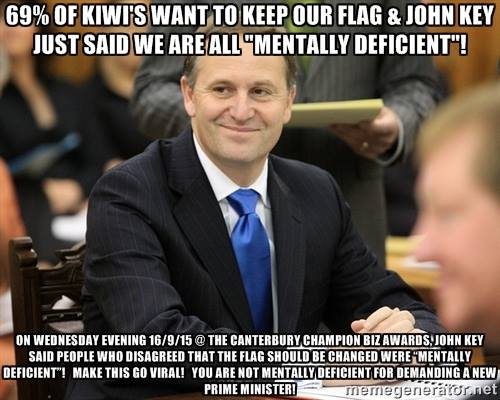 There’s speculation that John Key told a Canterbury business audience that people who thought the flag shouldn’t be changed were ‘mentally deficient’.

…it’s just such a disgraceful thing for anyone – let along the Prime Minister of our country to say, that I feel like I have to give him the benefit of the doubt.

If this is confirmed, it’s just grossly offensive for the Leader of our country to stoop to this sort of childish name calling. In the past he’s described Journalists he didn’t like as ‘henchmen’ or ‘Communist Conspiracy theorists’ and he is alleged to have called one of the mothers of the Pike River tragedy an incredibly offensive word in a  conversation with Slater.

The media really need to focus some attention on this allegation.

It could be a hoax or a misrepresentation of what the PM said, but a definitive answer would be good.