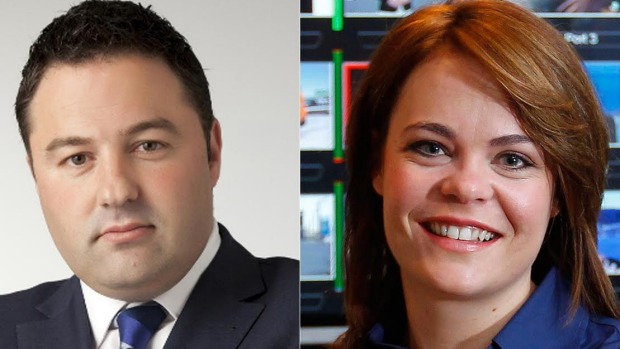 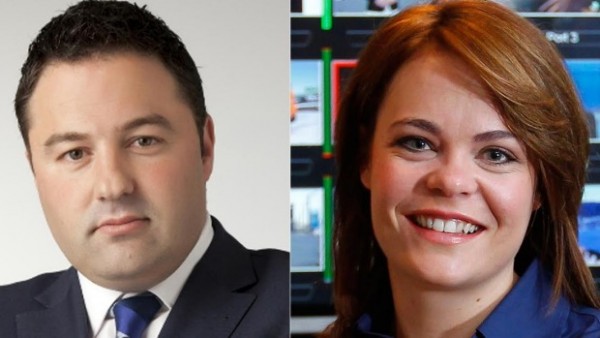 ‘That’s interesting’ says Garner beginning the hype and a pattern of over-familiar interjections.
They are like a pair of forced smiles, like a Christian couple of graspers.  Like an infomercial couple selling widgets to muppets.
‘I’ve taken…’ It’s all about him.  What he’s taken is a lot of pies, you can tell in the voice. Always sounds like he’s got half a mince and cheese in the throat when he’s talking – but not as bad as Steve Hanson.
He asks the first of many rhetorical questions.
False laughs punctuate the ordeal.
He giggles. A self satisfied chuckle. For Christsake you fkn man child.
How embarrassing is this to watch on TV? What a small mercy to only have to cringe my way through it on the Radio Live simulcast without the Gawdawful visuals.
She gets to ask a rhetorical question this time.
Another one.
‘You think they will?’
‘Yeah I think they will.’  Did she just answer her own question? Ugh man! [Afrikaans]
Why engage vigourously using ‘you’ if she is going to then presume to know what ‘you’ think? That is simply disrespectful at close quarters like this, in the intimacy of our homes, it’s also condescending.
And the little parrot that speaks truth hopped up and squawked: ‘shut the yapping yarpie up.’
She’s making Garner look human.  You must do this, you must do that – how typically Afrikaaner.  Oh, Garner you poor bugger, but you deserve it for being an overhyped phoney, so suck it up.
Who cares about whatever she’s going on about, really, there is no attraction here.  What is her purpose?
300 years hard out exploiting Africa and using the Africans as their slaves and now the white overlords have fled here, how charming.  Would the NZ government and the Pakeha populace have as freely accepted a hundred thousand Rwandans – including untold hundreds of war criminals amongst them – in the same way they have freely accepted the white South Africans? Chances of a black Rwandan woman co-hosting this show? ‘Fk off back to Africa, then you can off back to Europe – squawked the parrot.  I told the bird not to be racist, and pointed to the Human Rights charter on the wall, but it doesn’t listen – it says it’s the truth.  And it’s a talking bird, so you’ve got to listen to it.
Thumping dance music begins, plays underneath. I’m listening on the wireless so the piece must have begun.
Awful dance music at some cheesy club drones on underneath the narration.  Cue Sky Tower pan shots and Auckland urban montage I’m guessing.  To me on audio only it’s grating and conveys no information, but I’m guessing it’s the same with pictures.
Cha Ching noises whenever reporter mentions money.  Tres classy.
About rates or something, Auckland Council.  How fkn dull: a wanky Auckland story that it so far up its own arse it’s tooting its own horn.  This is why the rest of the country hate Auckland – deservedly so.
Talk to Bill Ralston. Ah Billy.
Reporter: ‘You’ this and ‘your’ that, setting up ‘them’ and ‘their’ as some conflict.  So clunky.  So dorky whoever it is.
Ralston reveals he’s going to run for Council next year.
So big ad for Billy.  That’s all it was.
Unbelievable.  Does he have to declare the value of this prime time advertorial in his candidates return? He really should.

Back to the twattling duo.

HDPA actually answers one of his rhetorical questions. Just stop it! FFS!
Garner: ‘Am I right?’
HDPA: ‘We’ll move on.’

Fkn move on then.  Really losing patience now. It’s becoming a chore having to endure this programme.

New home.
Lachlan Forsyth has dreamy ambient music and I haven’t noticed its started. Shows how effective garish jarring music is, sadly.  Lachlan’s a nice guy, but so dry.
Superannuation/numbers/money. Christ on his bike, what was that all about? Numbers don’t translate well at all to radio and I bet on screen only slightly better.  There’s no emotion with numbers and future money etc that is why it doesnt work, it doesnt connect, theres no feeling, it is so dull, so very, dull, so, z, zz, z, zzz, zzzzzzzzz Wa. – oh, it’s over.
HDPA tries to crack a joke, more fake tittering from her. Please stop. Asablief halten – or whatever it is in Afrikaans. They are trying about ten fold more than they should be, or another way of expressing it is they are only 10% cool.  Even Hosko and whoever aren’t that awkward together.
Red peak, red peak. ( said like red rum, red rum) It’s a cheerleading chant I’ve well heard enough of.  Gareth Morgan paying for all this is he?
Garner: ‘I feel…  Give it a chance.’
I feel, fk off.  Generating hype is all Garner does and he does it with a leaden hand.
HDPA: ‘We were pretty happy.’
We – who the fk is we?
Fancy a show taking an editorial stance on something like that, like a team thing – idiotic.
John Key on and he’s saying maybe if Labour does – like a dare.  It’s such a play by Key – he’s a wily punter and he’s betting on a new flag using every trick.
HDPA: ‘You’re politicising the flag debate…. !’
Does she know how stupid that sounds?  It’s precisely, word for word, what John Key tells those he underestimates, some verbal shit spittle for the plebs.  She’s lapping it up. A lapping yapping yuppie yarpie. KOF already.  It’s not your flag to change, coloniser.
Ads.  Thank fkn Christ!  Never thought I’d be so glad to hear the ads.  A relief.
Garner: Here’s a question: ….
Fk off with these moron questions.
‘He wasn’t born here. We nearly deported him.’
‘Someone deport her.’ screeched the bird.  I asked the parrot what continent it was from.  Silence – fkn hypocritical parrot.
’24 years in community’ this man from Tuvalu. Boxer. Olympic hopeful. Boxing sounds, I guess they’re sparring.
4 years ago, hid from police. A mix up with his paperwork. An overstayer. Paperwork fixed.
Right, well so what?  The whole thing hinged on a bit of paperwork – what an anticlimax.

Garner: ‘wouldn’t get in the ring with him.’

HDPA: ‘ever.’
She has to have the last word, finish the sentence off.  Every fkn time.  What a particularly detestable trait.  So awful.
Hype for upcoming bullshit on Garner overcoming his personal fear of heights. God, what an indulgence.  No one cares but him. Why? Apropos of what?  Manufacture some drama.  Pathetic.  What about volunteer for some water boarding or something where he gets properly hurt, you know, something the parrot would appreciate.
Ads
Garner: ‘I’ve hated heights, I’ve always… I’ve had a childhood…’ Yeah, well I’m hating you hating heights so let’s call it even and do a real story instead.  He has established no compelling reason why we should watch this or why he’s showing it.  Like the vanity of the flag so the vanity of a personal challenge appeals to the producers.
‘It’s quite a challenge eh?’ eh what? No – we still don’t care.
On radio it’s just these bleeping sounds where he’s swearing 4 sheets to all fkery.
‘Its such a bloody leveller this’. Ah, how? Leveller how?
‘You shit yourself, an I’ve overcome…’
HDPA: ‘Have you learnt a lesson?’
‘I was scared, I was shaking… I was moving around, I I I …’
I, I, I, me, me, me… and I, I, I, don’t care.  I can get no sense of height from the radio so I cant recognise the peril and even then I just don’t think I would care.  There was no lesson, there was no point – Garner had answered that in the negative by way of his babbling.
HDPA: do you know how to dance?
You want us to dance for you?  I had the strength of character to listen through this shit programme and now this barking velt hyena wants us to fkn dance for her too.  Is she deliberately trying to wind up the parrot?
‘Make the kaffirs dance, make the kaffirs dance’ said the parrot. At this point I had stopped remonstrating with the parrot, I just let it go on.

‘Master Chef is on next.’

And it’s suddenly over.
No getting that half hour back.  Truly one of the most disagreeable tasks this reviewer has had to endure.  Let this be my first and last word on this show.
End of Story.