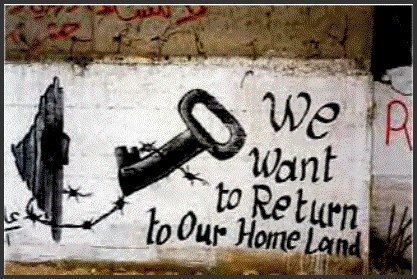 With growing world-wide awareness of the humanitarian tragedy that the creation of refugees inevitably causes, it is timely to remember the plight of Palestinian refugees – the largest group of displaced people in the world, whose suffering has lasted longer than that of any in modern history. Nearly athird of Palestinian refugees live in camps, from Syria to Jordan and Lebanon, as well as the West Bank and East Jerusalem (also in the West Bank), and theGaza Strip. In 2007, the Badil Resource Centre for Residency and Refugee Rights numbered Palestinian refugees at 7.6 million, 4.6 million of whom are UN-registered. UNGA Resolution 194 states unequivocally that Israel has the duty to repatriate those “displaced by the recent conflict” with compensation for their losses. These are the people and their descendants who fled, or were forced to leave by Israeli forces, with the establishment of Israel in Palestine in 1948.

Israel was admitted to UN membership on condition that it accept and implement UN resolutions, including Resolution 194. The right of Palestinian return has been reasserted by the UN at more than 135 sessions. Because Israel refuses to abide by international law, Western allies have supported a so-called peace process that seeks to accommodate the aims of Israel’s founding ideology by undermining the right of Palestinian return. As Palestinian writer Ghada Karmi reminds us: “The right of return is an individual right, and no one except the refugees themselves can negotiate it away.” As the World Bank has noted, “as long as significant portions of a society’s population are displaced, the conflict has not ended. There can be no hope of normalcy until the majority of those displaced are able to reintegrate themselves into their societies.” Beyond Resolution 194, Mark LeVine, professor of Middle Eastern History at the University of California, points to two other UNGA resolutions that counter efforts to deny Palestinian human rights: “General Assembly (UNGA) Resolution 2535, passed in 1969, recognises that:

“the problem of Palestine Arab refugees has arisen from the denial of their inalienable rights under the Charter of the United Nations and the Universal Declaration of Human Rights.”

“the inalienable right of the Palestinians to return to their homes and property from which they have been displaced and uprooted, and calls for their return.”

The blockade of Gaza is yet another humanitarian crisis, imposed upon a people, of whom more than half are also refugees. While Israel mercilessly enforces its blockade within and around the tiny enclave, there is no possibility of escape for the terrorised population. Meanwhile, the world community is failing in its duty to hold Israel accountable. The Zionist state possesses ample means to rebuild the thousands of homes it has destroyed, and our leaders should require Israel to make appropriate reparations by restoring Gaza’swater supply and economic infrastructure.

History of Western interference in Middle East affairs
From the time of the Balfour Declaration and the Sykes Picot-agreement to the present day, Western meddling and aggression has resulted in ever-growinginstability in the region. The US, which had supported the despotic Shah of Iran, later allied itself with Saddam Hussein in Iraq’s war against Iran in the 1980s. The US supplied the Iraqi leader with Intelligence that assisted in identifying Iranian positions that the US knew, only too well, would be targeted with chemical weapons. The US even blockedIranian attempts to bring their case against Iraq to the United Nations but when Saddam Hussein fell from favour, the US (supported by the UK, Australia and Poland) invaded Iraq, with devastating results. The allied justification for the invasion, which was based on lies, sundered Iraqi society and ruined the economy. The Islamic State of Iraq and the Levant (ISIL) now controls the population centres that were bombed and occupied by the US. The traumatised Iraqi people, who suffered under occupation and under the regime, supported by sectarian militias thatthe US helped to establish, now have to cope with living under ISIL.

The US Defense Intelligence Agency (DIA) report
A federal lawsuit brought by the conservative watchdog organisation Judicial Watch, has forced the release of a revealing selection of formerly-classified Defence Intelligence Agency documents obtained from the US Department of Defense and the State Department. One aspect of the report is discussed in aFox News video interview. The interview focuses on the White House’s handling of the Benghazi Consulate attack but far more damaging information emerges from one of the Defense Intelligence Agency documents circulated in 2012: that an “Islamic State” is desired in Eastern Syria to effect the West’spolicies. The investigative journalist, Nafeez Ahmed, tells how the hithertosecret Pentagon document showed, three years ago, that the US-led coalition not only knew of but also welcomed, the emergence of an extremist “Salafist Principality” in the region as a way to undermine the Syrian leader, Bashar al-Assad.

The document identifies the “supporting powers” in this strategy as “the West, Gulf countries, and Turkey.” Charles Shoebridge, a former British Army and Metropolitan Police counter-terrorism Intelligence officer, said of the documents that they contain:

“. . . revelations that raise vitally important questions of the West’s governments and media in their support of Syria’s rebellion.”

Nafeez Ahmed‘s article refers to a US Army-commissioned RAND Corp report,published four years before the DIA document, calling for the US to:

“capitalise on the Shia-Sunni conflict by taking the side of the conservative Sunni regimes in a decisive fashion and working with them against all Shiite empowerment movements in the Muslim world.”

The truth is, the West knew very well that Islamist militants were at the centreof the religious insurgency in Syria. That Western policies are inspired by corporate agendas, not least those of the burgeoning arms industry, should be self-evident. It is also clear that Western ‘interests’ certainly do not include the well-being of the people of the Middle East. As Annie Machon, a former MI5 Intelligence Officer who blew the whistle in the 1990s on MI6 funding of al-Qaeda‘s assassination of Libya’s former leader Colonel Gaddafi, concludedthat supporting the very same Libyan groups, resulted in:

“a failed state, mass murder, displacement and anarchy. So the idea that elements of the American military-security complex have enabled the development of ISIS after their failed attempt to get NATO to once again ‘intervene’ is part of an established pattern. And they remain indifferent to the sheer scale of human suffering that is unleashed as a result of such game-playing.”

Zionist ideology
Ever since the imposition of the state of Israel (now nuclear-armed) upon the people of the region, the Zionist project has been responsible for untold suffering, both among the people whose land it expropriated and those who live in the wider neighbourhood. The Israeli whistleblower, Mordechai Vanunu, who courageously served 18 years of imprisonment for informing the world, in 1986, about Israel’s furtive introduction of nuclear weapons to the Middle East, has recently been put under house arrest for daring to give an interview to local news media. Israel’s fear of free speech is understandable but inexcusable. As Vanunu’s attorney, Avigdor Feldman, has pointed out, anything Vanunu might say on the subject cannot possibly present a threat to Israel’s national security. Feldman noted that the ban on speaking with foreigners without the security service’s permission “would surely be acceptable in North Korea, but not in a country that defines itself as the only democracy in the Middle East.” Vanunu had planned to visit London, both to attend a three-day conference sponsored by Amnesty International and toaddress the British Parliament. Silencing Vanunu only adds to the mounting record of Israeli repression of both its own citizens and those it condemns to live under military occupation and blockade.

The Israeli economy and armed forces profit immensely from the repression of the Palestinian people. Israel proudly attributes the success of its weapons and war technology exports to their being ‘combat proven’ in Gaza and the West Bank. An Israeli journalist and film-maker, Yotam Feldman, released a documentary film in 2013 called The Lab. The film illustrates the use to which Israel puts its total control of Palestinian territories in order to test its weaponry. The profitability is attested to in a revealing interview in an Israeli newspaperwith Eli Gold, CEO of Israeli arms company Meprolight.

New Zealand’s leaders have a choice
At present the New Zealand Government refuses to call for sanctions against Israel which might encourage the Zionist state to abide by and respect international law. Our leaders prefer to cling to the illusion that Israel would be prepared to give up its profitable abuses of the Palestinian people solely as a result of direct ‘negotiations’ with its defenceless victims. This view is part of the mind-set that puts our government’s devotion to membership of ‘the Club‘ahead of all other consideration. Never mind that it has been ‘the Club’ ofWestern allies that has, ever since the First World War, cynically exploited and manipulated the people of the Middle East while posing as their saviours. Western intervention has hindered the development of progressive movements in the Middle East that could have assisted in the building of rational, secular and modern societies. The US and its allies have consistently backed oppressive regimes and corporate-friendly dictatorships. So manypeople whose humanity and intelligence could have brought sanity and reason into the everyday affairs of the Middle East have been either exiled, murdered or lie forgotten in prisons.

The world is changing fast, through the internet people are speaking to each other, discovering and sharing realities that the corporate news media and many of our politicians would rather not discuss. The refugee crisis in the Middle East will end only when our leaders learn to respect the people of the region with policies based firmly upon the requirements of international law, particularly the Fourth Geneva Convention. Will our leaders ever have the courage to step outside of ‘the Club’ and, like Mordechai Vanunu, speak truth to power? New Zealand has a voice at the Security Council, for goodness sake and we must speak up. To remain silent would be unconscionable.