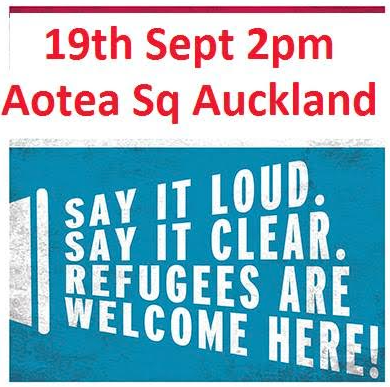 I can’t share that picture of the drowned toddler on the beach of Fortress Europe. He was the age of my daughter Aoibheann.  But things need to change.  The boy’s name was Aylan. He was 3, and came from Kobani.  Kobani, where the socialist and feminist grassrtoots resistance to ISIS is now attacked on the other side by the Western ally, Turkey.

I’m an Irishman who moved here from the North of Ireland first in 1999.  Our hometown Dundalk took a huge amount of refugees from the Loyalist pogroms in the North of Ireland in the early 1970s. It was the biggest movement of displaced people internally in Europe from the end of World War Two, until the fall of Yugoslavia. We grew up in a town of solidarity, where thousands of people fled for their lives from burning houses and deathsquads, from a regime that shot civil rights protesters dead on the streets. We did it then, we can do it now.

Some of these people who talk about “looking after our own”, I’ve never seen marching against privatisation or the TPPA, or on the picket lines with striking low paid workers fighting zero hours contracts , or putting their bodies in front of trucks stealing state houses in Glen Innes, or supporting Maori and their struggle for Tino rangatiratanga and sovereignty. As we used to chant against the Nazis in Europe –
“Unemployment and inflation, are not caused by immigration – bullshit! Come off it! The enemy is profit. ”

Double the quota is still pathetic. The racist Australian government of Tony Abbot says it will take in 12,000 refugees. New Zealand – let’s welcome Ten Thousand refugees now and do our part to help the oppressed and suffering masses. 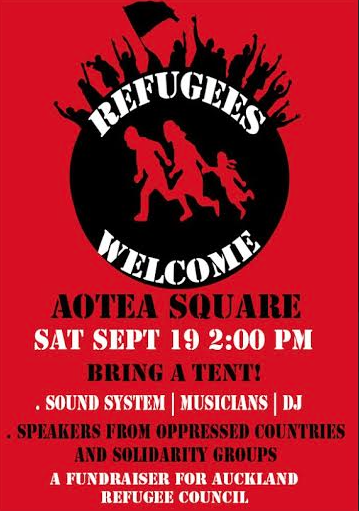 Sound systems in the centre with musicians, djs, and speakers from oppressed countries and solidarity groups, at the centre of a circle of tents forming a global village or a refugee camp.

Refugees are welcome here. A fundraiser for Auckland Refugee Council.