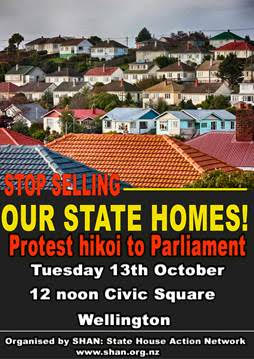 The loudest cheers at any National Party conference come when a government minister announces another attack on social welfare recipients.

It was Paula Bennett’s turn to throw some red meat to National’s blue-rinse bludgers this year with another populist attack on state house tenants.

Such is the loathing National has for state house tenants that Bill English is comfortable saying the government is not a good landlord – one of the justifications he offers for the whole sale selloff of state housing.

English is right that Housing New Zealand is not a good landlord and it’s easy to see why. HNZ has been stripped down so far that HNZ managers now manage 350 houses each – three times as many per manager as in the private sector.

I’ve come across many horror stories about HNZ and the cowboy contractors who maintain their homes. Here is one I received just this week:

“Hired cowboys is another major issue is. Many of these contractors have no respect for tenants or their homes either.
2 years ago I moved into my home which had had some repairs and maintenance done. The work was shocking.
New carpet (in some areas, not all) with holes through it – one as big as 10cm diameter. The carpet was also laid sloppy and crooked.
Paint and glue and sealant spilt everywhere, over carpets, walls, tiles, bath and basins all left to set hard. Still remains today.
The previous tenants had several floods, most of the door frames, wash house cupboards etc are rotten.
Brand new oven also faulty and remains faulty today.
When the lovely auditor came through soon after I moved in to inspect everything he noted down all the faults, also writing off our kitchen with 75% damage.
The house was also riddled in cockroaches, both wood and German species. And fleas.
There was a make shift compost out the back that was 2 metres high in household rubbish. (And heaven knows how many feet deep…).
Over the last 2 years we have been creating gardens. Everywhere we dig we are pulling up bags and bags full of household rubbish. Obviously the previous tenants were burying it everywhere they could. Not only rubbish, but we also digging up used needles and syringes
After 14 months and several phone calls a couple of men came and finally cleared the compost rubbish. They were also instructed to dig one foot down and a meter out surrounding it. Unfortunately I was not there to supervise, after they left I noticed they hadn’t done so and laid a thin layer of potting mix over the ground. So there is still buried rubbish in that area.
All this was brought to the attention of the housing manager on her first welcome visit. I also encouraged her to get hold of the oven supplier and utilise the warranty – being brand new and all.
She was also supposed to have got hold of the carpet layers to have them come back and redo their shoddy job, but nothing!
After months and months of waiting for the insect infestation to be treated I gave up and treated it myself at my own expense. I see the odd baby German Cochroach and still bring this to their attention, to be told I should have told them within the first 3 months of moving in…grrrr I reiterated I had done so several times of course, but now that doesn’t count.
The lino in the house – and there’s lots of it – is worn and old and some areas have slashes through it.
The door handles keep breaking and who ever repaired them previously, must have used pva glue and screwed them all in crooked.
It is disgusting to watch and see how far both contractors and many HNZ staff exploit their very own.
Our rotten doorways, cupboards and kitchen have never been addressed to this day.

To top this off there are other concerns…
HNZ without my knowledge last year put my rent up to market rent although I haven’t been working full time, then when I went on ACC they took $600 off me without my knowledge, and the following week about half of this.
It put me into deep hardship as they stole my ACC income on 2 occasions…

This is not exceptional – this is typical of the treatment HNZ tenants get at the hands of John Key’s government. To them HNZ is a cash cow from which they take $80 million in dividends each year.

State house tenants are fighting back – join them in next month’s protest.