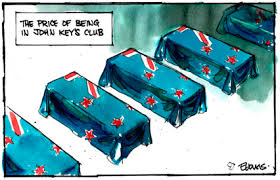 The decision to send New Zealand’s troops to join the fight against ISIS was justified by our Prime Minister as “the price of the club”.

The club, of course, is headed by New Zealand’s ally, the US, a country for which John Key has an abundance of open affection.

At a recent American Chamber of Commerce awards, John Key, boasted about his close links with America by saying:

“We own a house in America. I’ve worked my entire career for a couple of US banks – Bankers Trust and Merrill Lynch. I kind of love everything American – sports, food, golf courses, there’s nothing I don’t like.”

There are, of course, plenty of things not to like about the United States; things like racism, violence, poverty, gun culture, greed, etc. but it is unlikely that any of these things would ever get in the way of John Key’s enjoyment of America because the American system is designed to shield their rich and hide their poor.

Don’t get me wrong, I have no problem with Mr Key holidaying where he chooses to, or spend his money however he wants; but I do have a problem with Mr. Key’s political and moral stance that accepts our position in the world as our masters’ followers, not independent leaders.

The notion that New Zealand has no choice but to pay “the price of the club” was famously rebutted in the debating chamber of the Oxford Union in 1985.

“To compel an ally to accept nuclear weapons against the wishes of that ally, is to take the moral position of totalitarianism which allows for no self determination which is exactly the evil we are supposed to be fighting against”.

30 years on, we have lost our moral basis for our foreign policy. We happily go where our allies lead without closely examining whether our decisions serve our interests and that of our world community.

ISIS and other extremist Islamist groups in the Middle East were created by the West and their regional allies. The historical meddling of external forces in the Middle East and their association with tyrannical, suppressive regimes have provided ISIS with a strong political platform from which to distort the Islamic call to jihad.

New Zealand involvement in the Middle East has only strengthened that platform by proving to the Islamists that their enemies are fighting ISIS only to maintain their geopolitical interests. The decision to join the war in the Middle East was carried out without a single vote being cast in our Parliament.

We should have learnt from our past history and our willingness to blindly serve the interests of imperial powers. A great many of our young men died in the needless WWI because, the people in whose hands their fate were trusted, failed to protect them. But instead of remembering them by mourning their wasted lives, we glorify war and militarism through expensive pageantry.

We send our troops to the Middle East to fight ISIS but at the same time make visits to, and encourage trade negotiations with Saudi Arabia; a country with  known links to terrorism that has beheaded more people than ISIS have. Where is the moral justification for that?

And where is the moral justification for not allowing New Zealand’s citizens and their parliamentary representatives to examine the text of one of the biggest free trade deals proposed in the world? Surely, we should be allowed to see what is already disclosed to New Zealand’s negotiating partners.

The Trade Minister, Tim Groser, says that the people who insist on seeing the text of the TPPA (the Trans Pacific Partnership Agreement) are the ones who want to derail the negotiations. Even if that was true, which of course it is not, surely the Government’s position is robust enough to enable it to be fully defended. And if it is not, then there is more reason for us to remain watchful and concerned.

New Zealand’s moral ambiguity extends to other areas too. The decision to spy on other nations on behalf of our allies, our low emission reduction targets despite the looming environmental disaster, the reluctance to take on more refugees at the time of a great global refugee crisis, our disturbingly high domestic violence statistics, increasing racism, and the fact that 300,000 of our Kiwi children live in poverty, all point to a nation who has lost its moral compass.

Yes, we cannot wave a magic wand to quickly make our world a better place for everyone to live in but if we put morality before greed, empathy before power, we can make a difference. It is important that we do not let our collective complicity to rob us of our democratic rights and blind us to the suffering of others. We need to let ourselves be led and guided by our morality and compassion, not the trashy American values of consumption and vanity.

Donna Miles is a British-born, Iranian-bred, New Zealand citizen with a strong interest in human rights, justice and equality issues.