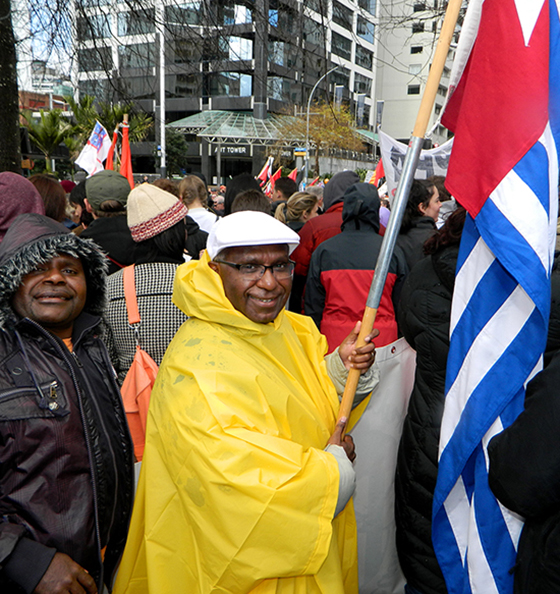 WHILE New Zealand protesters were giving an emphatic thumbs down to the proposed Trans-Pacific Partnership corporate slap in the face of democracy at the weekend, a quietly spoken West Papuan in a yellow raincoat was offering solidarity at the Auckland march.

Octo Mote, a former journalist and now secretary-general of the United Liberation Front of West Papua, was in town to spread the good news of West Papuan strategic self-determination developments to activists and supporters.

He spoke at a packed public meeting in the Peace Place on Friday night less than 24 hours after talking to students at the University of the South Pacific in Fiji before taking part in the anti-TPP/TPPA rally.

Rally organiser Barry Coates introduced Mote to the crowd outside the US Consulate-General.

Apart from welcoming Vanuatu’s initiative to press for a United Nations special envoy on West Papua, and the Solomon Islands decision to appoint a special envoy, Mote was positively upbeat about the upsurge in Pacific regional support for the West Papuan human rights cause.

As usual Australia and New Zealand are dragging the chain.

Mote also had a message about the impending release of jailed West Papuan activist Filep Karma – who is due to be freed today on Indonesia’s Independence Day national holiday, marking 17 August 1945 when the Indonesian nationalists issued a proclamation of sovereignty and began armed resistance to overthrow Dutch colonial rule.

Karma was jailed in 2004 for 15 years for raising the Morning Star flag, the outlawed symbol of Papuan independence. But he is defiant about the plan to free him from Abepura prison in Jayapura.

He is only interested in an unconditional release so that he can resume campaigning for West Papuan self-determination.

In a statement released through activist circles and cited by Tabloid Jubi, he declared:

“I did not commit any crime when I raised the Morning Star flag in 2004.

“I will keep campaigning for independence once I am free.”