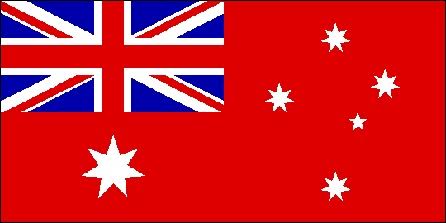 Does anyone recognise this flag?

It’s in fact the “people’s flag of Australia”, the flag under which Australian soldiers fought in both World Wars. See A Brief History of Australian Flags. The field was “red for civil use”, as in the pre-1965 Canadian flag.

There was no such thing as an Anzac flag. And there are very few historical depictions of Australian and New Zealand flags being flown together. This is the flag Australian soldiers fought under at Gallipoli, although it’s not overlooking Anzac Cove as its caption states. (It’s Suvla Bay in the distance.)

My search for the two correct flags together yielded this Gallipoli centenary party; these people in the Brisbane Paramount Rifle Club are unlikely to be politically ‘red’. Yet the red ensign “people’s flag” of Australia was dismissed as the Australian flag in 1953, in a fit of Cold War pique. And probably without a moment’s thought by the Australian government, the half-century of Australia and New Zealand flying quite distinct flags came to an end. The era of New Zealand’s flag being taken for the Australian flag had begun. Few of us alive today have any memory of the two flags being much different.

Robert Menzies wrote in 1967: “In the year of my birth 1894 – Queen Victoria was on the throne of the United Kingdom and Ireland and the Dominions and Colonies beyond the Seas… For us, the maps of the world were patterned with great areas of red, at a time when red was a respectable colour”.

Australia, like New Zealand, has its anti-change brigade, and the standard argument trotted out is that the soldiers “fought and died” under the present blue flag. And history was rewritten (literally ‘recoloured’) to support this myth. All New Zealanders (and Australians) should look at The Australian Red Ensign: Myths and Facts. The first picture shown is a black and white photo from New Guinea in 1943. The image of the flag, when later used on a book cover, is painted blue. Soldiers who were there confirm that it was red.

At the flag-waving at the opening of the Australian Federal Parliament in 1927, the blue flag is nowhere to be seen, just the Australian Flag (red) and the Union Jack. Among the many illustrations on this website, is a 1943 Allies Day toffee insignia. 13 allied flags are shown, with the Australian (red) and British flags taking pride of place. There is no New Zealand flag to be seen. So much for Anzac collegiality. A 1917 book “The Story of the Anzacs” shows a soldier standing in front of a big red flag. This may be why some New Zealanders have thought that this was a concocted Anzac flag. (See this entry – Kia Ora Katoa – in the New Zealand National Library. The flag that is called the Australian Flag is actually meant to be the New Zealand flag – it lacks the Commonwealth Star. The labels such as ‘Suvla Bay’ are not flag labels, just Gallipoli venues. It was the British who landed at Suvla Bay.)

Does this re-acquaintance with historical fact inform the New Zealand flag debate?

Yes it does, because a flag is a statement to the rest of the world where a person (or ship) is from. We were embarrassed before 1840 through not having such a symbol. We were embarrassed again at the time of the South African War in 1899-1900, and we have been embarrassed for the last 60 years, when Australia adopted a flag that looks to the rest of the world like our flag. The second overriding issue is that we need to signal that we are an independent country. The concept of nationality remains fuzzy, despite the best efforts of Woodrow Wilson nearly a century ago. New Zealand’s nationality was very ambivalent during the early 1920s, when Prime Minister Massey refused to accept that we were anything but a province of Greater Britain. New Zealand citizenship dates from 1947. Our nationality remains ambivalent through our having a foreign head of state, and through the office of Governor General. I’m happy for these ambivalences to remain. Nevertheless we are no longer British, and many of us never really were. Our calling card should not have the United Kingdom on its letterhead.

We need a people’s flag; a flag that neither conveys one’s politics nor one’s snobbishness. (Even in Australia, the old red people’s flag, had it been retained, would be in need of an alternative symbol to the Union Jack.)

A good flag is a simple flag, but not necessarily as simple as Japan’s rising sun or Canada’s maple Leaf. The present flag has two symbols and three colours. That should be regarded as a maximum for a new New Zealand flag. Further, one of those colours has to be red, to symbolise Māori. I would argue strongly that the flag should have no black in it. Black is one symbol of New Zealand; but it also symbolises piracy, death and the Islamic State.

Red and white alone cannot represent New Zealand. The only viable third colours are blue or green. I have seen no designs with just red, white and green, so that leaves blue, giving us the present three colours.

Do we need stars as a symbol? I think ‘yes’. The Southern Cross is the symbol that places us in the south like no other, and symbolises New Zealand more than any other southern hemisphere country. (In all except the far north of New Zealand, the cross is visible all year round, clear as stars can be on any fine night in the South Island. This is not true of other southern nations.) In winter, this striking constellation is a beacon at or near the zenith of our sky, and a reliable pointer to ‘true south’. (As an aside, ‘Matariki’ is a northern hemisphere star cluster, in the constellation of Taurus. It’s visible in the north in our summer. It’s more visible as Subaru, the Japanese name for that same group of stars that are prominent in its winter sky.)

I like the fern as a second symbol. It’s the one that most identifies us to others. (Too many koru designs look like a Japanese representation of a tsunami. Land of the great white wave. Though I do like the ‘Koru and Stars’ by Alan Tran) Some people think the fern looks like a feather. Maybe; it’s not a problem, though. While a feather may be seen by some as a symbol of cowardice, I think we’ve put the World War 1 ‘white feather’ women behind us. The white feather is also a symbol of peace, possibly appropriated as such by Taranaki Māori from the Chatham Islands’ Moriori. It’s also an emblem of chieftainship, as in this 1840s’ painting of Te Rauparaha. I would be surprised if the author of the Kamate haka was ever thought of as a coward.

I like the white fern in place of the Union Jack. The flag is instantly recognisable as of Aotearoa New Zealand and nowhere else. The flag is acceptable to conservatives because it retains the general colour scheme of the present flag. It has the potential to do for New Zealand what the Maple Leaf has done for Canada. Yes, the Maple Leaf is a logo. But it’s also a people’s flag, proudly displayed as a symbol of identity by travelling Canadians of all political persuasions, creeds and ages. Canadians, like Australians, fought for the British under their red ensign flag. That’s a flag and a history that should not be forgotten, as the flag Australians fought under has been well and truly forgotten. Canadians can and do acknowledge their wartime flag in a way that Australians, with their rewritten history, cannot.

I quite like Gareth Morgan’s preferred flag, though it has four colours; too many. It’s well designed, but is probably too abstract for too many of us to identify as a people’s flag. It’s more an intellectual’s flag. And, while it might in time identify us to ourselves, it won’t identify us to the outside world, and that’s what a flag should do.

I would prefer a flag that others like too – whether left or right of political centre – that says where I’m from but says nothing else about me. I want a flag that people who like the present flag will also like. I want a flag that both I like, and that many people who are unlike me also like. I like red, white and blue, the silver/white fern, and the southern cross. And I would like our neighbours from the red continent over the ditch to once again adopt red as the backdrop of their flag.