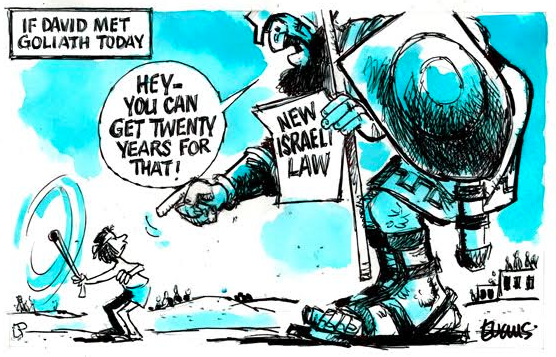 On 20 July 2015, the Israeli Knesset passed into law legislation imposing harsher sentences on Palestinian stone-throwers. Israeli Justice Minister, Ayelet Shaked, commented: “A stone-thrower is a terrorist and only an appropriate punishment can serve as deterrence.” The discriminatory injustice behind the legislation was made clear as MK Jamal Zahalka told Knesset members: “Imagine we brought both the stone-throwers and those who caused them to throw stones, in front of a judge. Who would the judge put in prison? The one who demolished a house, expropriated the land, killed the brother? Or the boy who threw a stone?”

Another MK, Ahmad Tibi, added: “There is an order in the Army that if soldiers arrive at a place where Jews are protesting and one of the protesters jumps the soldiers, they are not allowed to shoot him because he’s Jewish. Under the same circumstances, when it’s Arabs, they shoot to kill. ‘Neutralise’, they call it.”

What sort of penalty should apply then, to Israel’s leaders and military for using the regime’s fighter jets and artillery to fire missiles into densely populated areas, targeting schools, hospitals and ambulances in Gaza? When will Israel’s leaders be brought to account for forcing people out of their homes in the West Bank in order to conduct military ‘exercises’? If throwing stones should be punished with 20 years imprisonment then, by that measure, even a life sentence would not suffice to account for Israel’s violent night-time invasions of Palestinian homes and the abductions, at gunpoint, of terrified children. According to video evidence released by the Yesh Din human rights group and published in the Israeli newspaper Haaretz, Israeli soldiers do nothing to stop stone-throwing settlers. Video evidence published in the Guardianreveals Israeli Army complicity in standing by while illegal settlers open fire on, as well as stone, Palestinian villagers. Another video filmed by Israeli human rights organisation, B’Tselem, volunteers shows two Israeli settlers driving in Occupied Hebron, where Palestinians live but are not allowed to drive — the video shows the Israeli police letting the stone-throwing settlers just drive away.

On 30 July 2015 settler arsonists invaded the village of Derat, east of Yatta, and threw a petrol bomb into a home, damaging the contents. The settlers also sprayed racist hate slogans on the walls of the house. On Friday, 31 July 2015, in the Israeli Occupied West Bank village of Duma, an 18-month-old Palestinian baby, Ali Sa’ad Dawabsheh, burned to death in his home in an arson attack perpetrated by Israeli settler terrorists. His father, Sa’ad Dawabsheh, who suffered severe burns in the attack succumbed to his injuries and died early on Saturday. Sa’ad’s wife, Reham, and his son Ahmed are still being treated for life-threatening burns. Reham is suffering from third-degree burns on 90% of her body and is on life support and four-year-old Ahmed has second-degree burns on over 60% of his body.

Two Palestinian homes were set ablaze in the attack and graffiti with the words ‘Revenge’ and ‘long live Messiah’ scrawled in Hebrew was left behind by the terrorists. There are at least three illegal Israeli settlements near Duma village and, according to the UN, at least 120 attacks by Israeli settlers have been documented in the Occupied West Bank since the start of 2015. A recent reportby Yesh Din, an Israeli human rights organisation, showed that more than 92.6% of the complaints laid by Palestinians with the Israeli police go without any charges being filed.

No doubt hoping to raise a mental image of Palestinians that avoids acknowledging their sadness and anguish, the BBC covered the news of the arson attack with a strange headline: “Palestinian fury as ‘Jewish settler’ arson attack kills child.” Using quote marks to separate the words ‘Jewish settler‘ from the rest of the headline is an obvious attempt to cast doubt upon the probable identity of the perpetrators. The very last sentence in the article reads: “The settlements are considered illegal under international law, though Israel disputes this.” What does the BBC wish the reader to understand from this sentence? The settlements, it says,are ‘considered’ illegal. They are either illegal or they are not. The term ‘considered’ is added in order to add uncertainty, not to inform. Whenever the illegality of Israel’s Occupation settlements are mentioned, the BBC routinely adds a comment, such as“though Israel disputes this”. What, exactly, does Israel dispute? The illegality? The illegality is a matter of fact. That Israel does not feel obliged to respect international humanitarian law? That also is a fact.

The scourge of Israeli settler brutality and vandalism

The imposition of ideologically hate-driven, racist, Jewish-only communities in the West Bank and East Jerusalem is a daily and nightly non-stop living nightmare for the people of the land. Between 2004 and 2015, the number of Israeli settlers in Occupied Palestine grew from 421,000 to more than 600,000. Since 2004, while the world looked the other way, Palestinians have suffered, according to Palestinian Monitoring Group data, 11,000 settler attacks while the Wall increasingly separates Palestinian communities from each other and from their farmland. The resulting economic and psychological damage is immeasurable. According to Palestinian Negotiations Affairs Department statistics, since the beginning of this year alone there have been over 187 incidents of settler violence against Palestinians. Some of the most indoctrinated Zionist activists live in the settlements; and Israel knows that it can rely on their presence to bring increasing suffering and despair to the Palestinian population. Israel’s Army of Occupation combines with settlers to advance the Zionist enterprise by encouraging Palestinians to surrender more and more of their land. Some examples of how this works are given below.

In Jerusalem, a bus driver, Mohammad Barakat, was admitted to hospital on 27 July 2015 with severe burns to the eyes and upper body after being pepper-sprayed by two settler militants.According to B’Tselem, Israeli forces rarely make efforts to protect Palestinians from settler violence and, often, “rather than restricting violent settlers, Israeli security forces impose restrictions on the Palestinian.” B’Tselem reports also that: “The undeclared policy of the Israeli authorities in response to these attacks is lenient and conciliatory. Perpetrators are rarely tried, and many cases are not investigated at all or are closed with no operative conclusions.” Watch this video taken by the Christian Peacemaker Teams (CPT) showing settler children attacking Palestinians and human rights observers. Israeli settler violence (both armed and unarmed) includes agricultural sabotage, arson, beatings and other physical assaults, criminal property damage and attacks on holy places, both Muslim and Christian. In many cases, the violations have been perpetrated with Israeli Army complicity.

The daily reality – how the other half lives

There are no Israeli Jewish refugees. Jewish Israelis never have to wait at checkpoints, their homes are never broken into by heavily armed soldiers, their fishing boats never under attack, their children never abducted, their homes never invaded or destroyed, their olive trees never uprooted and their crops never bulldozed, either by soldiers or foreign settlers. Israel is the only country in the world that prosecutes children in military courts (UNICEF report) and only Palestinian children are forced to appear before military courts or face solitary confinement. No air raids have ever wiped out whole city blocks in Israel. These war crimes and other violations of international law are suffered solely by ‘one side’ – that is, the Palestinian people. Is it any wonder that young, spirited Palestinians try to demonstrate defiance and some pride by throwing stones at their tormentors? They face up to 20 years in gaol for doing that, while Israel’s illegal and vindictive settlers never have to face justice for committing acts of violence against the Palestinian population.

It is certain that there will be no 20-year sentences for settlers who throw stones and because of the lack of will, so far, on the part of Western political leaders, there will be no calling to account for Israel’s leaders either. Israel has made it plain, by both word and deed, that that there is nothing to negotiate other than the complete surrender of Palestinian human rights to the demands of expansionist, racist, political Zionism. It is hypocritical and mendacious to promote the illusion that the only path to peace is through direct negotiations between the captive, defenceless Palestinians and their complacent and obdurate occupiers.

Now is the time to publicly recognise the truth and at long last speak and act honestly and effectively in defence of Israel’s victims. For a start, this country could set an example to the world by ceasing to invest, through the NZ Super Fund, in the manufacturer of white phosphorus, Israel Chemicals Ltd (ICL). The NZ Super Fund CEO’s pretence that the organisation has no knowledge of Israel’s criminal use of white phosphorus, when the whole world has seen the results, betrays the Palestinian people and brings disgrace upon New Zealand.