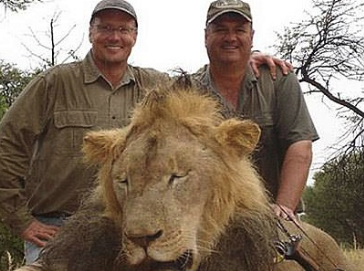 Killing people en-masse is frowned upon in most parts of the world. Serial killing is a definite no-no.

Instead, psychopaths satiate their bloodlust by more legal means.

One option is to participate as a combatant in one of several officially designated War Zones around the planet (Syria, Iraq, Afghanistan, several parts of West Africa, Texas, etc). The down-side is that you can be sure that several hundred other combatants will be shooting back at you. Not good.

Another option is a much safer bet for our friendly, neighbourhood psychopath;

An unknown number of other hunters are also shooting and slaughtering their way across the African continent and other parts of the world.  In their sights; animals that are not armed with high-tech killing gear. It is hardly an equal “sport”, if one can remotely call it that.

There is definitely a reduced Occupational Hazard of returned fire that combatants in War Zones have to face.

Trying to peer into the psyche of these so-called “hunters”, some of Corgatelli’s remarks gave a chilling insight. From her Facebook page;

“Everybody thinks we’re cold-hearted killers and it’s not that.There is a connection to the animal and just because we hunt them doesn’t mean we don’t have a respect for them.”

“Day #2 I got a amazing old Giraffe. Such a amazing animal!! I couldn’t be any happier!! My emotion after getting him was a feeling I will never forget!!!”

“ Yesterday was day 1 an amazing day!!! Got my beautiful beautiful Kudu!! It was my #1 want on my list and I got him on the first day!!! Loving it there!!”

Corgatelli’s undisguised joy at killing is disturbing. In some instances, her pleasure seems almost  sexual in nature.

Also worrying is the number of messages on her facebook page highly critical of her destructive behaviour – and to which she appears totally oblivious. This is clearly someone out of touch with social norms, including public odium of  her public revelling in killing wild animals.

Not only does she lack any empathy with the creatures she targets – but seems thoroughly unphased by the torrent of criticism directed at her. There seems to be  a distinct disconnect with her emotions.

People like Palmer and Corgatelli are, unfortunately, not alone in the world. There are plenty like them. People who cannot empathise with others, whether human or non-human.

Some become serial killers. Some become despotic leaders (think Hitler, Stalin, Pinochet, Pol Pot, et al). Others, who are wary of a date with the executioner or spending their lives in a cell, look to other prey.

Same psycopathy. Different victims. And like the killers who murdered their victims at a  movie theater or a school, they prefer their targets to be defenceless. Preferably at a distance, so the targetted animal – or humans in at least one instance – cannot hope to fight back.

Psycopaths; cowards, as well as comfortable around lethal weapons.

Well, I have a solution that protects defenceless animals but meets the inate homicidal needs of psychopaths-cloaked-as-hunters: Survivor Hunter Island!

That’s right – we set aside an island devoted to hunters. Real hunters. Hunters who pit themselves against each other. Hunters who take on the ultimate quarry: other human beings!

We put a dozen hunters in and they indulge their passion to seek out their prey and blast away to their hearts’ content. No rules; twelve go in; one comes out.

Fitting into our current craze for Reality TV (you can see where this is heading), the hunt could be televised using carefully secreted cameras and Autonomous Flying Vehicles, and broadcast throughout the world. (We can put television sets on the African veldt, in case any lions or giraffes want to watch proceedings.)

The revenue from advertising and sponsorship (the NRA would surely be lining up as a bell-weather sponsor) for Survivor Hunter Island could be used for conservation projects around the world. Hunters, after all,  are staunch supporters of conservation, as Ms Corgatelli claimed.

Hunters and billionaire libertarians could even share their islands as libertarians plan their little tax-free havens somewhere out in the middle of the ocean;

Bag a brace of hunters and a couple of  billionaires?

The Guardian:  ‘Giraffes are dangerous’: another trophy hunter under fire after defending hobby

The author confesses to being a meat-eater;

“I pay homage to my carnivorous ancestors,” admitted Frank Macskasy, “But I don’t kill for pleasure. Even when a tele-marketer calls or Jehovah’s Witness comes to the door during ‘Dr Who’, I resist the urge. Killing for food is part of Nature’s less-glamorous ‘circle-of-life’. Killing for pure pleasure indicates a deep need for psychiatric care. Apologies to vegetarians, Vegans, and all the chooks, sheep, and cows, I’ve eaten in my life.

In my next life I’ll probably come back as a chicken in a Tegel barn.

Or celery. I hate celery.”