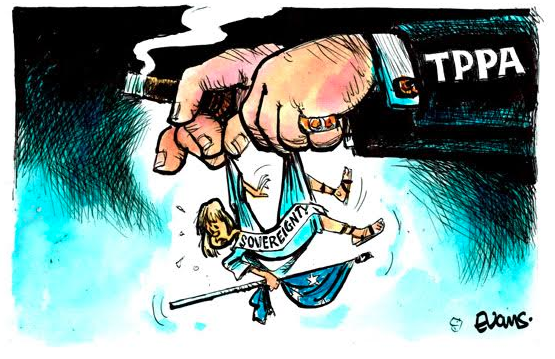 Since 1984 we have opened our borders to the global market. It is something many have accepted and become accustomed to, yet is still disputed as either the harbinger of capital and posterity, or the degradation of utility for the average New Zealander. Whichever you believe, the neo-liberal momentum is coming back for a second round – the TPPA.

As Chris Trotter pointed out, successive governments have have been clamoring for a Free Trade Agreement (FTA) with the U.S for nearly 20 years, and now the time has come to sell our wares.

Before I explain why it’s a terrible idea, there needs to be an outline of the perceived benefits.
First up, the $5 billion dollar influx to NZ’s economy from the lowering of tariffs and trade. Secondly, it will be an agreement spanning 40% of the worlds GDP and NZ cannot afford, literally and politically, to stand aside. Lastly, it is a momentous liberalization of trade, and we have traditionally been a trading nation dependent on exports and so we’ll see greater value and demand for our products.

Negotiator and Minister of Trade Tim Groser has backtracked on this $5 billion statement. In fact, $5 billion is not that much – as of the March 2015 quarter, exports were $65 billion of GDP, and household spending $135 billion. The sum thrown around pales in comparison to our general exports already, and Groser’s figure is in dispute. So why are we sacrificing so much for only a small increase in export revenue? Forget imports – our borders have been wide open for years. The TPPA will make little difference to that margin.

Other than figures, the most lauded benefit has been dairy. The colossal failure of negotiations in Hawaii happened because we are being locked out of traditional protectionist sectors (especially in Japan, America and Canada) and there will be little benefit for us. Andrew Hoggart, Chairman of Federated Farmers, has reiterated these same lines.  The U.S Department of Agriculture only estimated a 0.01% increase in GDP growth even if all the trade barriers and tariffs are removed and our dairy exports are welcomed.

We must also consider the recent dive in the price of milk solids, leading to an official cash rate cut to 3% (if you have a floating rate for a mortgage, fix the rate now – it ain’t getting better) and the banks clamoring for payments from small farmers who have invested in dairy. The fact our entire currency is cut because of the collapse in one sector clearly shows our dependence. John Key downplays the issue, claiming that it’s no big deal, that dairy is only 5% of our GDP. Yes that’s true, but it’s 25-30% of exports.
With a boom, there is a glut. Key’s government has given incentives at every turn for dairy farms. A $400 million irrigation subsidy, and huge swaths of land conversion to dairy. It has been harping on about doubling primary exports – unsustainable exports which the global market no longer wants. To make matters worse, we don’t even value our exports according to their worth. Fonterra is the second largest dairy conglomerate in the world, but has one of the lowest value produce. We have focused entirely on the rapid production of raw exports, and nothing else.

So why the articulation of our dairy problems? Because dairy is either our saving grace, or coup de grace. We entered these negotiations with the intention of becoming “the Saudi Arabia” of milk. This is not going to happen, and a description of how our reliance on dairy as our sole bargaining chip is volatile was needed.

What about the other 70% of exports?

I can’t imagine less subsidized and promoted sectors will fare any better. Logging, possibly. But we have that covered with China’s FTA. We don’t need another market. Everything else is relatively small or exploiting natural resources, such as mining and natural gas. These face public opposition and are not reliable as avfactor for continued growth.

Speaking of China’s FTA, proponents of the TPPA point to China and South Korea as successful trade deals. The most fallible point with this is, that when all consideration and concessions are analysed, we ultimately benefited from the trade deal with China and South Korea. They did not demand as many, or as critical, sacrifices as the TPPA does. Using China as a defence, in which we made no such concessions, is intellectually dishonest.

And here we begin with what we directly concede to the other 12 nations.
Intellectual property rights, including far more punitive measures for copyright infringement and pirating.

We will no longer be able to support government infrastructure, like Kiwirail, as it will “discriminate against businesses”. The same goes for local assets at a regional government level. This includes public broadcasting, electricity, water, local initiatives, IT and farming.

If we do help any sector, whether it be support or a stimulus package, they will have the ability to litigate against our government. This also includes introducing polices that go against the wishes and conduct of business. It’s happening in Al Slavador, as the government decided against granting a mining permit, and it’s happening in Germany as they attempt to phase out nuclear power. To say it’s not going to become a reality is selective dissonance.

This shackles democracy, as Professor Jane Kelsey points out (a must-watch video, ignore the first few minutes) and it take away the ability for the government, our representatives, to do the only job they have – facilitate our daily lives and enact what we voted for them to do.

Despite Key and various Ministers insistence for the last few months that it will not effect domestic land purchases and Pharmac, they have now admitted it will. Government will not be able to regulate speculation, or foreign buyers. They will not have the capacity to  the selling of housing, as this will be seen as anti-trade. Any protectionist methods will be persecuted. Neither could we cap land sales, as it will take away the need for the Overseas Investment Office to approve large asset purchases.

And then there is Pharmac – the most hotly contested of them all. While there will be an increase in price through the extension of patents (making our own generic and subsidized versions unavailable to domestic market for another five years) Key has promised that this will not be the burden of the consumer. The government will cover the cost, apparently through invigorated trade. While I do believe Key when he says that we as consumers will not pay directly, I can’t help but feel we will suffer in a cyclical way. Increase in taxes maybe? There is discussion surrounding a new GST tax for online purchases on foreign websites that seems to be getting tract. Or maybe it will be cuts in other sectors to make up for it? Education maybe? As Mike Hosking says, “the proof will be in the pudding”.

Yet that’s the problem. We won’t see the pudding and how good it tastes until we’ve purchased the ingredients. A terrible analogy, but blame Hosking.

The TPPA is demanding far too much, and we receive so very little. A negotiation based more on appeasing the big players than benefiting New Zealand as a country. I’m not a nationalist, and I’m not opposed to free trade or immigration. What I do oppose is multi-national companies having the leverage to hold our government to account and dictate terms, the ability to plunder our public assets without protest, and to control our democratic mechanisms under the guise of ‘free trade’.

Damon Rusden is a chef, journalist and law student with an avid belief in civic education and accountability.