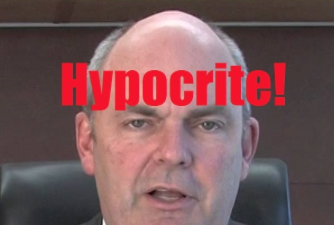 Fun Fact #3: Approximately 1.2 million people – roughly a quarter of the population –  have taken out  student loans.

Fun Fact #6: The student fees/debt system began in 1992. Prior to that, students had access to Bursaries and Student Allowances and tuition fees were minimal.

Sources: Ministry of Education, Beehive, NBR, and The Wireless

During Bill English’s Budget speech on 16 May 2013, the Finance Minister made perhaps the most  extraordinary announcement that I have ever heard from a New Zealand politician;

Making it a criminal offence to knowingly default on an overseas-based repayment obligation will allow Inland Revenue to request an arrest warrant to prevent the most non-compliant borrowers from leaving New Zealand. Similar provisions already exist under the Child Support Act. This will be included in a bill later this year.

It was extraordinary on at least two levels.

The first is because a loan defaulter does not normally fall under the Crimes Act. It is what is known as a Civil matter.

If, for example, you, the reader, default on your mortgage, rent, or hire purchase, the Lender does not involve the Police (unless deliberate fraud is involved). Instead, they apply to the Courts for a remedy.

For National to intend issuing arrest warrants, for student loan defaulters, takes the matter of a civil contract into the realm of the Crimes Act.

Secondly, this law – if enacted – would not stop people leaving New Zealand. It would prevent people returning to New Zealand.

The law targets ex-students with loans  who had moved overseas; who had defaulted on their loan repayments whilst overseas; and who then returned to New Zealand (perhaps for a funeral, holiday, or visit family). Only then were were they to be  arrested at an airport as they attempted to board a plane to fly out of the country again.

Under such circumstances; what loan-defaulting New Zealander in their right mind would ever consider coming back to this country?

The law was enacted, and as Alex Fensome reported for Fairfax Media last year;

However, others believe the increase [in former students declaring bankruptcy whilst overseas] is down to the Government’s more aggressive pursuit of recalcitrant debtors, and an attempt by some of the borrowers to wipe their New Zealand slate clean.

Student-loan defaulters can be arrested if they try to enter or leave New Zealand, under legislation passed last year.

A few days ago, it was reported; 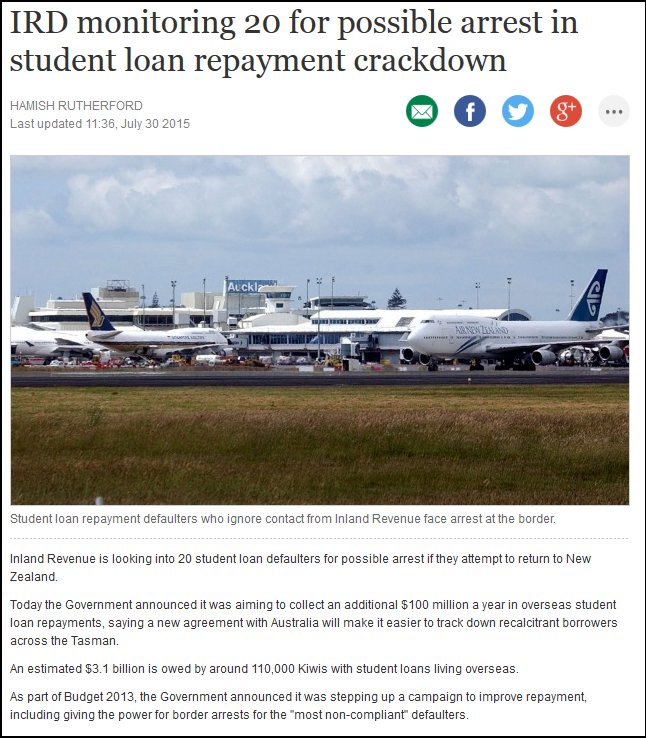 Ministers have also considered refusing to renew passports for those who do not engage with Inland Revenue.

As Finance Minister Bill English desperately tries to balance the government’s books and return to a Budget Surplus, it appears that National Ministers are prepared to go to any extraordinary lengths to claw back cash from New Zealanders. Whether those New Zealanders are low-paid paper-delivery boys and girls or the sick needing medication or ex-pat New Zealanders living overseas – this government is reaching deep into peoples’ pockets.

“Just because people have left New Zealand it doesn’t mean they can leave behind their debt.  The New Zealand taxpayer helped to fund their education and they have an obligation to repay it so the scheme can continue to support future generations of students.”

Which, when one looks into Joyce’s background, finds something curious.

Steven Joyce,  benefitted from a free, tax-payer funded, University education, with no debt incurred from his  tuition.

The facts are simple;

Joyce completed his University studies and gained his degree eight years before the Bolger-led National government introduced student fees/debt in 1992.

Joyce’s university education was mostly free, except for minimal course fees. He was most likely  also eligible for a bursary and/or student allowance, as well, to assist his living costs.

As Joyce was reported in the Fairfax story;  “The New Zealand taxpayer helped to fund their education and they have an obligation to repay it so the scheme can continue to support future generations of students.”

Will Joyce repay the cost of his University studies?

Or will he simply be one of those who benefitted from a near-free University education – paid by other hard-working taxpayers at the time  – and now insisting that others pay for their own tuition, racking up huge debts in the process?

Another case of a Baby Boomer telling Gen X to “do as I say, not as I do”?

Neither Joyce, nor Revenue Minister Todd McClay, have any moral authority to demand payment for tertiary education from any New Zealander.

Both men are hypocrites.

No one should take them seriously.

Shafting our own children’s future? Hell yeah, why not!

Budget 2013: How NOT to deal with Student loan defaulters