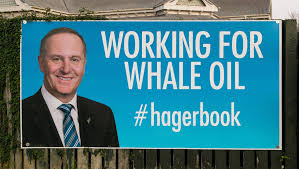 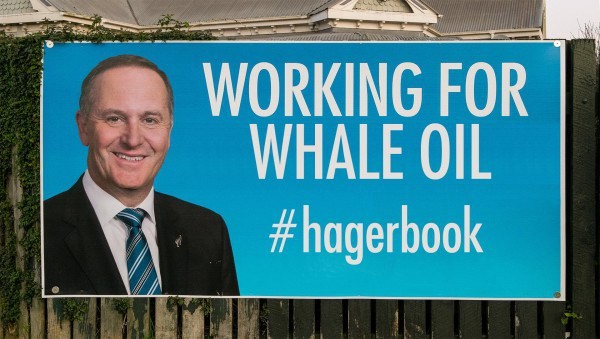 In August of last year, Nicky Hager released his bombshell book, Dirty Politics, which highlighted a level of corruption and abuse of political power at the heart of NZ’s democracy that has never been seen before.

One year on – what has changed?

Let’s remind ourselves of the allegations again.

So what has happened since August 2014?

Key claimed the entire event was a communist conspiracy, attacked Hager personally and refused to answer any more questions, remarkably, the mainstream media who had been so easily manipulated by Slater allowed Key off the hook.

The Right ignored the law that specifically allows for stolen emails to be published if they meet the public interest threshold and continued to personally attack Hager as a hypocrite who used stolen emails. Their refusal to engage in the allegations exposed how frail their defence was.

The Police, instead of investigating Slater, dropped all charges and instead in a remarkable move, busted into Nicky Hager’s house, seized all his papers (including information on Police corruption), lied about not looking at his notes and ruined his credit rating by contacting his bank. That case is still pending.

In a remarkably similar modus operandi of Slater, Donghua Liu made ridiculous claims about donating $300 000 to Labour, fanned by the NZ Herald – one of Slater’s favoured enablers – the entire thing stank of another black ops hit by Slater and Co. The Herald claimed they had a signed piece of paper by Liu that made his allegation an affidavit, that the editor couldn’t tell the difference e between  signed piece of paper and an affidavit was jaw dropping. Herald columnist John Armstrong went on to demand Cunliffe resign because he forgot an 11 year letter. Armstrong has never called  for Key’s resignation despite all the allegations in Dirty Politics. 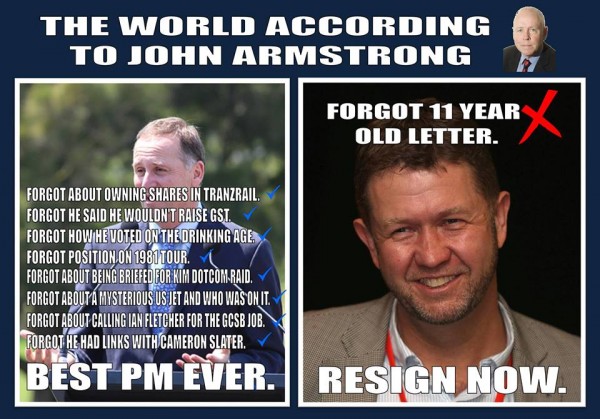 The SIS – the same agency that helped smear Phil Goff, gains mass surveillance powers, a huge increase to their budget and more resources.

Judith Collins was let off after a whitewash investigation into her involvement with Slater.

Campbell Live was killed off for political reasons after he caused Key too much embarrassment over Dirty Politics.

Slater won ‘Blog of the Year’ for his Len Brown story, and Cannon wouldn’t step in and take it back despite the disgusting level of coercion and involvement in manufacturing that story as outlined in Dirty Politics.

Rachel Glucina, the female Whaleoil who seeded her gossip column with right wing black ops spin, masqueraded as a PR expert when she was really writing a story for the NZ Herald that twisted Amanda Bailey’s words and painted her out as a political agent with an axe to grind. It showed the NZ Herald was still more than willing to play Dirty Politics to favour Key. The Press Council roasted the Herald for this shortly before Glucina left and the Editor stood down.

Matthew Hooton who handed Slater Nicky Hager’s address in the hope of Cathy Odger’s criminal clients would kill Nicky is still a panelist on every major political show.

Slater is still on ZB as a political commentator.

David Farrar who works hand in glove with Slater is still a political commentator.

Ben Rachinger alleged to have been paid by Slater to hack into the Standard. That allegation sits in front of the Police waiting investigation.

Colin Craig was attacked and smeared in another dirty politics attack and is now in the process of taking Jordan Williams and Slater to court for defamation. 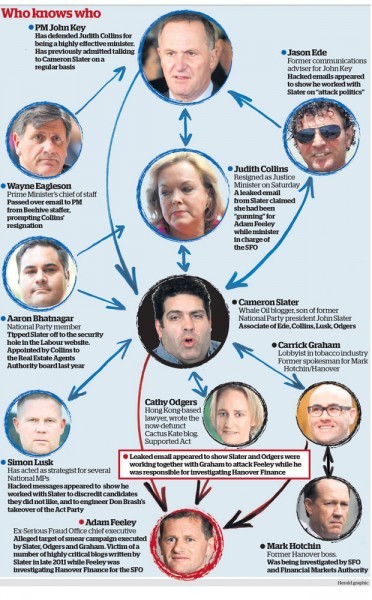 …but it leaves out the mainstream media who so willingly played along.

But the deepest shock to have come out of Dirty Politics is that NZers rallied to Key and re-elected him in a landslide. The nation who tore Helen Clark to pieces for signing a painting she didn’t paint didn’t recoil in disgust at Key’s outrageous abuses of power, they rushed to support him. What this says about us as a country I’ll leave to the historians, but the 2014 election result made us a lesser society.

Rewarding malice, cruelty and spite because your house price is over valued is a shame National voters should never be allowed to live down.

Nothing has changed in a year, the same players and still playing the same dirty politics and the same mainstream media are enabling it.

We are a lesser people for allowing this political sadism to dominate our political agenda, and at some stage the sleepy hobbits of muddle Nu Zilind have to take responsibility for allowing this cancer to rot Parliament and the Press Gallery to the core. 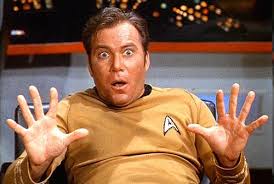 That awkward moment when Kim Dotcom, Assange, Snowden & Greenwald tell NZ that Key was lying and spying & they voted for him & TPPA anyway