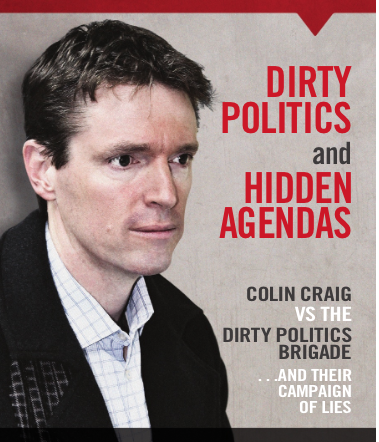 TDB pointed out when the campaign to dump Colin Craig began that this might just be another Dirty Politics attack.

Colin Craig agrees with us.

Here is his pamphlet

There is a lot in here that asks hard questions about the behind the scenes manipulations that occur when a story like this breaks.

In Dirty Politics, Jordan Williams is alleged to use sleaze to force Rodney Hide to step down as ACT Party leader. Both deny this, despite Jordan being the numbers man for Don Brash who took over when Rodney was removed as leader.

Like Luigi Wewege who tried to get his girlfriend at the time to sleep with Len Brown and record it, the Right seem to think peoples personal lives can be used to smear them no matter the ethics. In this situation, Jordan began a relationship with the woman at the centre of the allegations against Colin Craig.

Who is Mr X? It sounds like Matthew Hooton.

Colin is fighting back and for Colin’s fan base, the manufactured sleaze and attack politics only boosts him in their eyes. Sure the rest of NZ think this is cray, but people who are Conservatives have put up with the sting of mockery most of their lives and see the slings and arrows of outrageous blogs as proof he’s one of them.

Please Colin, let it be in auckland so we can all turn up to watch.

Don’t forget, this is now the 3rd ongoing legal action against Cameron Slater, if you were wondering.