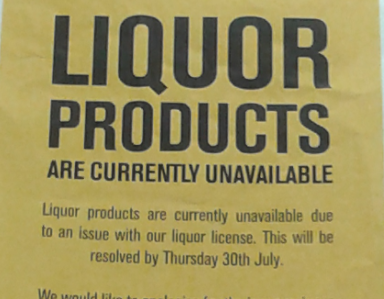 Our country has been described as “awash by alcohol” by more than one observer. In New Zealand, buying alcohol is easier than buying a car fuse at a petrol station. (I know this, I’ve tried.)

On Tuesday 29 July, I noticed the following signage at Kilbirnie’s busy Pak’N’Save supermarket;

Indeed, the entire liquor section at the supermarket – a not inconsiderable area of the complex – had been blockaded by a Great Wall of Loopaper,  chippies, sugary soft-drinks, and other highly-processed, salted snack-foods;

Perhaps what really caught my attention was the wording of the yellow signage, at regular intervals adorning the Great Wall;

Liquor products are currently unavailable due

to an issue with our liquor license. This will be

this issue has caused and we appreciate your

Breaking the law and selling liquor to sixteen year olds is defined as an “issue” by Pak N Save’s management?

The term “issue” has supplanted the previous terms that might also be applicable in this case; “problem”; “stuff-up”; or simply, “breaking the terms of our liquor license by illegally selling to young people under 18”.

Any one of those terms would be more honest than a hazy veil of euphemism, referring to losing a liquor license for five days as an “issue”.

Forgetting to reapply for a liquor license might be deemed an “issue”. Selling to under-age kids is a major screw-up. (Also somewhat illegal.)

I wonder if the supermarket’s owner would be as forgiving of a shoplifter caught with a dozen Whittaker’s chocolate bars (Whittakers being better quality than Cadbury, any day) down her blouse, casually apologising for the “issue” of not paying for the goods?

There seems to be a casual – almost dishonest manner – by which the supermarket has presented their transgression to the public. As if National had loaned Pak N Save a couple of their spin-doctors, to minimise any public disapproval of the “issue”.

Our government has the very best of spin-doctors, and we are daily mis-informed; distracted; deflected; and outright lied to by Ministers who have been caught engaged in questionable activities.

John Key’s assertion that a prisoner at Mt Eden Prison “fell” of the balcony, rather than being pushed by fellow in-mates, was his version of Pak N Save’s “issue” with their liquor license;

“One of the claims that had been made, I think, was that someone had been thrown off a balcony – in fact, actually, Serco say that the person jumped off the balcony, or tripped, or fell.”

It is ironic that in the Age of the Internet; of near instantaneous communication and super highways of information, that we have more misinformation; half-truths; “spin”;  and sheer lies thrown at us than ever before.

It is not just alcohol we are awash with – it’s lies.

In the case of politics, the irony is that we, the tax-payer, pay spin-doctors to help government ministers, to lie to us.

Fairfax media: Kilbirnie Pak ‘n Save in booze ban after selling to pair of 16-year-olds