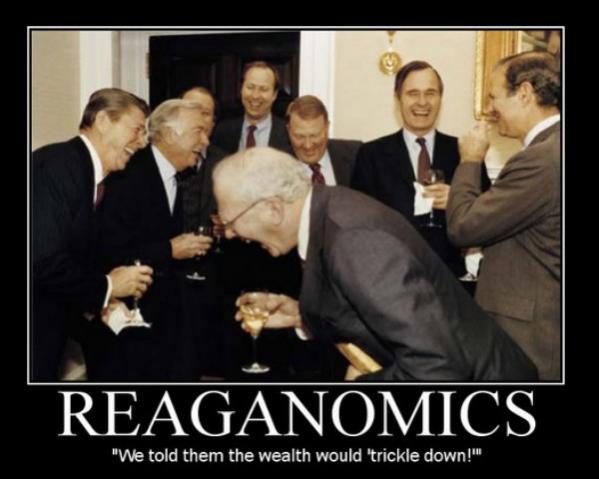 In 1987 Bruce Jesson`s `Behind the Mirror Glass` provided a multi-level analysis of the neo-liberal takeover as it was occurring. The New Zealand stockmarket was transformed by corporate predators and speculators. The likes of Brierley’s, Chase and Judgecorp arquired target companies and commercial properties purely for short term profit. No goods were produced or  traded, money was manipulated to make yet more money (until the October 1987 stockmarket crash). Meanwhile elite figures within the Reserve Bank and Treasury abandoned Keynesianism for Friedmanite monetarism and other forms of Chicago School Economics.

A similar conversion happened at the top of the Labour party after David Lange toppled Bill Rowling as leader. In the wake of Thatcherism and  Reaganism Roger Douglas, Richard Prebble and David Caygill embraced neoliberal policies at the expense of social democracy.

All of these factors came together during and after Muldoon`s snap election of July 1984.

Under David Lange Labour`s election manifesto was ditched in favour of Treasury`s economic blueprint, Economic Management. A bureaucratic coup had occurred. In  `Fragments of Labour` (1989) Jesson explained how these developments fractured the Labour party itself. The far right Backbone Club (precursors of Act),future members of the New Labour party and all those in between flew apart in acrimony.  In `Only Their Purpose is Mad` (1999) Jesson argued that the neoliberal policies of National and Labour governments favoured finance over production.

Globally and nationally, capitalism was being shaped by rentiers and speculators independently of production for use. Jane Kelsey`s `The FIRE Economy` explicitly updates Jesson`s analysis and confirms her place as New Zealand`s foremost defender of economic sovereignty.

To summarise her argument adequately requires a short digression on economics.

For capitalism in general to reproduce itself, money capital has to be realised through production, productive capital must be realised in commodity form and  commodities must be realised as money in market exchange. Money surpluses accruing to capitalists then become the raw material for money capital to be reinvested in production. This general sequence is based upon the the extraction of surplus value from labour during the production process. Independently of production, merchant capitalists may purchase commodities cheaply and sell them at a profit (M-C-M).

Alternatively, money lenders and speculators employ money to create monetary profit (M-M), a strategy which may expand to destabilise the capital realisation process.

Broadly, M-M profit circuits can be generated out of Finance, Insurance and Real Estate, hence the acronym FIRE.

The crucial point is that these profit circuits have become endemic to a system which critics term `financialised capitalism’. As the 2008 global financial collapse demonstrated, this kind of capitalism is volatile, prone to crisis and economically polarising.

Global capitalism really is run by the 1% and within this tiny grouping a financial oligarchy prevails. Kelsey`s comprehensive account addresses both the global and national aspects of financialised capitalism. My discussion here will focus upon the latter in regard to the local repercussions of the financial crisis and the dangers of Auckland`s housing bubble.

On the face of it New Zealand survived the crisis `pretty much unscathed`.

The large Australian banks were prudentially sound compared to those in North America and Europe. Australian and New Zealand governments provided fiscal stimulus and `staved off  a  more serious recession`.

Dairy exports to China and other markets were booming. Behind the scenes, however, Kelsey points to major economic problems. Domestic growth was fuelled by cheap credit (and growing debt ) for households, farmers and other businesses. When cheap international credit dried up after September 2008, a wave of finance company collapses exposed small and medium sized investors. They could not recoup their money and had little legal recourse in a weak regulatory environment.

After the Christchurch earthquakes central and local governments could not speed up the glacial response of foreign based insurance and reinsurance companies; beyond the Earthquake Commission there was no insurer of last resort.

Meanwhile, currency volatility adversely affected agricultural and manufacturing  exporters. Billions of dollars of daily, speculative trading  was, and is, driven  by hedge funds, mutual funds and insurance companies  with no connection to  commodity trade transactions.

Finally, a growing real estate bubble especially in Auckland, is damaging for the whole economy. Here, Kelsey`s analysis is especially incisive; domestic and offshore speculators are not the only villians of the piece. The major banks also fuel the bubble and base their business models around it (at the same time as bank economists give `objective` commentary to the media).

Kelsey`s cites  evidence to show that mortgage lending became the major source of the banks profit since the 2008 financial crash. She notes that `from 2012 they began aggressively peddling poor quality mortgages by offering low interest rates,minimal or no deposits,and free gifts or legal fees.` In this environment, notwithstanding interventions from the Reserve Bank, household debt increases and growing numbers of renters are forced into precarity.

When the bubble bursts, perhaps in response to another major global financial event, the socio-economic consequences could be disastrous.

There is much else to commend in Kelsey`s book. She identifies the fiscal and monetary `pillars` of financialised capitalism in New Zealand, outlines the central features of global finance and suggests international policy alternatives beyond the austerity regimes of England, Ireland south and eastern Europe. Domestically, the prescience of Kelsey`s analysis makes her book a must read for Andrew Little, Grant Robertson, James Shaw, Julienne Genter and Winston Peters.

The Key government and its cheerleaders are, of course, the beneficiaries and representatives of financialised capitalism itself. That they will ignore or dismiss this book attests to its prescience and importance for the people of New Zealand.