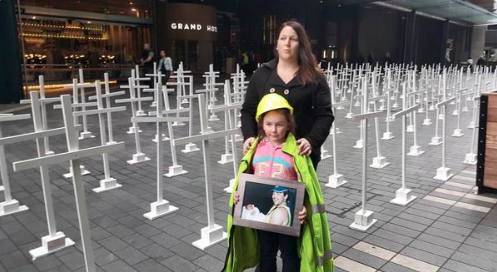 National Party stooges met at their conference by the symbolic graveyard of all the workers who have died on National’s watch.

The Union movement was born out of the horrific worker injuries that occurred in pre-regulated NZ. The anger from workers dying while employers walked free generated a political voice that demanded reform.

Where is that voice now and where is the societal anger that brings change?

The watered down health and safety laws that were supposed to be a meaningful response to the Pike River atrocity are a slap in the face to those Pike River families and the families of every single one of the 291 workers who have died on the job since.

This is law for National’s business mates at the cost of the workers who help them create their wealth.

Because NZers middle class dreams are now to be property speculators and we have a media more interested in paying attention to Max Key, Mike Hosking and Paul Henry, wider society are as blind to our work safety issues as the mountain of dead workers our lax regulation has reaped.