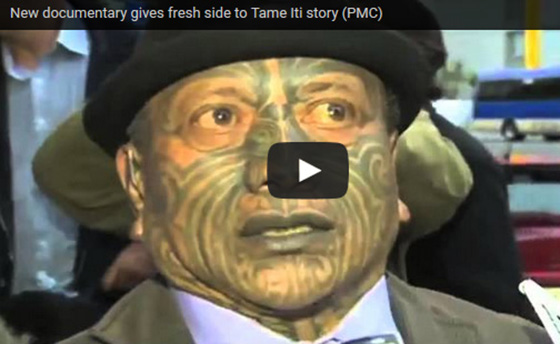 INVESTIGATIVE journalist Kim Webby’s incisive and compassionate new documentary, The Price of Peace, about Tūhoe campaigner and kaumatua Tame Iti and the so-called “Urewera Four” won a standing ovation at its premiere during the NZ International Film Festival this week.

It deserved this – and more. Webby has crafted arguably the most brilliant film portrayal of race and cultural relations in New Zealand in contemporary times.

She has examined a criminal case of national interest to explore biculturalism and justice in general, and specifically the litany of injustices imposed on the Ngāi Tūhoe people for generations.

And Webby has exposed the hypocrisy and myth making over both the Tūhoe case of justice and the disturbing facets of the current political orthodoxy around surveillance.

The 87-minute film – made over a period of seven years – is essentially about the trial of the Urewera Four and its aftermath following the notorious “terror” raids in Te Urewera in 2007.

It portrays a striking and polarised duality about how mainstream New Zealand viewed the arrests and the people who were brutalised by this masked “swat” team-style attack on a peaceful and laid-back community.

The defence lawyer for Tame Iti, Russell Fairbrother, puts it succinctly when he talks in the courtoom about New Zealand having two worlds that don’t easily speak to each other.Contrasting Pakeha and Māori world views were laid bare in the courtroom.

Nobody could watch this documentary and come away unconvinced of the trumped up political charges at the core of this documentary.
Nuanced profile
Pacific Media Watch contributing editor Alistar Kata, herself of Ngapuhi and Cook Islands Māori heritage, has interviewed both Webby and one of the three co-producers, Christina Milligan, a television lecturer at AUT University, and reported this nuanced profile about the documentary.One of the topics the documentary explores, according to Kim Webby in the PMW interview, is the role of the MSM in the portrayal of Tame Iti and the Tūhoe people.

KW: [The media] is always gonna go for the most sensational…you know the most dramatic…and so I think that’s why Tame has been branded as this activist…

But Webby is also quick to point out that it isn’t about criticising individual journalists, rather a criticism of the changes in the media industry itself:

KW: I mean these days everything’s broken down into news bites and there’s not an opportunity in news and often also in current affairs to really get far beyond that.

News and current affairs are always going to pick up the most polarising aspect and that is never going to really build understanding or draw cultures closer together.

CM: Our mainstream media is getting whiter and whiter by the day…and its almost like because we have Māori Television, we can now put all the Māori stories etc, indigenous stories over in that box and its ticked off, and we don’t need to worry about the wider public discourse. A big issue in this country – commercialisation of our mainstream media.

But both stress the importance of indigenous storytelling and the importance this can be as a contribution towards reconciliation and better race relations in New Zealand.

CM: There is a really key message in this film, which is one of the reasons why I’d like it to be seen more widely, maybe in the US, maybe in South Africa….that it is possible to apologise and forgive…

And if you look at the government and police apologies to Tūhoe for 170 years of behaviour, you can see that as a version of truth and reconciliation.

Yet, as Alistar Kata stresses towards the end of her news item, ultimately Kim Webby hopes the documentary will keep Māoridom alive and encourage understanding of the culture.

KW: I think it validates, specifically Tūhoe culture because it’s a specifically a Tūhoe film…and I hope that it will make Māori proud to be a part of that – and also spur on people to keep striving for that biculturalism and to really keep everything about being Māori alive.

The Price of Peace movie Trailer from ConbrioMedia on Vimeo.
Accused of terrorism, running a private militia and jailed on gun charges, Māori political activist Tame Iti fights for his tribe Ngāi Tūhoe to be a sovereign nation within New Zealand. How high is the price of peace?