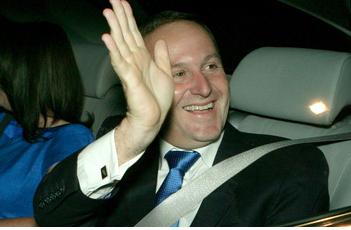 It’s been a source of frustration and a mystery akin to flying saucers, Loch Ness Monster, Yeti, Bermuda Triangle, etc. I refer, of course, to the unfeasibly high popularity of our esteemed Dear Leader, John Key.

Every time a scandal strikes this government (and there have been so many, I’ve lost count); every time it implements unpopular policies such as asset sales or expanding the powers of the GCSB; every time it fails to balance the budget despite numerous promises; every time it breaks election promises such as not raising GST, not interfering with Kiwisaver, bringing agriculture into the ETS, raising wages comparable to Australia; and as  housing  becomes an ulcerated sore in our cities – Key’s popularity apparently remains undented.

Recently, over a period of months, he was even found to have been assaulting a female staff member at an Auckland cafe;

– and he survived that humiliating experience, his political career apparently intact. His apolitical “blokeyness” seems to have pulled his backside out of the fire, yet again.

But is his popularity as consistently high as we think it is?

Since 2009, when Key’s “Preferred Prime Minister” (PPM) rating stood at 55.8% on 3News-Reid Research polling, it has been trending down ever since;

Key’s leadership is safe. The only contenders are careerist politicians – most of whom would make National unelectable as a government;

Except that Key’s leadership is fairly safe for the foreseeable future. Key has de-politicised politics and lulled the peasantry into a hypnotic state that would make Andrew Newton jealous.

But make no mistake, Key’s teflon has been gradually stripped away with scandal after scandal, and Andrew Little’s “Cut the Crap” remark in Parliament on 26 November last year showed that Key can be called out on his bullshit.

If an Opposition Leader can continue to highlight to the public that Key is in fact bullshitting them – it’s game over. Key will be forced to do Real Politics – and that is not his  forté.

One thing that the above polling shows with considerable clarity is that Key’s “dream run” has concluded.

A Wikipedia page of various polls also presents PPM data, but the TV3-Reid Research polls reach back to 2008, giving a more overall picture of the rise-and-dip of Key’s leadership.

A TV1-Colmar Brunton Poll on 19 July reports that John Key’s popularity as PPM has dropped 4 percentage points since May, to 40%.

The Daily Blog: The Prime Minister and the Waitress