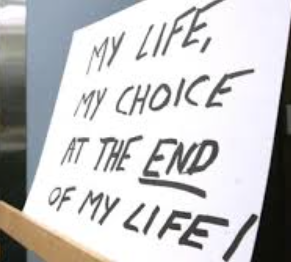 Euthanasia is a topic I have struggled with since I was a teenager. It’s not a topic I like to talk about as a woman in a wheelchair.

It’s taken me a long time to feel comfortable talking about it openly, so here it is.

To put it bluntly, a person should be able to end their suffering if they wish to. I have listened to the arguments against it and I see no rationality to them.

Is it a decision I would make myself? No. That’s mainly because my condition isn’t life threatening, my life is pretty sweet and my medical situation is stable.

I do however have those days where I open my eyes and the first thing I think to myself is ‘I don’t think I can do this anymore’. But somehow I still force myself up and do what I have to do – basically ‘fake it till you make it’. It’s probably super unhealthy psychologically, but it’s where my life is at right now.

Every time someone tells me to ‘keep being brave’, or to ‘soldier on’, I want to slap them. You can’t tell me how to react to my situation from your position of privilege.

I cannot imagine feeling that every single day, knowing your body will slowly shut down before switching off completely, all while being completely mentally aware, all while doctors tell you there’s nothing they can do.

It is not fair to expect someone to endure that pain. It is especially unfair to make that decision without at least empathising with the feeling I described above.

If you don’t know what it’s like to feel that pain, its not right to judge someone who wants to make that decision for themselves, nor can you punish doctors for listening to their patients.