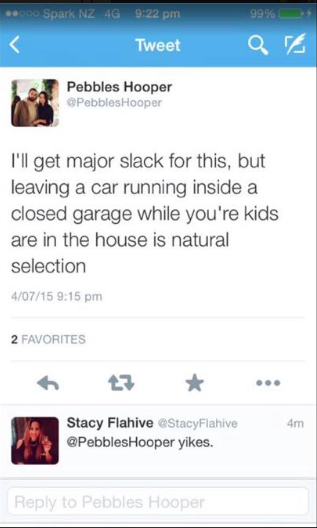 When I find myself moved to sit down and write a blog at 8am on a Sunday morning you can guarantee there will be typos. This will not be one of my better blogs as far as structure is concerned. That is because this blog is not a considered piece on a subject I have been pondering but a passionate and angry response.

Last night Pebbles Hooper made an unforgivably stupid and unkind comment on twitter. A comment that is not reflective of the New Zealand public. It is a comment that reflects only the nasty and emotionally void interior of the shallow and ignorant woman who wrote it.

My intent in writing now is to simply say that these kind of cruel and callous comments should not go unsanctioned. The comment pertained to the absolutely tragic incident that occurred in Ashburton. An event so unpredicted that apart from expressing my most sincere sympathy to the family I find it, as I’m sure most people capable of any empathy would, deeply disturbing that Peebles would utter anything else to the contrary. Where would you begin to pick up the pieces after losing three beautiful babies and their mother? There has been some debate on social media as to whether or not responding is helpful.

My view is simply this. To ignore this kind of comment, or to dismiss it as the utterings of a spoilt child is simply not an adequate response. To allow this to pass with no retaliation is to condone it.

Hooper is not a child.

She is a woman.

She was raised with privilege many can’t imagine and possesses enough social and cultural capital to be aware that what she was writing would draw a response. The family of the victims should not for a single minute be allowed to think that this stupid uttering is anything more than that.

It is tempting to find excuses.

It cannot be dismissed as thoughtless, as she knows by publishing it she will receive ‘slack’.

To excuse it as attention getting is also inadequate. Hooper has made comments in the past that have drawn attention. They all pale in comparison to the revolting nature of this post.

Unfortunately, Hooper is repeatedly given platforms to air her cruel, callous and ignorant musings. I believe the public response should be loud and fast. This is not an off the cuff comment that has been misinterpreted.

It is of an entirely different nature.

Hooper’s view is a not representative. She is an aberration.

The 3rd anniversary of my husband’s death is rapidly approaching. There are days when I am still so incapacitated by his absence that I find it hard to function. The empathy and kindness of others is the one thing that has reliably supported me through this process. People on the whole have surprised me by their kindness. To lose so many loved ones so unexpectedly is unfathomable. I, like most New Zealanders, want to be part of a society where we can openly acknowledge this terrible loss and offer nothing but love and support to the friends and families involved.