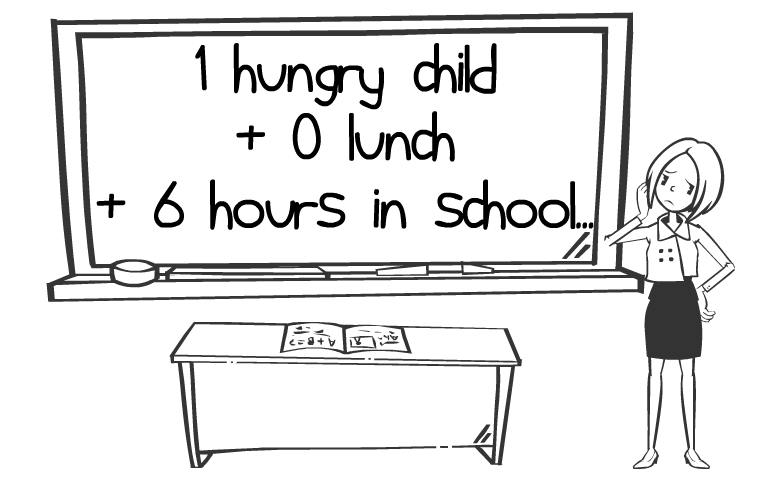 When I relieve in schools, I pack a hearty lunch – two or three rounds of sandwiches, 4-8 biscuits, a pile of crackers, and fruit coming out of the wazoo.  A fly on the wall might be forgiven for thinking this is a glutton at work – after all, I’m a woman of ample girth – but the fly would be wrong. I pack double or treble what I need because I know there will almost always be at least one student that needs to be fed in my class.

I could argue that it’s not my job to feed a child who has no lunch. I could rail at whoever sent the child to school without food. I could shake my fist at any number of things. But I don’t. I feed the kids.

Because no matter why they are standing in front of me hungry, there’s little to nothing they can do about it.

The child didn’t ask for this. They didn’t make this happen, They are on the receiving end of all manner of issues about which they have no control and they are hungry.

So I feed the child.

So they can focus.

So they can learn.

Actually, it’s far from simple, even in my small world of that particular class on that particular day. Because the older the child is, the more likely they are to lie and say they do have food, even when they don’t. Older kids will affect some swagger and say they’re not hungry or that they’ve eaten their food earlier. They’re not daft – they know what it’s like to be judged, and they don’t like it. So they don’t take the risk – especially if they don’t know me.

And given the comments I hear and read from adults on this issue week by week, I can completely see why these kids choose to protect themselves from the possibility of this ever-present criticism: These kids may not yet know enough to be ‘at standard’ in maths or reading, but they sure as heck are ‘well above standard’ when it comes to self preservation.

Better, they think, to be hungry than shamed.

And this is not only happening in low decile schools. I’ve seen this with my own eyes in schools from decile 2 to decile 9. To frame it as a decile-related issue is to ignore the complexity of what’s at play. Even kids living in wealthier areas come to school hungry or arrive with inadequate or invisible lunches.

So what’s being done about this?

Today’s Herald reports that when the Feed The Kids Bills came before parliament this year, Hekia Parata called three schools to get a feel for the situation. Three schools. What did she ask? How were her questions framed? Did she really think three calls would tell her all she needs to know about such a vast and complicated issue?

It speaks volumes about how seriously the issue is treated by the Minister (and perhaps explains why she applauds low-quality reports such as come out of the NZ Initiative) when she thinks three calls comprises high quality research.

So, here, I will help the Minister by sharing with her (and you) a report on child poverty by New Zealand’s Children’s Commissioner that explains clearly that 17% of Kiwi kids regularly go without the basic things they need and that NZ already spends $6-8 billion a year addressing the consequences of child poverty.

Consider the conclusion of the report:

“The ongoing costs of poverty, at 4 percent of GDP per annum, are simply too high for us to fail to address the underlying causes.

When we choose to invest more in young and disadvantaged children, we will position New Zealand better to meet the challenges of labour market demands, ageing demographics, and the drive for economic productivity so we can maintain our standard of living.

Strategic investment in children will benefit all New Zealanders.”

For the children, for the economy and for all of us, it is wiser to work on prevention: The ambulance at the bottom of the cliff is never an effective policy.