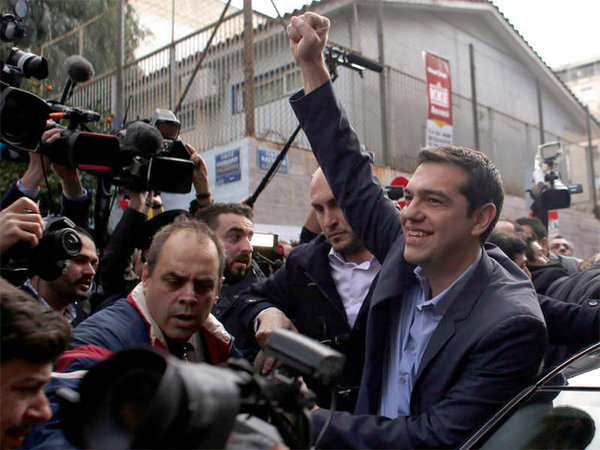 A spectre is haunting Europe – the spectre of a democratic alternative to austerity. The Syriza government of Greece incarnates that alternative, which is why the European Commission and the European Central Bank (ECB) have allied with the IMF to exorcise the challenge it represents. With few exceptions, political parties of every persuasion have tacitly or actively supported the anti-Syriza coalition.

Since its election victory in January, Syriza has fruitlessly sought to negotiate relief from the ruinous austerity imposed on previous governments, a program which has wreaked levels of economic and social destruction normally associated only with wartime, postponed recovery to a distant future and added to the burden of debt.

The government, despite its electoral pledges to end austerity, scoured the country for all available cash, slashed expenditure to achieve a budget surplus and met its payments to creditors. The Commission, the ECB and the IMF (now known as ‘the institutions’ rather than the Troika) made it clear from day one that debt reduction, the only realistic solution to the enduring crisis, was not on the table. While the government patiently sought to negotiate, and even agreed to a continuation of the ruinous bailout on terms which would have sucked additional billions of euros out of the economy, their proposals met with dismissal, contempt and insults.

The ‘institutions’ cynically refuse all responsibility for the predictably massive economic collapse. Limited government measures to ensure basic nutrition and continued access to electricity for the most vulnerable parts of the population were denounced as unacceptable ‘unilateralism’. For Commission head Jean-Claude Juncker, whose previous claim to distinction was consolidating Luxembourg as a tax haven for multinational corporations, no Greek tax proposal was regressive enough. Government proposals to maintain skeletal systems of collective bargaining and social protection were repeatedly condemned. The ECB orchestrated capital flight and a run on the banks by limiting Greek banks’ access to loans while spooning out just enough emergency liquidity to maintain permanent pressure.

Now the ‘institutions’ have taken new measures to sink the Greek economy in response to the government’s decision to call a July 5 referendum on the bailout terms. The goal is to reinforce rule by banks and so-called technocrats (who are in fact highly political) and remind the citizens of Greece they must never imagine they might challenge the power of finance.

The simple truth is that the social savagery called austerity could never produce the result it was ostensibly intended to deliver.

The negotiations were never about economics, but about regime change – and eliminating possible political contagion elsewhere in Europe.

In 1953, the London conference of Germany’s creditors agreed to write off half of Germany’s sizeable pre-war debt and made payment of the remainder contingent on Germany’s ability to pay by running a trade surplus. No surplus, no payments. The London Agreement was political; it was intended to fortify Germany’s position in the Cold War. The decision to undermine a government of the left in Greece is equally political. The assertion, endlessly repeated during 6 months of negotiations, that Europe can weather a Greek default and exit from the euro, can be turned on its head. Europe can digest a substantial write-down of Greek debt – in fact it would be beneficial to everyone – but the ‘institutions’ are determined to deliver a political lesson, and not just to Greece.

Throughout the negotiations, the government has defended its position patiently, at times eloquently. Its proposals for limited measures to defend workers, pensioners and the poor from the ravages of an unprecedented depression would have appeared as the most moderate Keynesianism three decades ago. That they are now denounced as a threat to the European order tells us a great deal about that order and about the underlying crisis of European and global politics. Syriza’s election victory has shown the potential power of a broad movement of the Left which is prepared to contest the status quo. Solidarity is crucial, now more than ever, for Syriza to continue fighting. Unions should be organizing that solidarity.

IUF is one of the largest Unions in the world