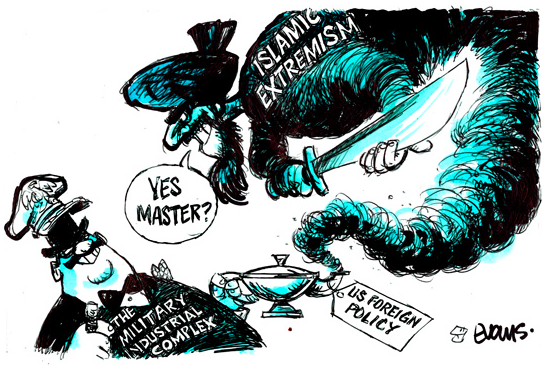 I just can’t take this ‘training’ of Iraqi soldiers seriously…

More than 700 soldiers of the Iraqi 76th Brigade marched out on Sunday.

…what on earth can those 700 troops do? We’re spending $65million and so far have a tiny fraction of the Iraqi Army trained. We have 20 odd ‘trainers’ and over 100 SAS ‘guarding’ them. What we really have is a facade of ‘training’ and 100 SAS helping US forces target strikes pretending to ‘guard’ the trainers.

The whole thing is a giant National Security deception wrapped up in a Prime Minister induced domestic Muslim terrorist fear mongering threat to keep the sleepy hobbits from asking too many questions.

The US have blown $20 billion over a decade trying to train the Iraqi Army while the Saudi’s have been spending billions arming ISIS in the first place.

What on earth can our $65 million do in that ocean of mercenary blood money?

NZ should be using its position on the UN Council to call Saudi Arabia and Turkey out for funding proxies who are generating the violence and challenge Iraq for their Shia para-military death squads who have created a civilian population sympathetic to the ISIS.

Our involvement in this war is a disgrace.

Key has purposely manufactured the domestic Muslim threat and has singled out their Community as one being watched when he is challenged on what threat is posed to NZ by ISIS. Even if we accept his argument that there is a domestic threat to homegrown Muslim radicalism and ignore that he’s irresponsibly creating community friction for the sake of politics, then surely re-invading Iraq would be a trigger point for those dislocated and disconnected youth?

Even if we accept Key’s threat paradigm, his solution to send troops triggers the very danger he claims he’s trying to fight!  This is our price for being in ‘the club’, it’s got nothing to do with human rights.

I am looking forward to this months Table Talk where the issue of NZ in Iraq will be debated with MC Mike McRoberts and Paula Penfold.

It will be live streamed on The Daily Blog 7.15pm July 14th.