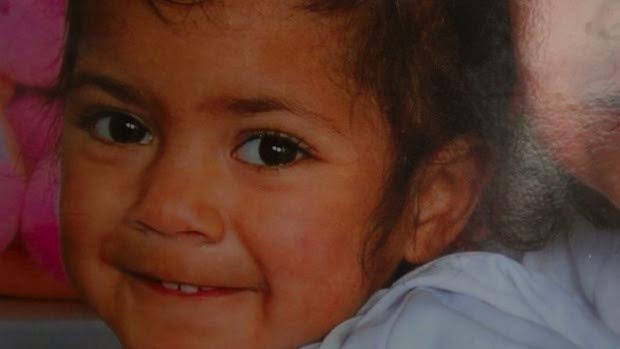 To describe it as illustrative of how National views the poorest people of this country with barely-concealed disdain would be an understatement.

Tolley was former Minister of Corrections and Police, from 2011 to 2014.  Her crowning “achievement” was showing off  the destruction and compacting of a seized motor vehicle;

Her other “achievement” was over-seeing the awarding of a twentyfive year long contract to multi-national company, Serco, to manage the newly opened 960-bed Wiri Prison. That contract will sting tax-payers to the tune of $900 million – almost a billion  tax-dollars over quarter of a century.

Tolley’s latest ministerial ‘gig’  is to hold the portfolio of Minister for Social Development.

Last year, two year old old Emma-Lita Bourne died last year from a brain haemorrhage. Emma-Lita had been suffering from a pneumonia-like illness in the final days of her short, misery-filled, life, leading up to her death.

“I am of the view the condition of the house at the time being cold and damp during the winter months was a contributing factor to her health status.”

“Some would argue with the recent case, for example, with Emma-Lita Bourne who died in the state house, [a] damp house, why not just give those families more money to pay their power bill, rather than give the organisations money to come in and work and all the rest of it?”

“And, and, when you look at something like Whanua Ora, they are doing some of that. See, see, what we’ve got with the focus on individual programmes and agencies working in silos, families don’t work like that. They’re very complex issues so if I don’t know the details of that particular family…”

Tolley admitted not knowing the details of that particular family!

Any normal, rational  individual in a position of responsibility in such a situation would have called for a full report on the incident, as well as a copy of the coroner’s findings.

Yet, according to her own statement, Tolley has evidently not done so.

She does not  “know the details of that particular family”.

Dann suggested to the Minister “in charge” of Social Development that a solution would be to  provide heating for cold, damp State houses;

“One solution though, one solution at least is that the child, if there are children in that family, they get a guarantee of a warm house.”

So what I’m saying is, one part of that, you can solve one part of that. But actually all the other problems are going to continue. And what we’re trying to do is get, um, much more joined up work from the State agencies, but our focus [is] on actually changing the outcomes for those families.”

So, there you have it.

Heating cold, damp houses is “not necessarily” a solution.

But “joining up State agencies” will somehow provide the warmth to keep children out of hospitals.

This is ‘Pythonesque’ humour at it’s darkest and comes at the expense of sick and dying children.

No wonder Tolley made this eye-brow-raising comment a few minutes into the interview;

“I liken it to National Standards.”

National Standards – another of National’s misguided, moronic, and messy experiments.

Perhaps the most jaw-dropping comment from  Tolley also came at the very beginning of the interview, when she complained;

There is good reason why we do not have “good evidence” and “good data” –  because former Social Development Minister, Paula Bennett did not want it;

Because having hard data on poverty means government having a measurable, defined problem dumped into its lap. And three years ago, Bennett was having none of that.

As Labour MP, Jacinda Ardern, said at the time;

“The message is clear. Either Paula Bennett doesn’t want to admit to the scale of the problem, or she is afraid of exposing her government’s lack of progress in fixing it.”

Bennett’s excuses ranged from this;

“One week they can be in poverty, then their parent can get a job or increase their income and they are no longer in poverty … This is the real world, and actually children move in and out of poverty at times on a weekly basis.”

… to parroting neo-liberal clap-trap like this on TVNZ’s Q+A, in November 2013;

“At the end of the day, what is going to make the biggest difference for child poverty, in my opinion and this government’s opinion, and it is tackling the tough stuff. That is long-term welfare dependence. It’s actually more jobs, yeah, so that’s business growth. It feels like to me that Labour’s more interested in welfare growth and not business growth, and as a consequence, are we ever going to agree on that? Probably not.”

… and finally, this garbled ‘gem’ for why she refused to measure child poverty, in the same interview;

“So why do an official measure that then by very definition still has, quite frankly, you know, it’s, sort of, wherever you put the measure, you’re always going to have people in poverty, because you’re taking a median income, taking housing prices off it, so there’s always going to be people- “

Hopefully Minister Tolley will read this and understand why the department she inherited from her predecessor (Paula Bennett) has no “good evidence” or “good data”.

As for solving the life-threatening problem of cold, damp houses that are killing our children – Tolley’s plans to ‘re-jig’ government departments  and NGOs will not heat one single house.

But it will result in more children becoming ill, and dying.

This is happening on your watch, Minister Tolley.