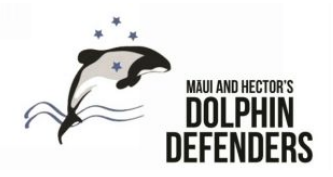 New Zealand based conservation groups are supporting the call for better protection of Māui dolphins after the International Whaling Commission reiterated the need for the Government to do more, at its meeting this week.

The homegrown group ‘Māui and Hector’s Dolphin Defenders’ echoes the IWC’s sentiment. Long-time ‘Dolphin Defender’ and organisation chair Christine Rose says, “Scientific evidence shows Māui dolphins cannot sustain a single human induced fatality in the next few decades if the species is to survive. But the current government is negligent and failing to address these risks”.

“Scientists estimate that the Māui dolphin population has dropped from about 1800 since the 1970s to its current population of about 55 today. But despite the fact that fishing activities account for 95% of Māui dolphin mortalities, trawl fisheries continue to overlap most of the Māui dolphin range”.

Mrs Rose says “In 2013 Nick Smith, then Minister of Conservation, committed to 100% trawler observer coverage within four years in the core Māui habitat, apparently to address the known risk of trawl net entrapment and to appease critics”. But his promises have come to very little, says Mrs Rose. “The promised 100% observer coverage has resulted in only 11% of trawl days with an observer”. “That was only 51 out of 479 trawl days that actually had an observer to pick up on bycatch which is a proven cause of dolphin death”.

Mrs Rose says “A high standard of proof is required to close areas of fisheries to protect these dolphins. But verified reports of live dolphins outside the current protection areas, even as far away as East Cape, have prompted no action. And no wonder we’re not seeing the inevitable instances of bycatch, there are no observers on board”. ”Clearly the Ministers of Conservation and Primary Industries (responsible for fisheries enforcement), and the industry themselves, are failing the world’s smallest and rarest dolphin”. “No wonder that’s a cause for such local and global concern.”

“It’s the third year in a row New Zealand’s apathy has been condemned on the international stage of the IWC” says Mrs Rose. “They rightly call for proper protection, within the whole dolphin habitat including harbours. The current regime is a half-hearted mishmash of policies that are failing to protect the dolphins from their biggest threats.” “In fact, this government adds to these risks with its permissive approach to seismic testing and deep sea mining”.

Mrs Rose says “Every Māui dolphin needs to be safe, if the subspecies is to survive. With only about 55 or less left, that’s not too much to ask”.