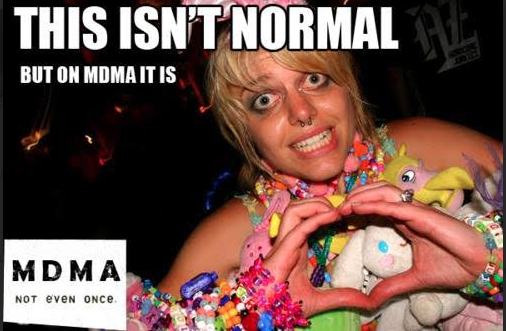 Yesterday, I put out a piece on TDB stating that the Gateway Drug theory was something of a paranoid delusion.

Today, I’m having to eat my words somewhat. Because, you see, Peter Dunne has just demonstrated it in action.

I nearly dropped my biscuit this morning when I read this piece from 3News stating that Peter Dunne was reportedly “willing to discuss” a proposal to legalize MDMA.

It’s taken him quite literally only a matter of weeks to proceed from a one-off usage of medicinal marijuana through to contemplating the use of harder drugs like ecstasy – a clear example of the slippery slope you start down once rational, evidence-based drug policy comes into play 😛

The initial claim by emergency department toxicologist Paul Quigley that actual-MDMA is safer than alcohol is not controversial. MDMA is one of the more studied recreational substances in (relatively) common use, and study after study has confirmed it to be generally less harmful than alcohol. Here’s two graphics drawn from leading medical journal The Lancet to illustrate my point.* You’ll also note the position of LSD (Acid), Psilocybin (Mushrooms), and Cannabis (Great Mighty Wrecker of Civilizations) relative to each. Perhaps Dunne might like to try those next.

But back to the comparison between MDMA and alcohol.

Apart from noting that they’re both used by people to limber up socially and/or improve their dance-skills (or, more likely, improve your subjective perception of your own ability to cut a rug, regardless of what anyone else thinks) … they’re not really very similar drugs.

That’s why I’m enormously leery of anybody who suggests “X [pardon the pun] harmful drug is legal and regulated – therefore Y less-harmful drug ought to be legal and regulated as well”. It really gets up my nose when people do this, because that’s not particularly sensible drug policy. Conceding we already have one moderate-to-major social ill [again, pardon the pun] out on the marketplace does NOT mean we ought to add to our problems by legalizing-and-sanctifying another one.

However, that’s not why I (and apparently, the Health Minister) think the idea might have merit.

First up, on its own terms and responsibly used, actual-MDMA presents a *relatively* low risk to both consumers and society. That’s not to say it’s absolutely harmless – indeed, far from it. But frequently, deaths and injury chalked up to the drug are, in fact, the result of other complications associated with use rather than a direct result of the drug itself. Acute dehydration (possibly associated with extended dancing), serious hyperthermia (again, often associated with extended physical exertion while dancing), and over-hydration (generally as a result of people over-compensating for what they’ve heard about MDMA’s dehydration effects) are not so much intrinsic characteristics of the drug as they are the natural results of unsafe use and inadequate education about how to more safely consume it.

Now, the pharma-skeptics among you are presumably tutting and wondering if what I’m saying is true, why reports of physiological and psychiatric dire consequences from taking ecstasy are so common.

Most ecstasy sold in New Zealand is not actually MDMA.

This is the case for a variety of reasons, ranging from the war in Afghanistan disrupting saffron cultivation (and hence, the supply of a necessary precursor for MDMA synthesis called safrole) and leading to a global shortage of MDMA; through to the increasing prevalence of illicitly imported “research chemicals” synthesized in China and more easily found on our shores thanks to the Free Trade Deal with same that Labour signed us up to in the mid 2000s.

Both of these factors combined mean that for the average Kiwi pill dealer (whether at importation, wholesale, or retail level) … it’s hella, hella easier and less expensive to track down and move a variety of substances which very definitely aren’t MDMA.

Some of these substances, like Methylone, aren’t so bad. They’re reasonable analogs of MDMA – and importantly, unlikely to be highly harmful in human consumption.

Others, however, like PMA and PMMA, are regularly lethal.

The trouble is, the average end-user (unless they have a reasonable knowledge of chemistry and the materials to carry out reagent tests) has very little idea what it is they’re ingesting. Complicating matters further is the fact that many New Zealand pills aren’t just comprised of one substance – but instead, two or more stimulants in combination.

It’s one thing if your pill has been cut with baking soda (or, for gel caps, bulked out with glucose) … it’s quite another if your designer phenethylamine has been adulterated with caffeine, ephedrine, or even flat-out methamphetamine.

This is particularly the case as ingesting several different drugs simultaneously – each with a different response profile and toxicity limits – doesn’t simply “stack” the effects one on top of another. Instead, in many cases the result is a combination of the original drug’s effects “squared” and then multiplied by the others rather than a simple addition of one set of outcomes to another. And needless to say – that’s dangerous in the extreme.

The increasing availability of field testing kits from stores like Cosmic Corner is a huge step forward in some regards, as it now means that users can fairly quickly determine *before* taking them some of the chemicals that are likely to be in their pill.

But they’re not perfect, purely because there are so many different potential substances that can wind up in our pills – and due to the fact that a single reagent test is unlikely to show up *everything* psychoactive that’s in a single hit. Or, for that matter, advise on potential contraindications.

Given all of this, it’s tempting to ask the easy, obvious question: why do people bother trifling with such potentially dangerous drugs.

And the simple answer is … I don’t know. I can’t speak for anyone else (without betraying a few confidences, at least) any more than I can answer comprehensively why eighty percent of New Zealanders chose to indulge in a more socially acceptable drug called alcohol which kills up to 800 of us per year.

I don’t drink, personally; and I’ve made that choice as a direct and attributable result of the health impacts which it has on me. There may also have been an incident which resulted in snapchats of me clad in nothing but a teacup deep in the bowels of ACT on Campus’s Epsom Command Bunker being sent around the world, the last time I actually got drunk. Between this, and the fact it knocks my bipolar around something fierce, it seemed plausible to conclude that Alcohol and I were *not* likely to have a productive relationship.

But the no-risk-rather-than-low-risk absolute teetotal approach is not for everyone. For many people, they see something so desirable in drinking that even despite the hangovers, possibility of waking up with Denis from Accounts, or fact that almost twenty percent of guys my age die thanks to alcohol use (a figure that’s one in ten for women) … that they’ll keep on drinking, regardless.

Heck, we can even make the stuff illegal (just like most of the other substances mentioned thus far in this piece – hmmm) and it STILL won’t dissuade many drinkers from giving up their drug of choice.

Part of that’s human nature – and part of that’s due to the fact that alcohol is chemically addictive and will alter your brain with long-term large-scale exposure so that it has trouble functioning as it used to without it.

Of course, what happened with Prohibition in the States during the early 20th century is a direct analog for the ecstasy-market here in New Zealand today. People didn’t stop consuming alcohol just because it was made illegal, any more than Kiwis today refrain from consuming cannabis due to the Misuse of Drugs Act 1975.

Instead, black-market entrepreneurs moved in and started brewing their own moonshine when they were unable or unwilling to attempt to smuggle properly distilled alcohol across international borders. This resulted in many thousands of Americans ingesting a product which could lead to blindness, lead poisoning, or even an untimely death. Due to the lack of regulation and standardization which illegality enforced, you just simply didn’t know what it was going to do to you until it was already too late.

So if we’re serious about having a rational, evidence-based drug policy in this country (and to my interminable surprise, it looks like Peter Dunne might almost even be considering a change of tack to same) … then the idea of moving to regulate MDMA is at least worthy of being debated.

The all-important and overarching principle of Harm Reduction which ought to guide ALL public-health decision making would appear to suggest that the legalization of MDMA might very well be a step forward in protecting the health of our young people.

Having said that, there are legitimate concerns to be raised that the legitimization of any drug through legalization might bring with it an increased prevalence of use, rather than simply making use safer for those who would do it anyway. But I’m not so sure. The evidence from Portugal’s drug decriminalization experiment certainly seemed to suggest fewer young people were indulging in ecstasy as a result of law reform efforts there.

Oh, and just before we all get too carried away lining up to praise Dunne as our new Party Messiah … he has clarified that the Government would most likely be “hesitant” to legalize ecstasy – so it’s therefore entirely likely that the notion of meaningful law reform on MDMA under this government will find itself first shelved, and then sneakily dropped.

But still, the fact it’s even being openly considered by Dunne thanks to the Psychoactive Substances Act (much less plugged in public) stands in marked contravention of his previous stance of outright opposition to even allowing debate on the legalization of natural cannabis.

I can’t help but wonder if if he’s going to be pinged for this by Miss “Marijuana Leads To Meth” over in the Justice Ministry.

*Footnote: (As an aside, one thing you may notice about both relative drug harm graphs is that in addition to alcohol, each lists something already prescribed as a common, long-term medication within New Zealand – and in both cases, they’re indicated as more harmful and dependency-inducing than MDMA. For those of you playing at home, that’s methylphenidate, in the case of the latter – which you’ll probably know as Ritalin; and amphetamine in the case of the former – the right handed isomer of which is presently used as an enhanced treatment for more intractable ADHD and co-occurring Bipolar.)