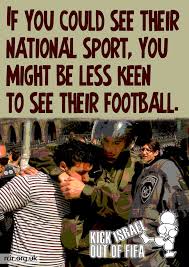 On Friday, 29 May 2015, the Palestine Football Association (PFA) dropped its bid to have Israel suspended from FIFA. In making the bid, the PFA President, Jibril Rajoub, had promised “I am going to end the suffering and the humiliation of the Palestinian footballers – it is our right.” The cave-in came as the US ordered Swiss police to extradite to the US six FIFA officials for alleged corruption. The arrests took place with well prepared New York Times reporters and photographers already on the scene. The timing of the event was, from Israel’s perspective, perfect. According to an Information Clearing House article the US Justice Department has wide authority to bring cases against foreign nationals living abroad if there is even the slightest connection to the United States, such as the use of an American bank orinternet service provider. US prosecutors have used this facility repeatedly in cases it deemed involved international terrorism.

With world news media attention focused on US action in Zurich, PFA President Rajoub took his unilateral decision to capitulate without consultation, catching FIFA representatives by surprise as the last minute proposals were presented. Earlier this week Rajoub had firmly stated: “Our requests are clear, just and fair: Freedom of movement, end of racism and expulsion of all teams from illegal Israeli settlements in Occupied Palestine competing in the Israeli league.” But FIFA President Sepp Blatter, on behalf of Israel’s allies, had strenuously opposed the PFA‘s attempt to seek justice. According to the Times of Israel, Blatter “strongly opposes the PFA bid” and a FIFA statement was issued, saying that the PFA is bringing politics into football and that Israel has not breached FIFA’s statutes. The FIFA statement read: “The executive underlined that a FIFA member association should not be suspended if it has not violated the FIFA statutes.” So in the end, as theBBC reported, the head of the Palestinian Football Association‘s promise that nothing would persuade him to remove the request from FIFA‘s formal agenda meant nothing; Jibril failed to fulfil his promise that there would be noback room deals and the Palestinian people once again, as they have been on so many occasions, found themselves betrayed.

Palestinian football is conducted under the extreme conditions imposed by harsh Israeli military occupation, the very nature and purpose of which is racist colonialism. World Jewish Daily.com, referring to the Zurich arrests,gloated, “Bad news for FIFA, but what about for Israel, which has been fighting a de-legitimisation campaign by the Palestinian Football Association?With FIFA making headline news, it is unlikely the FIFA Congress will want to take on another controversy.” Israel imposes onerous restrictions on Palestinian National Football players. Team members that live in Gaza face severe restrictions, often being detained when travelling for practice and frequently denied access to the West Bank altogether. Israeli checkpoints regularly hold up shipments of sports equipment to the extent that some never arrive. The Israel Football Association supports the Israeli government.Association President Ofer Eini insists that football and politics should be kept separate, while knowing full well that restrictions put on Palestinian players come from the Israeli government. The restrictions on Palestinianmovement imposed by Israel contravene Article 13.3 of the FIFA Statute, specifically in relation to Article 13.1(i) and its related articles in UEFA rules.Yet Israel continues to participate in FIFA with impunity.

In 2009 the promising football career of 22-year-old Palestinian midfielder,Mahmoud Sarsak, was ruined by the Israeli military when he tried to leave Gaza to attend a match in the West Bank. Sarsak was imprisoned without charge or trial for three years, a practice which is plainly unjust and racist; Jews are never subject to the process which Israel calls ‘administrative detention’ and the practice is, quite rightly, condemned by international human rights organisations. Earlier this year a letter to the Israeli Equal Employment Opportunities Commission from the Coalition Against Racism in Israel, an umbrella group of Jewish and Arab organisations, drew attention to racist remarks by the Beitar Jerusalem football coach, Guy Levi. The letter resulted in the Equal Employment Opportunities Commission ordering the soccer club to retract the coach’s ban on Arab players.

Blatter actually called, not so long ago, for tougher sanctions to deal withracism in football: “We have to use our rules to suspend teams, to take away their points or even to relegate them if racism continues.” He also said that individual sanctions weren’t enough and football clubs involved in racism and discrimination that violated FIFA standards should be suspended altogether.FIFA’s website has a page condemning racism and discrimination that proclaims: “Discrimination of any kind against a country, private person or group of people on account of ethnic origin, gender, language, religion, politics or any other reason is strictly prohibited and punishable by suspension or expulsion.”

The Israeli FA remains complicit in Israeli state occupation violence and restrictions on Palestinian sports people. Israeli football includes five teams from occupation settlements that are recognised by FIFA as illegal under international law. Israel’s oppression of Palestinian football has an air of consistency. In November 2006, all players based inside the West Bank and Gaza Strip were denied exit visas by the Israeli occupation. In October 2007,Israel again denied exit visas to Palestinians for the second leg of a crucial 2010 World Cup qualifier between Palestine and Singapore. In May 2008, the Palestinian team was denied the right to travel to the 2008 AFC Challenge Cup. Following the 2011 World Cup qualifying match against Thailand, Israel denied entry to the West Bank for two players, Mohammed Samara and Majed Abusidu, who therefore were unable to travel back with the team from Thailand. Israel not only banned Palestinian striker Ziyad Al-Kord from travelling but also destroyed his home. Another Palestinian player,Tariq al Quto was killed by the Israeli Army.

During Israel’s Operation Cast Lead blitz on the Gaza Strip, three Palestinian footballers, Ayman Alkurd, Shadi Sbakhe and Wajeh Moshtahe, were among the Palestinian casualties. And so the list of Palestinian sports victims continues to grow. The Palestine national stadium in Gaza was bombed by Israel on 1 April 2006, leaving a crater in the centre of the field. FIFA announced that it would fund repair work but Israel bombed the stadium again in November 2012 during its Operation Pillar of Cloud blitz. Several more football grounds were also bombed.

As a Palestinian sports official in Ramallah, who wished not to be named, put it: “Israel gets to launder its image using the cliché that football can unify people. But the reality is that Israel uses every opportunity to undermine our sporting capacities, just as the occupation is being used to destroy us politically, culturally and economically.” Apartheid era South Africa, where most sports were racially segregated, eventually found itself barred from the Olympics, suspended from participation in world football and unable to send cricket teams abroad. International Rugby also came under strong pressure to stay away from South Africa. Today, tragically, FIFA corruption, Zionism and US state power have combined to present a united front against not only the Palestinian people but also all of us, in defiance of the Fourth Geneva Convention and fundamental human rights. Massive global support for the Boycott, Divestment and Sanctions movement (BDS) against Israeli racism isone essential way for us to tell our leaders that we have had enough of their lies, betrayal and complicity.