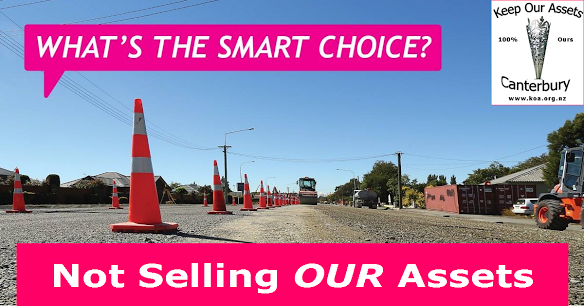 The Mayor’s proposal to sell $$750m worth of publicly-owned Christchurch assets over three years instead of doing it all in one hit still adds up to the same thing.

The Mayor’s proposal, which also includes the promise of a “special consultation process” before any sale of shares in Orion, the port and airport companies, shows that she is trying to make it more palatable to the people of Christchurch, who have consistently expressed opposition to the Council selling our assets. The “special consultation process” requires the public to fall for the creation of “core” and “non-core” assets.

We won’t swallow this dead rat, no matter how much sugar the Mayor puts on it.

It’s worth repeating the six key points of Keep Our Assets Canterbury’s submission last month to the Council on this subject:

1/ Selling the Council’s commercial assets will only be the beginning, not the end. Next in line will be social housing; then water, parks, libraries, roads and the whole gamut of Council assets and services. The Council is on a slippery slope to flogging off the lot – not just all of the commercial assets but everything.

3/ Who will buy these assets? It won’t be “Mum and Dad”. Inevitably it will be transnational corporations and the people of Christchurch will lose control over our own destiny, as a cohesive portfolio of publicly-owned and hugely valuable assets will be broken up and sold off to a collection of different transnational corporations, whose top priority is securing the highest profits and biggest returns for their shareholders.

4/ The Council, and Christchurch, will lose the ability to build in resilience to the city’s vital infrastructure. “(Orion Chairman Craig) Boyce said city ownership of Orion had allowed the company to do some things that private owners would probably not have done such as earthquake strengthening from the 1990s. ‘This had a huge effect to get the power on quickly’. With regard to debate over city ownership of certain assets, Boyce backs Orion staying city owned. ‘Utilities providing essential services particularly where they are seen as a natural monopoly, I think they should stay with the community’” (Press, 12/7/12). Contrast publicly-owned Orion’s proud record of acting in the public interest with the shabby record of the overseas-owned Wellington Electricity.

5/ What’s the rush and panic? The Auckland City Council Website makes a valid point. “It is fair to spread the cost over the generations who will use the assets”. The Christchurch City Council is being stampeded by debt hysteria, shock doctrine and disaster capitalism into making hasty and irrevocable decisions that will have permanent negative effects on the people of Christchurch.

6/ Democracy is our greatest asset, and the one which is under greatest threat in Christchurch. No Councillor campaigned in the 2013 election on a platform of selling assets. Those who now call for asset sales should resign and seek a mandate on that policy at the next local body election.