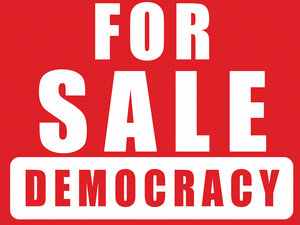 In the standard textbooks in political science it’s asserted that the western nations live in ‘liberal democracies’.  If we look at how the term ‘liberal democracy’ is defined, I cannot see how this argument can be true.

Liberal Democracy is defined by political scientists as a society where people have an equal say in making decisions that affect them, and that people are the best judges of their own interest. Looking at the first of these principles, recent research refutes any claim that people have an equal say in the USA. Political scientists Martin Gilens and Benjamin Page show that overwhelmingly, the rich get what policies they want. They conclude that “Not only do ordinary citizens not have uniquely substantial power over policy decisions; they have little or no independent influence on policy at all.” And that “economic elites stand out as quite influential in the making of U.S. public policy.” The study looked at almost 2000 policies over a 21 year time period. There is no similar study done in NZ, unfortunately. But given that we have undergone similar policy changes, though not nearly as extreme as the US, it should not surprise anyone if similar results were found.

This form of public relations, or propaganda as it was called in less euphemistic days, has always received great endorsement as a cultural value in our society throughout its history. One of the founders of western propaganda, Edward Bernays, defined democracy quite differently to those in academia, saying that ‘the conscious and intelligent manipulation of the opinions of the masses was an important element in democratic society.’ With political scientist Harold Lasswell in the 1920’s endorsing it as a technique to control the public mind.  In today’s time, it has become so engrained and normal, that politicians now win awards for their manipulation of the public. Namely in Obamas hope and change campaign in 2008, where he won an award for being the best marketer of the year. This was also true for Don Brash’s award winning billboard campaign in the 2005 campaign, which the NZ herald praised it as “elegant and humorous”.  If you take a look at the recent Green Party co-leader James Shaw, there have also been those on the left, namely Chris Trotter that has compared his skill in rhetoric to Obamas. In New Zealand, the politician Richard Prebble also expressed contempt for the idea that people are the best judges of their own interest, when there was 90% public opposition for the privatization of telecom during the 1990s, noting that “New Zealanders should be proud to have a government strong enough to resist a pressure group of such proportions.”

As for Liberalism, the views of what is now called classical liberalism are mostly forgotten and misrepresented in contemporary political thought. A good example is one of the favorite philosophers of the NZ elite; F.A Hayek, who claimed to base his ideas on classical liberalism. But, from I’ve read of classical liberalism, the ideas presented were quite anti-capitalist by principle. If we take Kant’s political writings, he defines the difference between an artificer who is his own master, and does work that he is able to sell to someone else later on, which is different from what he calls a laborer, who allows others to make use of him, and therefore is not a citizen. One of Hayek’s favorite philosophers Wilhelm Von Humboldt expressed similar views in the Limits of State Action, saying that ‘the laborer who tends a garden is perhaps in a truer sense its owner, than the listless voluptuary who enjoys its fruits.’ Similar views were also put forth in Karl Marx’s theories of workers alienation, and have been kept alive by 20th century philosophers Bertrand Russell and Noam Chomsky, who revived these ideas in his essay called “Government in the Future”.

Coming back to what’s taught in schools, if the studies done by Gilens and Page are accepted, political scientists should not disregard their own research and should teach students that their society is a plutocracy, and if this research holds true for our own society, then we should also teach this elementary truth. That is, if they want to live up to the standards of rationality. I myself have not yet seen enough evidence to come to any conclusion on what NZ’s political system is, yet given we have undergone policy changes that have made the rich incredibly wealthy, while real wages have stagnated, it would not surprise me if research was conducted to give overwhelming evidence that we live in a plutocracy.

The method of hiding elementary truths is seen as a form of political indoctrination when it’s observed in ‘enemy’ countries, but it is never observed as a form of indoctrination in the country you live in. Principles don’t apply here. For example, everyone could see that the public in Leninist Russia overwhelmingly believed they lived a socialist society because of their doctrinal system.  Before Lenin’s tyranny was established, socialism meant workers having control over the means of production. But everyone outside the country could see that it was a tyranny, and that control over the means of production was not worker controlled but centralized under the command of the vanguard. One could ask if Russians would have benefitted if their school system put forth some elementary truths, that their society was a tyranny.

In the same way that Lenin tried to exploit the term socialism in an effort to present his society as fair and just, we can trace back the roots of how this was done in western society with the term ‘democracy’. David Graeber makes a reference to this in his book called ‘The Democracy Project’. Noting that elites despised democracy in the early 19th century, but when the US president Andrew Jackson saw that this political ideal appealed to the masses, he exploited this as a form of modern day marketing strategy using it in his campaign, claiming to be a democrat, and winning his election, which made such an impression that the other elites quickly copied his strategy.

I think almost everyone nowadays would agree that teaching these elementary truths would have had a liberatory effect. But then again, our school system is not designed for the purpose of liberation. As the treasury put it clearly and explicitly in their 1987 document ‘Government Management’, “Historically universities may have acted as a key source of free information and discussion on political and other sensitive issues. In the information age this is no longer the case.”

“Douglas Renwick is a young adult studying mathematics and philosophy at Victoria University. In matters of politics and economics he is entirely self educated. His political goal is to defend humans from the massive assault on rationality led by corporate and state institutions.”