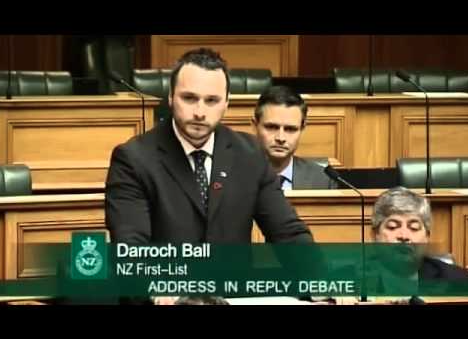 Without a doubt my favourite MP from New Zealand First’s 2014 intake is Palmerston North-based MP Darroch Ball. (Ron Mark doesn’t count, coz he’s been around before)

There are many reasons why this is so, ranging from his longstanding positive relationship with NZ First Youth, through to my considerable enthusiasm for a secret project he’s working on that I’m not at liberty to write about yet (but watch this space).

But the thing that really tipped me over the edge and which I thought deserved highlighting right here on TDB was Darroch’s response to the euphemistically termed “Hardship Reduction Measures” contained within last week’s Budget.

When diagnosing the underlying causes for the situation of systemic and entrenched poverty which National claims to be responding to, Darroch’s thoughts almost exactly mirrored my own.

“Let’s never forget it was National, and the ‘mother of all budgets’ in 1991 that severely cut welfare, and they have taken the axe to it in many ways since. National has turned a country of reasonable equality into one of appalling inequality.”
Or, as I might have less prosaically put it … looking to National to provide a solution on the issue of child poverty is rather like asking a mosquito about possible cures for Malaria. (I would have said “like asking Tony Blair for a solution to intractable conflict in Iraq” … but then remembered some geopolitical comedian had, in fact, made Blair something called a “Middle-Eastern Peace Envoy”)

Darroch is right when he states that “the Budget payment of an average of two dollars a day does not improve the health and education of a single child.”

He’s also completely correct to point out that this “tinkering around the edges in a haphazard approach” from National merely means “supported poverty” rather supporting people on a pathway out of the deprivation and desperation of economic want.
But NZ First’s social development spokesperson didn’t just tell us why these blatantly inadequate measures ought to be opposed in favour of something better.

He ensured that his words were matched with action where it mattered – in the House, with our votes.

Now you might be forgiven for wondering what’s so special about that. After all, speaking in opposition to Government policy where it’s deficient and voting accordingly is something that every Opposition party does. Indeed, it’s our job.

But where other parties were apparently quite content to vote in favour of measures they agreed with New Zealand First in deeming wholly inadequate … only NZF actually had the guts and the gumption to actually oppose National’s bill in both word AND deed, voting against same in the House.

(Between this, and previous incidences of parties such as Labour failing to follow up vocal opposition with actual votes in the House, it’s no wonder people are increasingly coming to see New Zealand First the true leaders of the Opposition in Parliament.)

Make no bones about it. While a pittance is better than absolutely nothing, this Budget was not a serious stab at eliminating or even just ameliorating the endemic poverty which exists here in New Zealand.

That would have required actual, tangible efforts at job creation; and a far more realistic increase in the dollar value of benefit payments.

Instead, we got the biggest exercise in cosmetic “concern” for the casualties of caustic Neoliberalism since John Key paid a visit to McGehan Close way back in 2007.

And while National may protest that its “Hardship Reduction Package” is at least an acknowledgement that there is a problem with the way it’s been playing at economic management for the past six years … it is in no way, shape, or form a solution.

Instead, might I be so bold as to suggest that there’s only one “Hardship Reduction Package” involving National that’s actually worthy of the name.

Voting for a Party which resolutely believes in a “comprehensive plan that ensures our welfare safety net is real.”

Can you smell what Darroch is cooking?