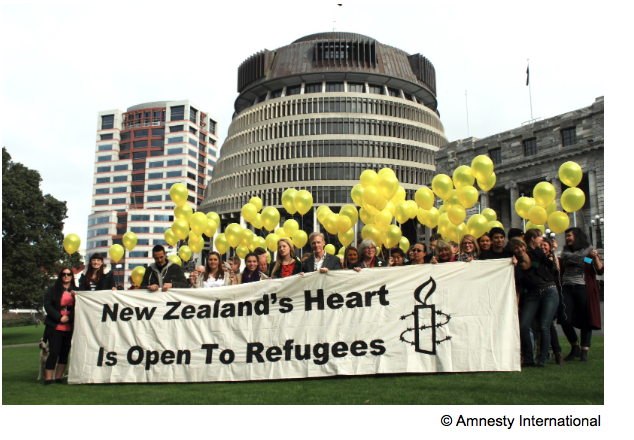 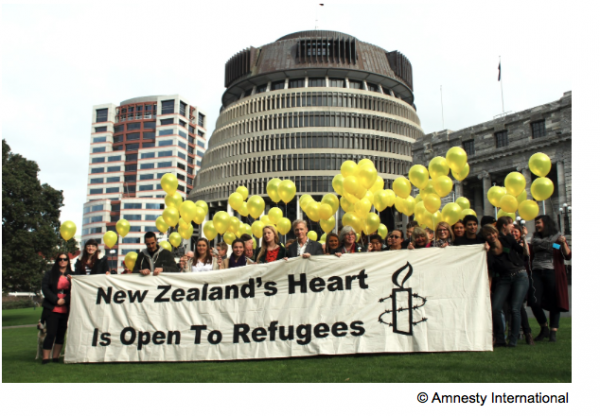 Say cheese for refugees. The chanted slogan may have sounded slightly corny but the intent behind it was genuine as around 100 Amnesty International supporters converged on the steps of Parliament in Wellington on Saturday.

The banner unfurled and with a 10 metre message they made themselves clear – “New Zealand’s Heart Is Open To Refugees”.

The question unfortunately though is – is it really?

The chorus of voices speaking up on the issue is certainly growing louder, from Dame Susan Devoy to perhaps a somewhat unlikely Winston Peters.

With the photo action outside of Parliament spurred on and underpinned by urgency as more and more crises unfold with desperate and vulnerable civilians bearing the brunt – to those who gave their Saturday to send a message to the New Zealand government the answer couldn’t be clearer – how can it not be?

Over the past few weeks we’ve all watched in horror as reports and images have come in of thousands of men, women and children, stranded off the coast of Indonesia, Malaysia and Thailand with little food and water and in need of urgent medical attention. Not only have they been on boats in harrowing conditions for months, abandoned by their crew, some of those who did manage to reach the shore were turned around and towed back out to sea, left to slowly die.

Among them are thousands of Rohingya refugees – an ethnic minority fleeing persecution in Myanmar and Bangladesh, where they are denied citizenship rights and subject to violent, systemic persecution.

Last week, we saw some good progress on this issue as Malaysia and Indonesia announced they would take in 7,000 of those stranded. Unfortunately, this is falling short of what’s needed, as there are likely many more people stuck on boats, and most won’t make it ashore without help.

In an emergency summit in Bangkok this Friday 29 May, countries of the region will meet to tackle the crisis.

And a crisis it is, making it even more undeniable that the world is facing the greatest humanitarian crisis of our time. From the waters of Southeast Asia, to the Mediterranean crisis and the four million Syrians who’ve had to flee their homes.

It highlights why countries like New Zealand must do more for refugees. As it stands New Zealand’s current intake of refugees sits at 750 people, a number that has remained unchanged for nearly 30 years, and one that sees New Zealand trailing behind at 87th in the world for its refugee intake.

Yes the programme that runs here is well done, but no one is suggesting that quality should be compromised for quantity. The problem is it’s a tiny programme and New Zealand can and should be doing more for for some of the world’s most vulnerable people.

Prime Minister John Key was right when he recently said it’s not about numbers. It’s not, it’s about people.

And the difference that resettlement in New Zealand can make to even one more person is immeasurable.