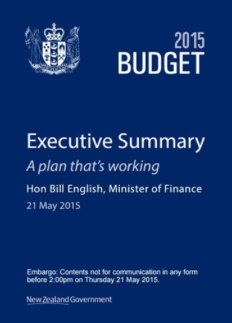 Trust the government to sneak in the word ‘working’ in its budget title   “A Plan that’s working”. This tells us what is really at the heart of this package: not children’s needs, not child poverty, not poor beneficiaries but a continuance of the ‘relentless focus on paid work’.

Enough of the praise.  While politicians may have opened their eyes for the first time to glimpse the social disaster in our midst, this package offers no protections for 21st century uncertainties. It  gives no poor child a cent more until 2016, leaves out vast swathes of the poor; ignores the social deficit and fails to grapple with any of the structural issues in welfare or tax credits.

After months of detailed finicky tinkering  the government produced 3 main sources of income increases (but not until 2016) to address child poverty;

First the benefit increase. While it is the first time that benefits have increased by more than inflation, they were cut in real terms in 1991 and many on benefits had then cut back again in 2005 when Working for Families introduced. Remember too they are adult benefits and the increase is more than needed by all adults on benefits not just those with children. While the sole parent payment is more than the single rate of Job Seekers, its higher rate reflects that being a sole parent is more like being an invalid than being a single unemployed person. What I find most distasteful is that in one fell swoop they have reversed the tiny bit of rational thinking to come out of the direction of welfare reforms in 2005 that saw the removal of the child component from the benefit rates themselves. Numbers and ages of children are much better reflected by a per child, per week, payment and Working for Families was supposed to do this.

Thus Working for Families was  geared to meet the needs of children; welfare benefits the needs of the adults. Re-introducing a family element in the adult benefit rate is a very poor way to help children. For example in a 4-child 2-parent family the $25 has to be shared among 6 people.

Figures produced by Jonathan Boston and Simon Chapple shows how woeful the $25 is for families on benefits. To reach the lowest 50% after housing costs poverty line, a couple with 2 children requires $184 more and $286 per week more to reach the 60% line. It is also clear that many beneficiaries with children will get far less than $25 once there have been offsets to the Accommodation Supplement, income-related rents, Temporary Additional Support and the extra costs of more work demands.

There is no free lunch, not even one that doesn’t get eaten until next year. The work requirements of 20 hours for mothers whose youngest is 3 is social engineering at its worst. It means a huge commitment to expensive daycare.  Forget it being 20 hours free that is a sorry myth. Too much time in poor quality childcare or simply when the child is not ready, is not in the interest of the child or mother.  The government wants its pound of flesh even when jobs markets that are far from buoyant and fails to see that mothers are already working taking care of their own young children and are capable of deciding for themselves what is appropriate or not for their child.

Community Law Christchurch have just written a 200 page report confirming how oppressive WINZ is for those on benefits.  Access to Justice for Beneficiaries says:

The new work requirements intensify the control and surveillance.  There is no appreciation that young mothers on benefits are time poor.  Worryingly there will be more and more bureaucratic interventions in their lives, more meetings and more hassles and threats of or actual sanctions.

Lets see what is behind the trumpeted new found generosity for so called ‘ working’  families. The $12.50 for the In Work tax Credit is just the inflation adjustment that families ought to have had since 2006. The other $12 extra per week than the very lowest income families may get is  very ill-explained in the budget.

The game plan is to use a carrot to move sole mothers off the benefit.  But at what cost?

Mothers on Sole Parent Support who work 20 hours at the minimum wage earn $295 gross. But how disheartening for them because every dollar earned over $200 a week produces a loss of close to a dollar, or over a dollar when there is a student loan to repay. That is, earning the last $95 dollars ie working the last 6.4 hours can actually make them worse-off after tax and benefits loss.

The situation can be even worse for couples on the Jobseeker or Supported living payment who begin to lose their combined benefit from just $80 between them.

The Government is effectively telling the sole parent who achieves 20 hours paid work  to leave the benefit system. As she can’t live on just $295 gross a week she will be topped up, with another payment called the Minimum Family Tax Credit (MTFC), to net $23,036 (up by another  $624 from 1 April 2016). She can also get the In Work Tax Credit.

Most people have dosed off by now but stay with it, this is important. Only 4000 families are expected to get up to the $12 extra per week from the MFTC.  Yes, that is right. The third trumpeted part of the budget changes delivers practically nothing and despite the hype will cost the government just $1.8 million per annum.

Those who do go off a benefit and onto this very weird tax credit will find life is much less secure and the incentives are utterly perverse. She will lose the MFTC dollar for dollar if she has a pay rise or extra, earned income.  That is, she faces a  whopping 100% effective marginal tax rate. So much for work incentives. 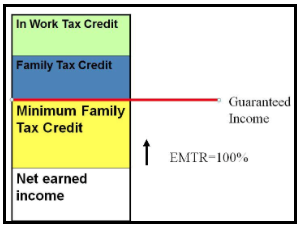 Ironically, the State may pay her more on the MFTC and IWTC than if she remained on a part benefit, but her situation becomes far more precarious.  She is only entitled to the MFTC and the IWTC so long as she maintains 20 hours per week. The kids get sick, or there is a downturn, she loses the security of the guaranteed income and will have to fight her way back onto a benefit. Any overpayments of the tax credits will have to be repaid. Her case manager/faceless private WINZ contracted agent will not be happy if she tries to return to the benefit system. What does she live on the meantime?

CPAG believes that the government needs to spend $1 billion per annum on fixing Working for Families, see Step change for children. These changes would greatly simplify Working for Families and make it much fairer and far more effective in addressing child poverty.