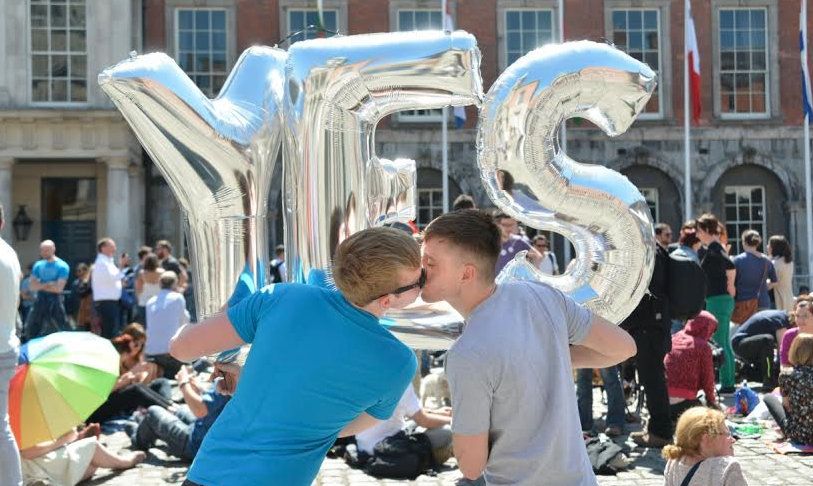 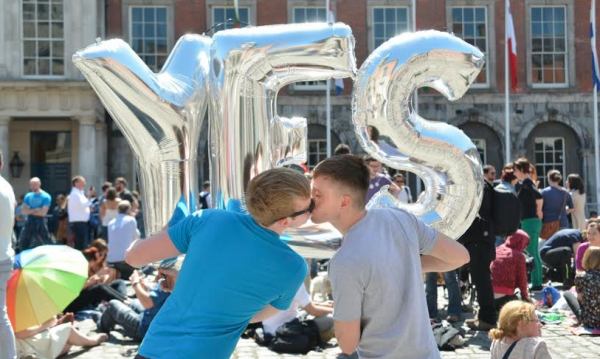 People around the world were celebrating this weekend due to the decision by Ireland to legalise same sex marriage.

As a member of the affected community this feels positive and I believe it is a wonderful thing with 75% of respondents voting a resounding ‘YES!’ That is a powerful and happy response and I am grateful to my loved ones in Ireland who I know have advocated passionately for a ‘yes’ vote to all of those around them. These kinds of social changes do flow very much from person-to-person and are built on a huge network of loving relationships and this is a time for a momentous celebration. As I reflect upon this win there are a few points I’d like to add to the discussion from a radical perspective.

Ireland has a particularly unique situation in which prevention of gay marriage was part of the constitution; furthermore there is a requirement that all constitutional changes must be decided by referendum. One of the hardest things for me I think has been considering how it must have felt for the small rainbow community to have their fate being decided by an intense process of public approval. It is heartening that public approval was on their side. Though what if it were not? Bearing in mind here that the affected community are not around 10% as many would believe due to old information garnered by Kinsey, but more updated studies would put the percentage for LGB (studies record and interpret information differently, but this is how some qualify sexual behaviour) at roughly 3% all up. We are talking about a small percentage of people being drastically affected by the focus of public opinion.

While I realise there was no other possible way for this change to come about in Ireland, I tend to be of the view that the right place for equality and rights-based discussions isn’t through the court of public opinion, because your rights should never be based on the approval others have for you but the fact that you are human and you have the right for the protection that those rights provide. Decisions like this should never be made by referendum, but are better decided in a specialised environment through the process of reason alone.

I just want people to imagine how disproportionately focused upon people in the rainbow community may have felt during this time. It would be like running a gauntlet. A friend spoke to me of needing to see the ‘no’ propaganda everywhere as a part of this process and how disturbing and sad it was. If you think about it, it could actually feel like a harassment of the community, like our equality is about popularity and not about our right to be treated like everyone else.

In my mind people should not need to vote on that. The request for equality in this instance is quite basic. It scares the heck out of me that lots of people would naturally approve of this process without questioning it.  If my equality is ever based on everyone else thinking I’m an OK person who “deserves” it then we have a problem. In no situation should your right to be treated equally be a reward for being popular or approved of.

If public opinion were the only measure we used to make decisions on human rights and equality we would be in trouble, because of racism, prejudice and bullying and how these fluctuate in terms of their influence at different points in history. Someone said to me “It is pretty uncomfortable that the empowered majority get to choose whether a minority gets rights that will hardly impact the majority at all. In this case of course it was a necessity – but in general it does feel a bit off.”

Outspoken critics were also bringing up the abortion issue in Ireland.

While it is fair to say that people ought not try to take away the pride and joy involved in the strong positive response, I think there is a space – as we reconcile and ruminate – to recognise that abortion is an issue that affects the rainbow community as well. Critics might well recognise that the same people who voted liberally on the gay marriage issue would also vote against abortion being reformed. The radical message may well be “yes, we are grateful for your support but remember, if you are against abortion you’re also against people taking ownership of their bodies which is an issue that strongly impacts upon the rainbow community, so please consider your stance on this as well.”

Another radical perspective comes from a group called ‘Against Equality’ (and that sounds inflammatory) but they have a point. They discuss ‘queer challenges to the politics of inclusion’. They feel that the issue of equality is often reduced down to this idea that there are three benchmarks to be met and once they’re met ‘equality’ will have arrived. These benchmarks are typically; the right to participate in military, the right to equal protection under the law, and the right to marry. It is arguably the case that issues of class and ethnicity play a huge role in determining whether or not the entire community has anything that feels like equality. I would even argue that equality isn’t the aim, the aim is to ensure that people have fairly equal access to safety and provision for their needs. Solutions have to be far more involved than simply fixing equality laws (although important), and this is especially true of affected youth. Hopefully the body of people who support the rainbow community both in Ireland and New Zealand will take time to consider that it’s not just law alone that needs to change and will wholeheartedly support all of the initiatives that people need in order to secure their sense of safety. I want to make special mention of the fact that transgender people are often excluded from the sphere of social protection by supporters of lesbians and gays including those running our government and this needs to change. I can’t speak for the situation in Ireland. Some feel these kinds of legal changes provide a false sense of security to many people when their lives won’t noticeably change and they’ll still experience the kind of hardships in their lives precisely because it isn’t just law that leads. However, in this instance 75% is not just a response, it is a strong response, and we hope that the interpersonal treatment of the rainbow community is substantially more positive generally because of just how strong that response was. Essentially this perspective states that have to consider meeting the actual needs of the community, as well as just providing support with law changes.

Overall it was a spectacular result that shows that the rainbow community have received greater acceptance and support by the public of Ireland. That is a momentous achievement by advocates that I am sure is the result of people dedicating their entire lives to passionately advocating for their community. Well done!