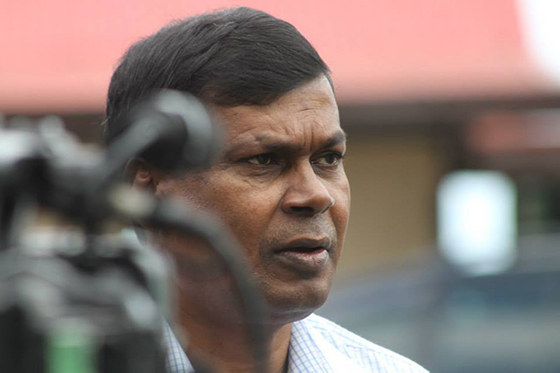 PROFESSOR BIMAN PRASAD has long been outspoken about the state of the media in Fiji. He had a simple but staunch line throughout the election campaign about the Media Decree: It had to go.

Back in 2008, two years after the Bainimarama military coup, he teamed up with University of the South Pacific journalism academic Shailendra Singh, to produce a courageous book pulling together a collection of papers about democracy and the media in Fiji.

So it was no surprise that would he would test the decree by tabling a motion in the Fiji Parliament last week to remove or modify the invidious and misguided legislation.

And although it was defeated,  24-17, it was interesting to see the number of absentions (9 on the government side). The motion wasn’t defeated as heavily as it might have been.

Worth another shot soon.

Although the motion served to generate some debate and there has been media coverage, opposition National Federation Party leader Dr Prasad’s speech deserves to be published in full:

Madam Speaker I rise to move the following motion:

“That this Parliament supports a review or a repeal of the Media Industry Development Decree 2010 to ensure Fiji has a free, fair and unfettered media industry in conformity to a modern democratic nation.”

Madam Speaker, this is not a political motion but simply a necessity in a true and modern democracy.

Fiji’s future as a social, economic and politically stable nation cannot be guaranteed unless freedom of expression is enshrined through a free, fair and credible media.

We firmly believe, Madam Speaker, this is not pessimism but a reality.

The media industry in this country has been under siege since the military coup of December 2006.

For more than  5 years, especially after the abrogation of the 1997 Constitution on 10th April 2009, have been turbulent and devastating for the media industry and media organisations.

The work of the media industry, especially after the start of the coup culture in 1987, has been remarkable, balanced, informative and impartial, except for a brief period after the 1987 coups.

However, Madam Speaker, the enforcement of media censorship under Public Emergency Regulations after April 2009 until January 2012 and the promulgation of the Media Industry Development Decree 2010 has seriously undermined media freedom.

Media throughout the world is generally regarded as the Fourth Estate – the last line of defenders of democracy, human rights, dignity and justice.

Article 19 of Universal Declaration of Human Rights states, “Everyone has the right to freedom of opinion and expression. This right includes freedom to hold opinions without interference and to seek, receive and impart information and ideas through the media regardless of frontiers.”

Madam Speaker, this freedom and right is reposed in the people, which the State and politicians must respect at all times.

The Media Industry Development Decree is regressive and suppresses Media Freedom because it imposes restrictions and prescribes heavy penalties.

This Decree must either be repealed or amended substantially because we believe the media should not be regulated by the State or any Government.

Madam Speaker, the restoration of Parliamentary democracy has seen little change in the behaviour of large sections of our media and individual journalists – and there is a reason for this – it is not the choice of our media industry and journalists but a result of the severe penalties in the Decree that I will outline.

The Media Industry Development Authority is essentially an enforcer of Government’s agenda as far as the media is concerned. In January this year, the MIDA Chairman  spoke about the need for focus to shift on freedom of expression and ethics. Words are mere rhetoric.  The  Decree renders freedom and ethics meaningless.

Madam Speaker, Part 2 of the Decree outlines the structure and functions of the Media Industry Development Authority. The minister appoints the chairperson and five other members, and can also remove them. This is an obvious and major conflict of interest.

While the media is bound by restrictive rules and regulations, the media authority can act with virtual impunity. Where is the balance and fairness government is preaching about? Where is the accountability, Madam Speaker?

Section 22 states content must not include material, which is (a) against the public interest or order; (b) against national interest; or (c) creates communal discord. This is a very broad provision open to interpretation by the government.  It is like a noose around the media’s neck.

Madam Speaker, This provision is unnecessary because  offences are already adequately covered under Crimes Decree, under the Public Order Act on racial and religious vilification, hate speech, and economic sabotage.

Part 5, covering enforcement of media standards, allows the Authority to force the disclosure of specified documents or information as well as the right to enter, search and confiscate documents.

When it comes to breach of confidentiality, the standard practice in democracies is that it referred to the Courts, which rely on precedence, and can be expected, to come up with fair, impartial judgments.

But in Fiji, Madam Speaker, this function has been usurped by MIDA, which is controlled by government through appointments made by the minister. This is yet another noose around the media’s neck.

Media Tribunal
Part 8 deals with the Media Tribunal, which consists of a Chairperson – a qualified judge appointed by the President on the advice of the Attorney-General.

The Tribunal adjudicates complaints received from MIDA. It has to comply with the directions of the responsible Minister pertaining policy. The Tribunal also has to consider the Attorney General’s submissions during certain proceedings. It makes hearings vulnerable to political interference.

Madam Speaker, It increases the level of government control and pressure on the tribunal. This is by no means an independent tribunal. It is tied to government in too many ways. It may not be happening but this provision is unethical and not transparent.

Madam Speaker, this is unnecessary, especially when we have defamation laws in place. It’s an example of a duplicitous and tricky legislation – a waste of time and resources. Such payouts can ruin media companies and journalists. To protect themselves, journalists and media companies  resort to self-censorship. This is a fact.

Madam Speaker, Media organisations can challenge decisions in the Court of Appeal, but only for awards in excess of $50,000. Media workers have no such options, even though the awards can lead to financial ruin in a sector where salaries are low compared to other professions. While the defendants have little recourse, complainants or the Authority can challenge Tribunal decisions in the Court of Appeal. This is another example of the lopsided and one-sided legislation.

Madam Speaker, we have heard in the past of Government justifying  the media decree on social, economic and political stability. However, all that these restrictive provisions have done is push opposition views into anonymous online media platforms, where they have re-emerged in more extreme forms.

People have lost faith in the mainstream news media.  Instead, they are relying on blogs, where people are posting comments, some of which are   full of rumours, misinformation, incitement to racial violence, and so on.

We believe this misguided media policy espoused through the Decreeis to be partly blamed for this sorry state of affairs. Therefore, the media decree has done nothing for social stability.

Balance
Madam Speaker, there is a  requirement that all news stories have to be balanced otherwise they can’t be published.  This is a further sign of legislation simply gone mad. This provision has simply become a loophole to evade media scrutiny by not responding to media questions.

But Madam Speaker, if a story is positive towards the government, this  requirement is ignored without consequence. What we are saying is that the media decree is open to abuse by the State. There are countless examples of this and it is pointless to give them. But it is the reality.

Madam Speaker, every international organisation of repute has expressed concern about the regressive and draconian provisions of this Decree.  Allow me to give a few examples, Madam Speaker.

Reporters Without Borders (a France based non-profit organization which has consultant status at the United Nations and UNESCO): “Revoke the Media Industry Development Decree and its draconian punitive measures against journalists, editors and media organisations and adopt self-regulatory media framework encouraging a free press.”

Madam Speaker, The International Federation of Journalists’ (IFJ) (world’s largest organisation of journalists. First established in 1926, currently, it represents around 600, 000 members in more than 100 countries): It says: “The IFJ is extremely worried that the decree allows the authority and tribunal that it would set up to have the power to call for any documentation, to enter media offices, to seize materials and equipment. It’s extremely worrying that the decree allows for fines of up to about $A300, 000 and or prison of up to five years for a range of offences.”

Freedom House, Madam Speaker, (an independent watchdog organization dedicated to the expansion of freedom around the world): “Violations of the vaguely worded “public interest” or “public order” provisions of the decree are punishable by a fine of up to FJ$1,000 (US$572) or imprisonment of up to two years for journalists; the penalty for any media company that breaches the decree may be as high as FJ$100,000 (US$57,200). In addition, it overrides traditional checks and balances by forbidding the judiciary to challenge the decree or the institutions established by it.”

Madam Speaker, Genuine democracy, equal citizenry, freedom of expression, accountability and transparency, which are ethics being paraded by Government, can only be achieved through a free, fair, credible and non-regulated media.

I commend this Motion to Parliament.