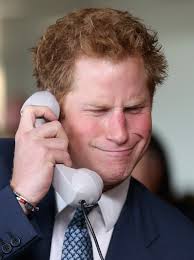 Like so many of the past royal tours this latest by the unemployed Harry was at best a lacklustre affair. As with royal tours in recent years there were none of the huge crowd turnouts of the 1950s and 60s as I was growing up. In those days the royals had widespread popular appeal compared to today when the best Harry could muster were a few hundred here and there and media-inflated numbers of a few thousand in Christchurch.

The general lack of public interest in the antics of this layabout Englishman was in stark contrast to the incredible wall-to-wall media coverage – front pages galore and leading TV news items – usually reserved for an All Black Rugby World Cup win.

Harry’s visit was puffed up to ludicrous levels.

We’re all used to reading drivel pushed on us by the mainstream media but it surely reached new lows this time. Take this from the lead story on the front page of the Christchurch Press yesterday:

“She may be still in nappies but Pippa Judd has already been crowned the girl who captured the world’s most eligible batchelor’s heart.”

This was a seven month old baby who smiled at Harry! I won’t paste any more of this story here for fear you will lose your breakfast reading it.

Needless to say no media thought to ask Harry what he was doing flying military helicopters in Afghanistan or supporting the illegal invasion and occupation of Iraq. In defence of journalists it’s a fact any reporter with such intentions would not been allowed near the happy sloth. The media had already written the story long before Harry arrived. There were to be no embarrassing questions, no inquiring of his support for imperial wars and no questioning of the huge waste of UK and New Zealand taxpayer funds to get him here.

Much more newsworthy was last week’s story revealing the extent to which Prince Charles – Harry’s ne’er-do-well father – writes to government ministers in the UK in an effort to influence policy. On the one hand he has as much right to write to a government minister as anyone else but his constitutional position means he shouldn’t. The separation of the British parliament from the predations of kings and queens was a hard-fought battle over many centuries but despite this UK government ministers, including Prime Minister at the time Tony Blair, met with Charles to discuss his concerns on a wide range of issues.

This much more important story made the papers but would have been missed by most. Instead we were force-fed a pile of royal rubbish – more closely resembling the reality TV show The Batchelor than any connection with our day to day lives.

New Zealanders have been deeply demeaned once more by media coverage of a royal tour.