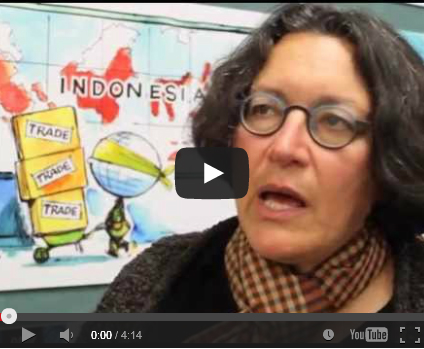 COINCIDING with the visit by renowned Haaretz journalist Amira Hass to New Zealand in the past couple of weeks, Al Jazeera has been running a repeat of the brilliant programme “The Architecture of Violence” in the Rebel Architecture series.

In this, architect and communicator par excellence Eyal Weizman explains how Israel has transformed urban warfare and how the techniques are used to subjugate Palestinians.

Travelling across the illegal settlements and roads of the West Bank and also along the Separation Wall, Weizman shows how the controlled use of architecture is deployed to consolidate the Israeli grip on Palestine.

“Architecture and the built environment is a kind of a slow violence,” he says.

Having watched Weizman’s documentary a couple of nights before the Pacific Media Centre hosted Hass for a talk at AUT University on the theme “Dilemmas as a ‘non-objective’ journalist”,  Amira Hass’s insights really resonated with the Café Pacific publisher.

The core themes reflected what she also spoke about in Australia. For example, Green-Left’s Narendra Kommalapati reported how she spoke about Israeli governments deliberately rejecting the Palestinian offer in the 1990s to have a state based on only 23 percent of “historical Palestine”.

Accepting the offer would have meant recognising Palestinians as equal and ending the colonialist project of Israel and ending the privileges of Jewish Israelis, a task Israel’s rulers were not prepared to undertake.

The inbuilt racism of Israeli society can be seen from the fact that more than 18,000 Palestinian refugees in Syria are trapped in Syria and cannot return to the place where they have roots.

Yet anyone in Australia who is Jewish can become a citizen of Israel within days, have complete freedom of movement and pass on these rights to relatives anywhere in the world.

Any Jew anywhere in the world has greater rights in Israel than any Palestinian. While this reality is unquestionable to many Jewish people, reality does not make it just, Hass said.

Before Amira Hass’s talk at AUT – just three days after the World Press Freedom Day had been observed globally – the hosts raised the issue of an attack on a Palestinian journalists’ demonstration for free movement, which left the local journalists union leader and two others wounded.

Pacific Media Centre’s Pacific Media Watch freedom project reporter/editor Alistar Kata interviewed Hass after the seminar, and this is how her report summed up the meeting:

The common imagery of Israeli airstrikes, destruction of property and the loss of human life is how international audiences see the Israeli-Palestinian relationship.

But Israeli journalist and author Amira Hass says the issue also needs to be covered when violence is not happening.

This is so audiences can “understand that there is an ongoing violence on the part of the Israeli occupation that does not necessarily have to be quantities of blood”.

Palestinians faced bureaucratic violence as part of their daily lives.

Hass spoke at a seminar at the Auckland University of Technology … about her experiences and “dilemmas as a ‘non-objective’ journalist” in reporting the Occupied Palestinian Territories.

She said the first role of journalists was to “monitor the centres of power”.

“Our main target is to monitor power to see what it does to people – usually it is a lot of harm.”

Hass spoke at Otago University, Auckland University and AUT, and always to a packed audience.