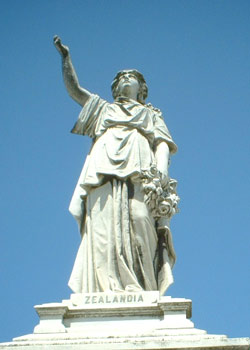 THERE ARE TIMES when it’s heart-breaking being a New Zealander. This past week has been one of those times.

The week began with the deafening drumbeat of ANZAC-related patriotism. Having already alienated a huge number of Australians, the almost obsessive memorialisation of the First World War is beginning to do the same to a growing number of New Zealanders.

Among all the individuals responsible for planning the centennial “celebrations” of the ANZAC landings, there was, apparently, no one whose job it was to make sure, one hundred years on, that New Zealanders had a clear idea of the political and economic motives that drove so many of human lambs to the slaughter.

The historical context out of which some young men volunteered for “the adventure of a lifetime” and some did not (let’s not forget that by 1916 it had become necessary to start conscripting replacement soldiers) has been almost completely elided from the official narrative. Likewise the extraordinary curtailment of civil and political rights that followed almost immediately upon New Zealand entering the conflict.

To hear someone like Lieutenant-General Tim Keating, Chief of Defence Staff, couch New Zealand’s participation in the First World War in terms of standing up for the right and the good (just like today in Iraq!) was quite sickening. More than 18,000 young New Zealanders died on the battlefields of that terrible war – not for the right and the good, but for the greater glory and profit of the British Empire and its principal investors.

I wonder if Lt-General Keating even knows that William F. Massey, the unelected Prime-Minister of New Zealand in August 1914 (his Reform Party had won a No-Confidence vote against the Liberal’s in 1912) was a member of the British Israelites.

This bizarre sect was a curious mixture of religious and patriotic enthusiasm which believed that the British race was descended from one of the lost tribes of Israel, and that the British royal family’s bloodline extended all the way back to King David and King Solomon. The British Israelites were adamant that the English-speaking peoples were divinely ordained to rule the entire world.

Born in Ulster, Massey was also a member of the Orange Order, whose compatriots back in Northern Ireland, even as Gavrilo Princip was assassinating the Archduke Franz Ferdinand in Sarajevo, were actively plotting mutiny and rebellion against the pro-Irish Home Rule Liberal Government of Herbert Asquith.

Massey’s religious and political bigotry would be drawn into sharper focus as the war drew towards its end and the Reform Party linked up with the newly-formed Protestant Political Association to mobilise voters against the large number of Irish Catholics who had swung in behind the nascent Labour Party.

Massey’s hostility to organised labour was prodigious. The crushing of the Waihi Miners’ Strike in 1912, and of the Great Strike in 1913, were among Massey’s first and most enduring contributions to New Zealand’s political history. Working-class Kiwis didn’t call the mounted special constables (drafted in from the countryside to smash the unionists of the “Red” Federation of Labour) “Massey’s Cossacks” for nothing.

I could go on, but hopefully you’ll have some idea already of how little that was “good” or “right” lay behind New Zealand’s participation in the First World War. Indeed, it was only after the outbreak of revolution in Russia in 1917 (and the mutiny of the French army in the same year) that the imperial establishment decided it might be wise to shift its rhetorical emphasis from protecting innocent women and children from the bestial Hun to “defending freedom” and “making the world safe for democracy”.

So many lies – and how old they’ve grown! It is nothing less than shameful that so little of the history of the period leading up to the First World War is known to the young New Zealanders who turn out in their thousands to honour the sacrifice of those who they naively believe “died for our freedom”.

And what, I physically cringe to think, do those same young New Zealanders now make of their 53-year-old Prime Minister, who has admitted to repeatedly tugging on the ponytail of a 26-year-old waitress?

Is this really where we are, 100 years after Gallipoli? Is this how far we’ve come? From a bigoted British Israelite and union-buster; to a “relaxed” golfing partner of the US president and a “playful” hair-fetishist? From dispatching troops to Gallipoli in the name of the King-Emperor; to dispatching troops to Iraq in the name of the “Five Eyes Club”?

And what about the likes of your humble correspondent? That endangered species known as the “Fourth Estate”? Are New Zealand’s journalists, commentators, newspaper columnists and bloggers to be guided now, in the fulfilment of their professional ethical obligations, by the shining example of Rachel Glucina?

As I said: These are heart-breaking times.