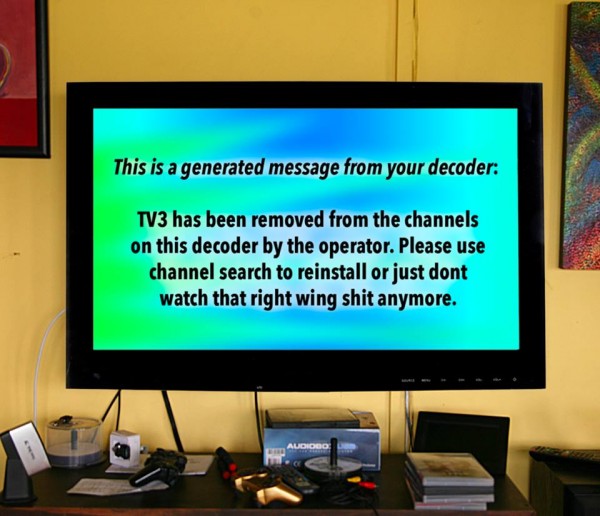 The Nation was on this morning, but given the mindset of news by MediaWorks Chairman Rod McGeoch, one wonders why bothering to watch it ever again…

So if that’s MediaWorks attitude towards news, I take it that attitude extends to all their political programming shows, which would help explain the near silence by The Nation on the Campbell Live issue. I tweeted the Nation asking why they were silent, their response was telling…

…there are more important stories than political and corporate interference in  a current affairs show? Really? Making a joke about Save Campbell Live in their 60 seconds satire piece isn’t discussing the issue, it’s sidelining it. At least we now know why The Nation always pull their punches and sides with the right.

The reality is that MediaWorks position on news is more damaging than the revelations that most of the mainstream media worked hand in glove with the dirty politics smear team of Cameron Slater & Co. If MediaWorks see their role purely as profit driven over any democratic obligations to the fourth estate then the entire charade is made redundant.

Many media are still struggling to gain back any respectability after they were outed as working with Slater, knowing that MediaWorks  is simply pimping for the news market doesn’t help.

If Labour are serious about public broadcasting they need to give it to an MP with real mana, like David Cunliffe.

In terms of todays Nation programme, it was as dull as death. Laila on the panel was the only highlight. It’s incredible that the Nation still managed to avoid discussing the threats to Campbell Live again for a second week running, but then again when their bosses attitude is “We put news on, but only because it rates. And we sell advertising around news. This is what this is all about,”  are we surprised?