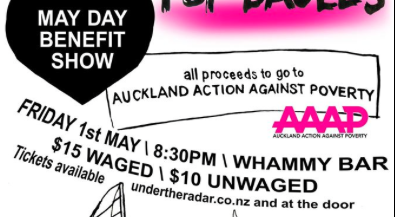 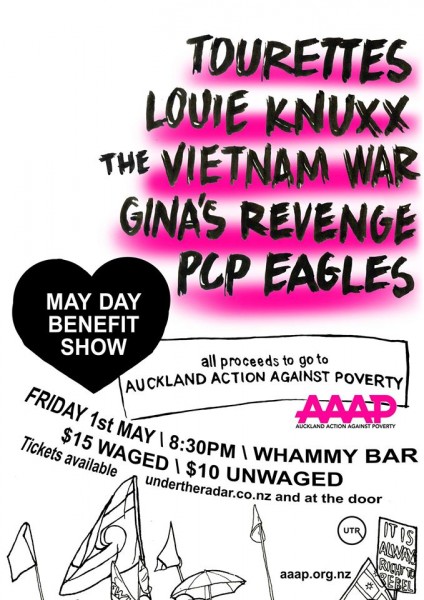 Tickets available through undertheradar.co.nz or on the door.

Tourettes aka Dominic Hoey – Tourettes is a poet who writes about politics, childhood and his girlfriend (mostly his girlfriend). He’s released two poetry books and four studio albums and has just finished his first novel.

The Vietnam War – The Vietnam War are currently working on a new album to follow up their self-titled debut, widely regarded as the best album of 2012.

PCP Eagles – PCP Eagles grew up in Punk Rock City and spend most of their time at Whammy and New Flavour. The follow up EP to 2013’s I Hate The Mall is out soon.

Gina’s Revenge – Gina’s Revenge are four ladies and a gentleman from AK City who play Rock n Roll music. Former members of Rebelles, Wildwood Lights and Wolfie play songs to drink, dance and be a brat to.

LOUIE KNUXX – Louie Knuxx is a member of art collective YGB, he’s toured the world and has lots of tattoos. His second album PGT/GRR is out now.

AAAP fights for the rights of beneficiaries, the unemployed and low wage workers, so we’re looking forward to celebrating May Day – International Workers Day – with you and these amazing acts.

Activist groups like ours have few sources of funding, so this fundraising gig will be an enormous help for our activism and advocacy.

All proceeds to go to AAAP. With huge thanks to Whammy Bar for having us, Accompany collective for the rad poster and all the bands for providing the fun times.